You should remember us commenting on the Bentley Supersports at the Geneva Motor Show a few weeks back, which despite being the fastest Bentley to date was also the greenest.

This is because the Supersports can run on Tree-Hugging Bio-Ethanol as well as good ol’ Unleaded. Bio-Ethanol produces less CO2 than regular fuels and is a renewable due to the fact it can made from crops such as sugar cane and corn. Other manufacturers have produced similar vehicles such as the Lotus Exige Tri-fuel and the Volvo FlexFuel Range. It is also a popular fuel in parts of South America. There are debates as to the potential of this fuel due the large amount of arable land required to farm the crops but there is one thing for sure, it makes things go very fast! Bio-Ethanol due to some complicated science and engineering produces more BHP than Petrol and propels the SS to over 200mph. 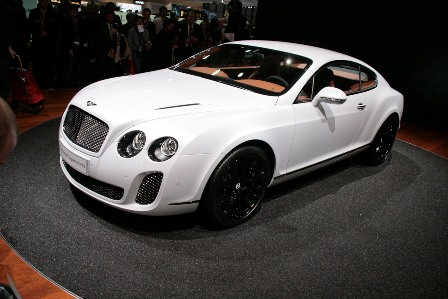 Also – Reports now suggest that Bentley is working on putting an oil-burner in its Arnage Super Saloon. The Arnage is well known for its ultimate luxury, classic looks and monumental power outputs from its V8. Emissions Laws will make these engines a thing of the past as the EU and America introduce stricter and stricter rules. The immense Torque offered by big diesels and the advancements in particulate filters mean Bentley should be able to keep the lightspeed performance without falling foul of regulations. The Engines will most likely come from Audi who has developed a reputation for rapid diesels, they even race at Le Mans with a diesel powered race car. The Range Topping Q7’s engine is the most likely candidate for the Arnage. The 500bhp V12 TDI has 738 lb-ft of Torque and could be developed into an even more powerful version should you need your internal organs re-arranged.

Is this a bad thing? I don’t think so, its just progress and as long as Bentleys continue their tradition of going sideways in a cloud of tire smoke then I’m all for it.