Anybody who’s ever looked at a Formula 1 race, or even a rally, and thought to themselves “what this needs is less natural light and more spotlights” will no doubt be interested to see this novel idea for a race. Half based on the back of the success from Ken Block and his Gymkhana series, Castrol decided they would get Ken, and three other drivers, and stage an exhibition race between a Lamborghini, a BMW, an Audi R8 V10, and of course Ken Block in his Ford ST RX43 and a Ford, in the dark.

The race track is entirely black, although hundreds of beams of light are used to mark the route, resulting in an amazing spectacle. For instance, there’s a laser tunnel (which closes in on the driver as he passes through) along with a slalom, a laser box, and something called a ‘laser drift’. So unusual is the light show that one of the drivers, Ken Block, described the race as like “being in an actual video game.”

Of course just a gimick and a marketing stunt, and we won’t be expecting this new style of racing to hit the masses anytime soon. Whilst the video does a good job of distinguishing each driver through well positioned cameras and lighting, it’s unlikely a spectator could do the same. 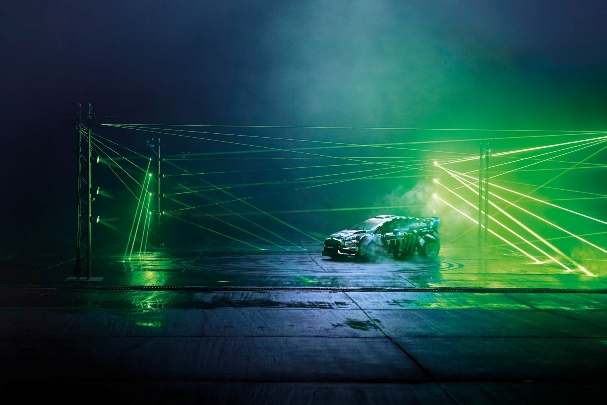