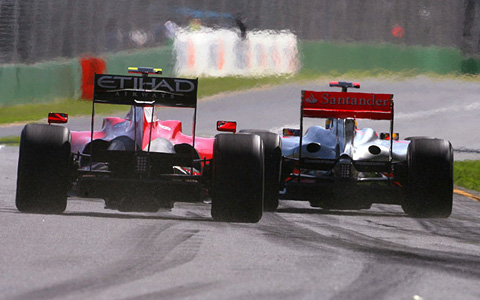 Preview of the upcoming 2009 F1 sason by Dave T from DaveonCars.

The first race of the season is always exciting, the build up, the changes, the speculation, its fantastic. I don’t think I am alone in thinking that this year is the most exciting start to a season we have ever had. So much has changed over the winter, teams have died and been resurrected, massive rule changes have been implemented, the points scoring system was radically changed then overruled and the pace that some teams are showing (or not showing) has made this the best start to a season I can remember.

Here is a Team by Team breakdown of how I see them doing over the course of the season:

Going into testing they were the favourites but things haven’t really gone their way. Lewis Hamilton believes he will not score any points in Australia this weekend due to their less than promising performance in Testing. This has been proven by his lack-luster performance in todays testing in Melbourne. Interesting thing is that Kovalainen seems to be much happier in the car than Lewis. I think that despite their set-backs they will catch-up, the only question is… Will they catch-up in time have a chance of winning the World Championship?

There is no doubt that the Ferrari is quick, maybe not the quickest but very close. I think Raikkonen has a good chance of winning the Championship if he can be consistent. Massa doesn’t seem as Quick in this new car but he will no doubt be fighting for wins by the European Season.

BMW looked like they would be at the front from the outset but todays testing shows that they are not quite as quick as some of the other teams. I predict plenty of podiums and maybe a win or two for Kubica but no World Championship this year.

Alonso looked to be a contender for the race win on Sunday but so far he has been a little off the pace. Still the Renault looks like a quick car and can still win races. Never underestimate Alonso as he is one of the fastest and most experienced drivers on the grid. I think he has a chance to clinch his third title this year if they can continue to make progress with this car.

This team is one to watch in 2009. Not the quickest but close and they have two very talented and consistent drivers. I think they will get their first win this year and do not be surprised if Trulli is sharing the front row of the grid, he is the qualifying king.

I see Williams returning to winning form this year. Rosberg was very fast today in testing with his team mate only fractions behind. Possibly a pole in Australia this weekend and the best opportunity for them to win the World Championship they have had in a long time.

I think Red Bull are going to spend another Season in the middle of the field. Their car is quick but not up to the standards of the front runners. I think Vettel will shine despite this and may even bag a few podiums but his chance to fight for the crown will have to wait.

These guys embarrassed their sister team last year with alot of good points and Vettel on the top step in Monza. They are unlikely to do that this year as the engine in the Red Bull is a closer match for the Ferrari unit in the Torro Rosso. Plus without their star, Vettel they are More likely to be fighting with Force India than the bigger teams.

They have successfully closed the gap this year and I think that they may surprise us in a few of the races. Despite this they will most likely finish bottom of the table because most of the teams are still too far ahead.

I think Brawn and Williams have the best shot at the moment. This could all change very quickly but Button and Barrichello have to be odds on favourites to clinch the title this year based on current form. They have been consistently quick in testing today and although they were not as fast as Williams, I suspect their race-pace is better. We will just have to wait and see.

Tune into BBC One, 0600 UK time to catch the first race of the Formula One Season in Melbourne.