The Honda Civic Type R, here in the UK, is a big deal. The rare first generation was import only and had a loyal fan-base. The second generation was hugely fast in its day, great to drive and featured one of the greatest four cylinder engines fitted to a hot hatch. You had to rev the nuts off it to get the most from it but boy was it worth it.

The third generation Type R moved the game on in the style department with sharp lines and trapezoidal exhausts but many felt it wasn’t as good as the previous car. The suspension at the rear was not on par with the last version and to make matters worse, it weighed more and had the same power. Faster it was not.

After that we had a long gap without a Type R on sale and many hot hatches had moved the game on substantially. So when Honda announced a Turbo-charged 300+hp Civic Type R, the motoring world rejoiced. Would this be Honda’s return to form? 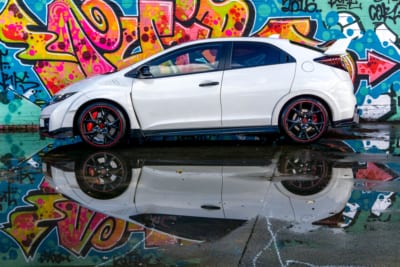 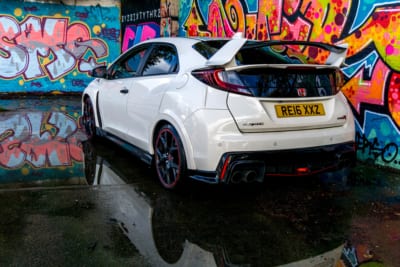 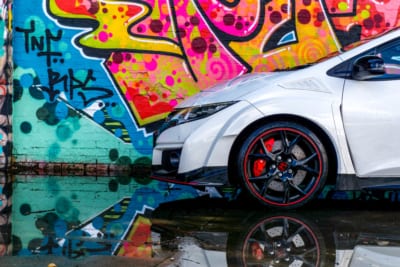 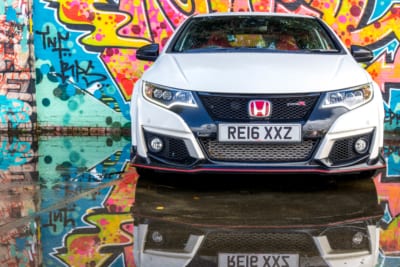 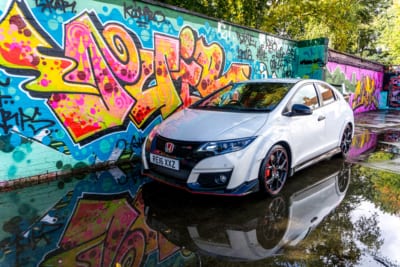 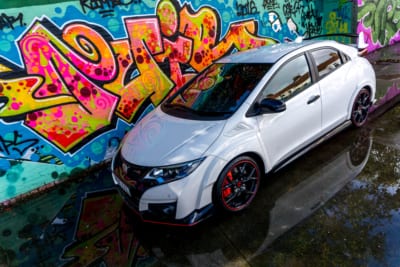 This Type R, based on the 9th generation Civic, is not for the shrinking violets among us. The aggressive face, wide arches, big wing and quad exhausts scream hot hatch to all that can see. Luckily the Civic has the power to go with the looks. Up until very recently it was the fastest front wheel drive car to lap the fearsome Nordschleife at the Nurburgring. A record Honda are very keen to get back with their next generation Civic Type R.

It’s over a year now since I first drove the latest Civic Type R. I had approx. 30 minutes with that car and it’s safe to say we didn’t get along. The Civic felt harsh, overpowered and just a bit intimidating. In the months after driving it, I read countless reports from other motoring writers clearly saying that I had had a completely different experience to the one they had. This time round I had a week to find out if I had judged it unfairly.

Very quickly I found the mistake I had made. Just to the right of the steering wheel there is a small round button marked R+. Press it and the dials glow red and everything gets turned up several notches. The steering becomes slightly heavier, the throttle becomes a touch more responsive and the engine note hardens just a touch. All of this is quite pleasant. The issue is with what it does to the suspension. It hardens an already fairly stiff ride and on anything less than a totally smooth road will ruin the enjoyment of the car. The thing is though, this mode is really just for the track. The car in standard mode is perfectly capable of charging down a back-road at break-neck speed. In the standard mode the chassis on the Type R really shines. Turn-in is beautifully sharp and the car has just enough grip to sling shot you out of most corners at a ferocious rate.

Grabbing the Type R by the scruff of the neck is very intuitive. From the outside it looks like the unruly child but from behind the wheel this Civic has a fluidity and composure that you might not expect. When you are really on it, the Type R bounds down the average UK B-road as fast as pretty much anything out there. Most importantly though it’s fun as well as fast. It never full dull or restrained. Unfortunately, that is where the Civic Type R sometimes suffers. When you are pushing on it is truly one of the very best front drivers but at more sedate speeds it is a little harsh and rough around the edges. Also there is not getting away from the fact that this is a front wheel drive car with over 300hp. Try to apply too much power at the wrong time and it does struggle. These are relatively minor niggles and the later almost disappears once you get to know the car a little better. Overall the Civic is thoroughly addictive to drive and never ever dull.

Under the bonnet hides that controversial turbo’d VTEC engine. And what an engine it is. It packs a serious punch. The 0-60 dash is despatched in just 5.7 seconds which is all the more impressive when you remember all that power is going through the front wheels and if allowed to, the Civic Type R will go onto a top speed of 167 mph. Certainly knocking on hyper-hatch territory.

Prod the red starter button on the dash and the engines sparks to life with not-unpleasant bass-filed tone. Unfortunately, once running the noise is less than exciting and can at times sound a little clattery. This engine is happiest, like most Hondas before it, at the higher end of the rev range. It still isn’t an audible delight but at least it sounds like you would expect a Type R to sound. It sounds angry and fast.

Getting the Civic off the line smoothly can be an interesting feat thanks to all that power. Treat it kindly at first and then you can unleash the full force of the 300+hp catapulting you up the road like a missile. In-gear acceleration is where this car really shines though. One evening with the car I was entering a dual-carriageway via a fairly inclined slip-road. In front of me was a brand new Mercedes ML63 AMG with around 520hp under their right foot. He or she floored it (you could smell the unburnt fuel coming from the quad tail pipes) but it couldn’t shake the little Type R. The old Type Rs were always fast but this thing is in a new realm. Once rolling I honestly think it would keep a Focus RS honest in most situations and would probably be faster in tighter, twistier stuff.

This is an area of the Civic Type R that divides opinion. Most males seem to think it looks good but with some flat out ashamed to be seen in it. Girls on the other hand almost unanimously dislike the OTT styling. Subjectively I quite like it, especially in Championship White (which I specifically requested from Honda’s press team) but if I’m honest it’s not something I think I could live with every day. That wing is just a bit too extreme and the slightly fussy body-kit makes it stand out in just the wrong way. The thing is though, I am not a 20-something male. I’m a bit older and probably looking for something a little tamer. Something my neighbours may judge a little more fairly. That probably says more about me though, than the car. Many loved the way the Type R looks and only you know which camp you are in. 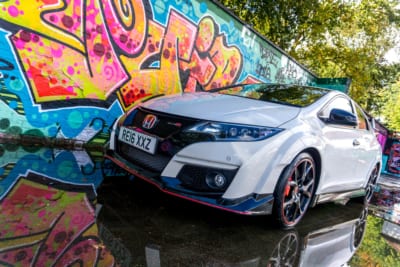 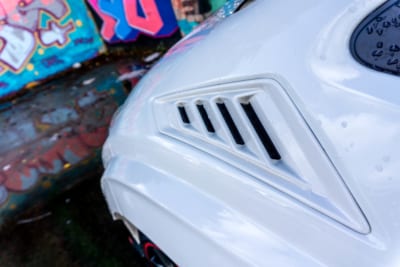 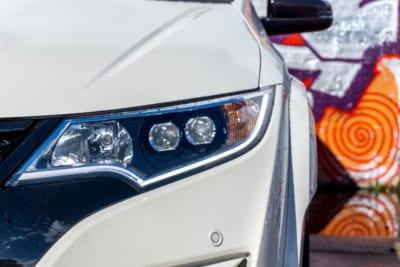 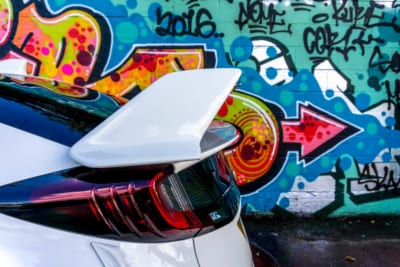 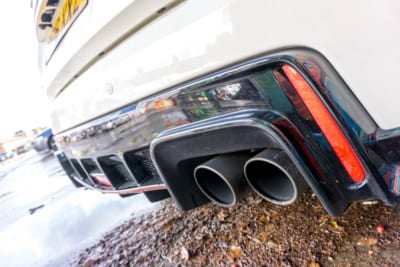 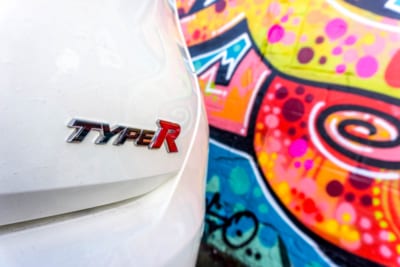 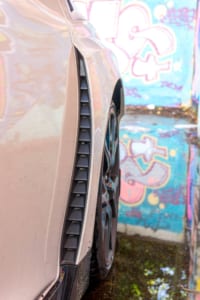 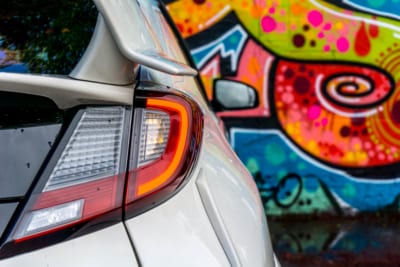 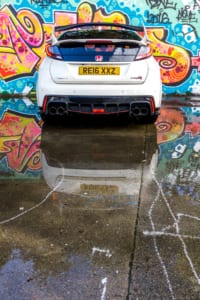 Regrettably the inside of the Civic Type R is probably the most frustrating part of the whole package. Partly thanks to this being a 5-year-old platform and partly due to its rivals steeping up in recent years. Overall it looks like a nice place to be. The design is quite driver focused and it feels unlike most run of the mill hatches. There is lovely red alcantara all over the place and the seats are a great place to perch yourself (even if the bucket-like nature of them makes exiting the car somewhat less dignified). The fake carbon trim is a little cheap looking but doesn’t detract from the overall aesthetic.

The issues I had were a little more fundamental. The first and most annoying being that if I positioned myself so that the seat and wheel were just right for a great driving position, I was unable to see the digital speedo meaning I never know how fast I was going. There was also some frustrating rattles and vibrations when using the stereo at higher volumes. I’m sure this could have fixed easily though. Speaking of the stereo, this is the other area of frustration. Most manufacturers now are getting the hang of providing a decent touch based infotainment experience. The unit in the Civic can at times be awkward to use and feels a bit clunky. It is far from the worst though and operates better than most aftermarket options. Our GT spec test car also came fitted with reversing camera, sensors and the optional Garmin Navigation that is so easy to use. 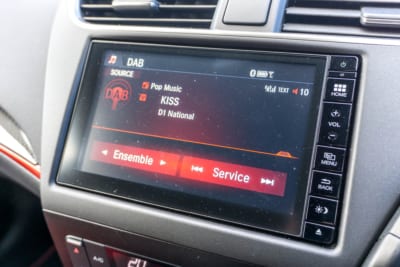 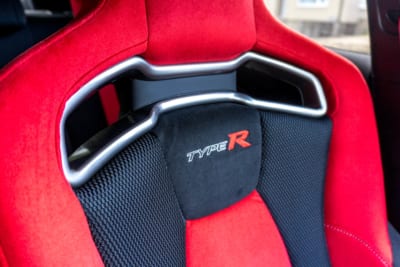 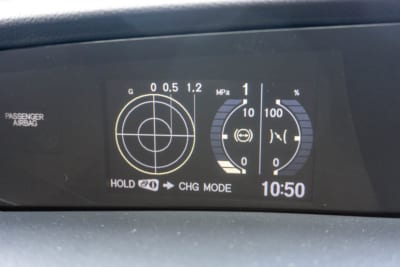 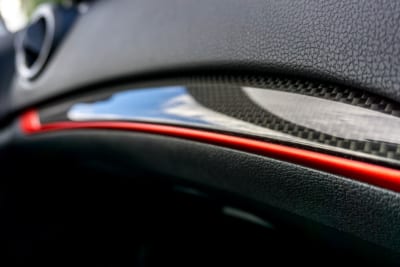 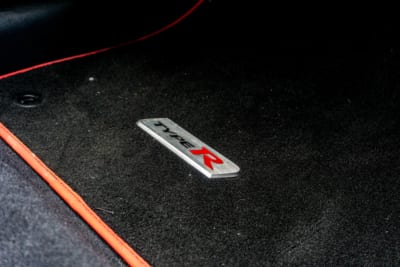 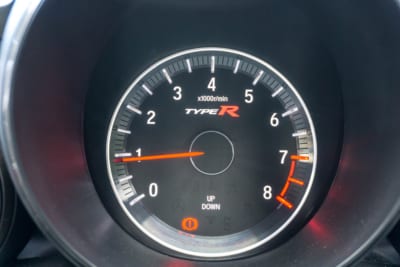 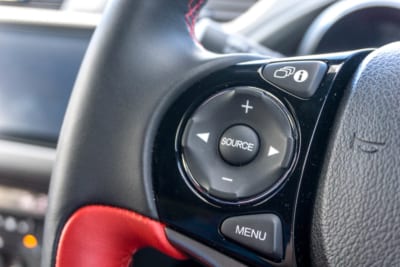 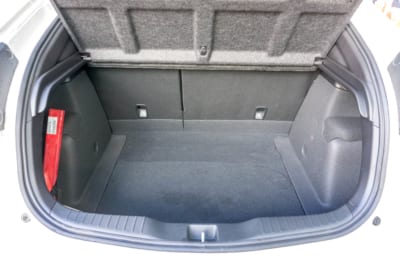 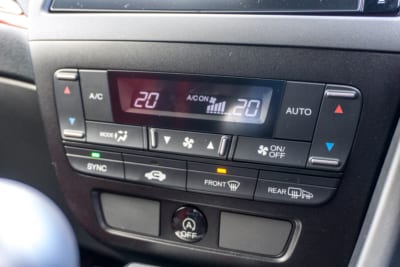 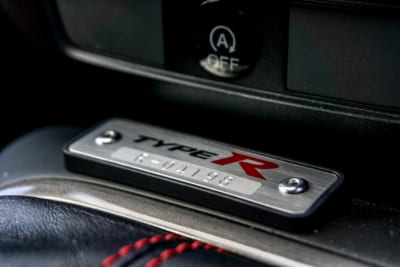 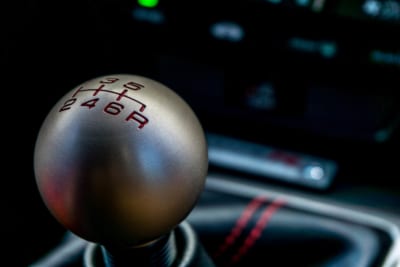 Despite my gripes there are many lovely things to find inside the Civic Type R. The alloy gear knob feels great and is connected to an enjoyable ‘box. To the left of the dials is a small LCD screen that can be set to display a range of info including a G-meter and a turbo boost gauge. Those who find a Golf GTi interior dull will probably really enjoy the Type R. Most importantly though, inside it feels like a Type R should do.

Overall the latest Civic Type R is right at the top of the hot hatch tree. More exciting and more engaging than most, it is definitely the wild child amongst the more civilised offerings from VW and SEAT. Would I have one over my favourite hyper hatch of the moment, the Ford Focus RS? Before this test, probably not but after spending some decent time with it, I’d have to give some serious consideration.