It’s safe to say that the new Range Rover Evoque is rather important car for Land Rover and the British manufacturing industry. It’s forbear was a runaway success and singlehandedly created the small upmarket off-road vehicle niche. It showed the world that you could make money from a luxurious yet compact SUV. So the new model has some seriously big boots to fill.

Whether you like the Evoque or not, this is an important new car. Land Rover knows this and they have spent the last 4-5 years developing its replacement; an all-new replacement (except for the door hinges).

When was the last time you were out and about and you didn’t see a Range Rover Evoque driving by or parked up in the local supermarket? I personally can’t remember a time when I haven’t seen one, even if I’m not looking for one. They are ubiquitous. Not only that,  I’d argue the Evoque has become a modern British icon. 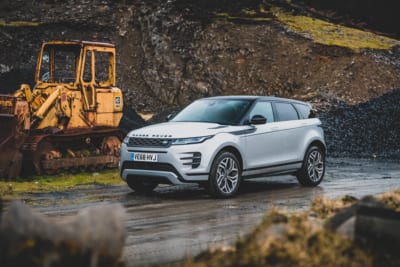 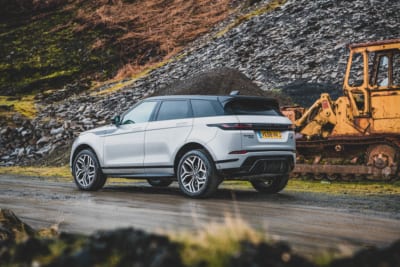 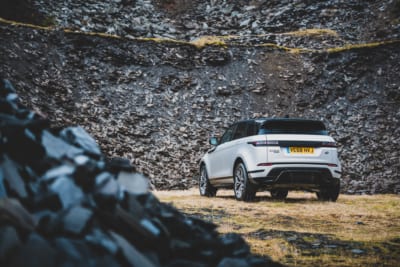 Its design was ground breaking when new and still looks fresh today. It pushed Land Rover towards a more modern and aggressive design language. The Evoque has influenced the entire Land Rover line-up in multiple areas. That is probably why Land Rover has seemingly taken the cautious approach to its successor. From most angles this new car looks largely the same. At least from a reasonable distance. Get up close and you’ll notice that the new Evoque is all about the details.

It’s all in the details

The silhouette of the new Evoque is reassuringly familiar. There is no mistaking what this car is and who makes it. Get up close and you’ll see every little area of the car has been improved and perfected. It takes some new features from the larger Velar but somehow manages to execute them better. The new rear end treatment seems to have better proportions on the baby Range. Staying the at rear, the rear wheels have been pushed back slightly and combined with better internal architecture, the result is a larger boot.

Move around to the side of the car and all of the shut lines seem to have narrowed, giving it an even more premium look and feel. Blip the unlock button on the key fob and the new motorised handles extend from the smooth bodywork allowing you to get in. That smoother new body isn’t just better looking, it’s stiffer and lighter too. Land Rover has employed even more aluminium in the build of this car and has taken several suspension ideas normally reserved for bigger Range Rovers. This is all to improve driving dynamics and refinement. 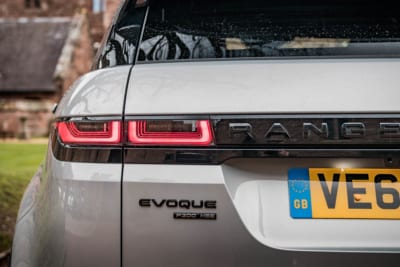 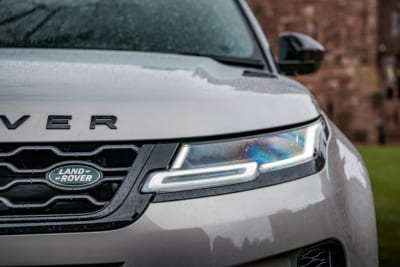 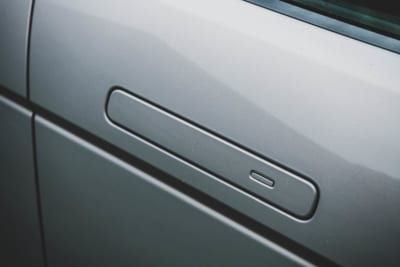 Up front you have the, now familiar, family face. This time it’s distinctly an Evoque. It completes an overhaul that may be more ‘evolution than revolution’ but one that really works. I may view the old Evoque as an icon but I never really loved the way it looked. This new one is handsome from every angle. Not only that but there isn’t a single part of the design that doesn’t feel premium. It’s a design that I feel is finally befitting of the Range Rover badge on the bonnet. 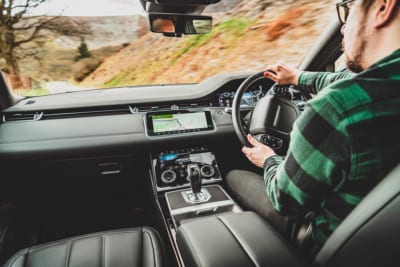 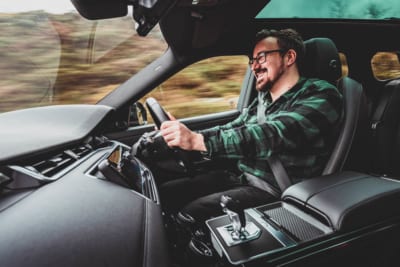 That premium feel continues inside. Again it’s familiar in its layout but every surface and material seems to have been improved. Everything you come into contact with in normal use feels expensive and reassuringly well made. It’s logical too. No faffing around for ages trying to fathom a myriad of switches. Just simple and effective ergonomics. Although why they put the Start/Stop button in a position that is obscured but the steering wheel I’ll never know (this isn’t just a Land Rover thing). Then there’s the tech…

If you’ve sat inside the Range Rover Velar then you’ll be in familiar territory in the Evoque. It has inherited the Velar’s dual central screens as well as a main screen behind the steering wheel. Everything is straightforward and easy to use. Unlike other manufacturers, Land Rover places two decent sized rotating selectors within the lower screen. This means that you can still operate the controls without your eyes leaving the road. Controls that change depending on what screen is displayed. Select ‘Climate’ and you can change the temperature. Select ‘Driving Modes’ and you can vary the Terrain Response. It’s just very simple and a pleasure to use on the move. 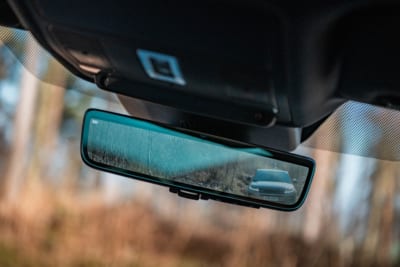 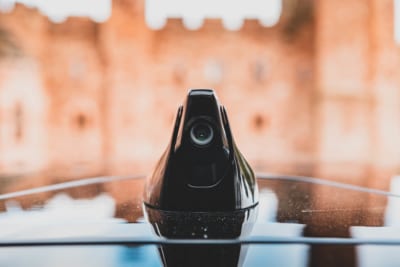 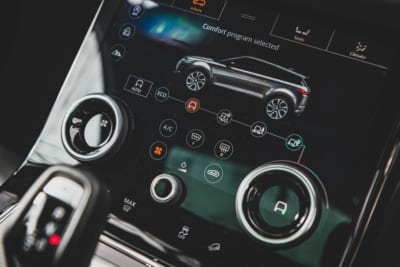 All new cars seem to come with a myriad of cameras these days and the Evoque is not exempt. Land Rover has done some out of the box thinking when it comes to the use of these cameras though. The most obvious and handy new camera is one mounted on the roof in the aerial fin. It’s a high definition wide view camera so you can see behind you. But rather than it appearing on the main screen, you simply flick the switch below the rear view mirror and it suddenly turns into a screen. This not only improves the Evoques slightly awkward rear visibility but it also gives you a good view of your blind spots. It’s very simple in both delivery and operation. It’s very Land Rover.

The other interesting use of cameras is for the ground view, otherwise known as ClearSight. Multiple cameras at the front and under the car are stitched together on screen to allow to essentially see through the car. Whilst this is a technology pioneered to help you go off-road, it is equally useful in tight car parks. My first experience of the technology was in an Evoque with all the windows blanked off. All I had was the ClearSight cameras to guide me. Without any trouble I managed to negotiate the loop outside our hotel. Anyone who’s grown up with a Playstation will find it quite easy to use. We recommend you don’t cover your windows though.

I have to admit, I wasn’t the biggest fan of the old Evoque on the move. It lacked some of the finesse you expect from a Range Rover and it was a little numb to drive. The new car feels a world apart. The new, stiffer body shell seems to have improved the driving dynamics no end. NVH is also much improved. The cabin is nicely isolated from the outside world regardless of speed and the ride is really rather good. It’s still no sports car but pitch it into a bend at speed and the Evoque inspires confidence thanks to good body control and that stiffer shell. 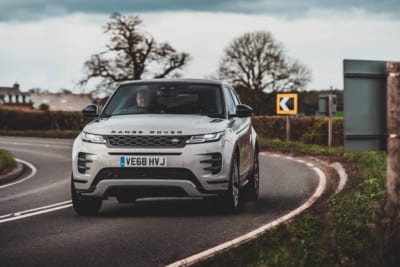 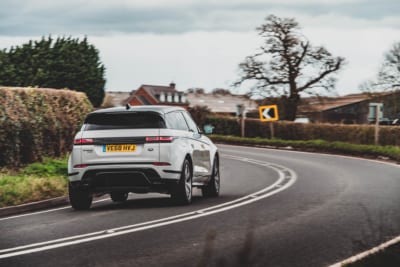 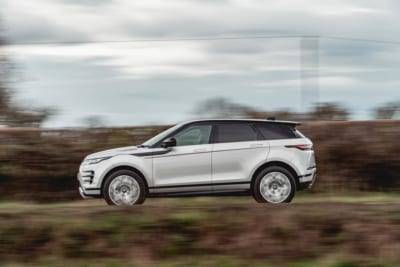 Our car came fitted with the P200 petrol engine. It’s smooth and probably powerful enough for most people but I couldn’t help feeling the diesel would still be a better option. I felt the car needed some more lazy torque to match its character. Also we couldn’t manage to get above 28mpg on a mixture of roads. That’s simply not good enough in 2019. We haven’t driven one yet but I imagine the diesel is far more frugal. A plug-in hybrid will soon join the range and could be the best of bot worlds. We’ll have to wait and see when we drive it.

I wonder how many Evoques ever go off-road? Probably not a huge number but they still wear that green badge on the front. The words Land and Rover mean that it must be more than capable when the roads end and going gets rough. You’ll be pleased to hear that the Evoque is more than entitled to wear that badge. Set in the grounds of our hotel in Cheshire is one of the many Land Rover experience centres. This one utilises an old quarry and is quite the test. I’m no serious off-roader so this was a little outside my comfort-zone but in a good way. 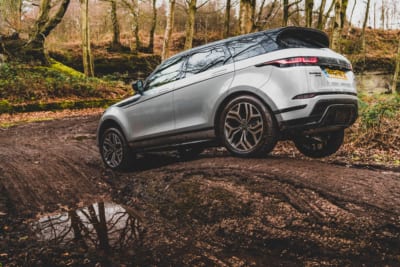 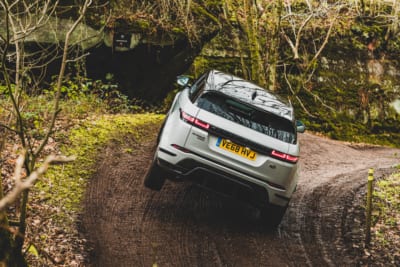 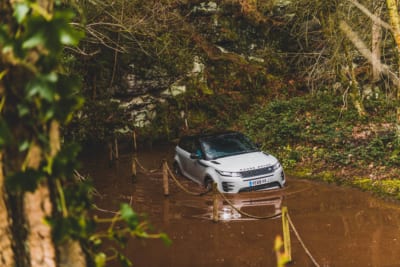 We rolled into the course, selected the most suitable option on the Terrain Response and off we went. The Evoque was happy with everything we threw at it. 45 degree drops, steep inclines, rutted tracks, water, banked sections. You name it and the Evoque seems to just roll up its sleeves and get on with it. Best thing was that as complete novice, all I had to do was try not to go too fast and not chicken out on the steep bits. It might not look like it but I have no doubt that the Evoque is better off-rad than any of its rivals.

The new Range Rover Evoque is sure to be a hit – just like its predecessor. Land Rover has taken the old recipe and added an extra layer of refinement to the baby Range. The new styling is evolutionary rather revolutionary but to my eyes at least, it’s a handsome car. It drives better than before and it’s more capable than before. For me, it finally deserves to have Range Rover written on the bonnet.