On a mild autumnal evening, we sat back in Phonica Records, a vinyl store in Soho, and enjoyed a fine evening of Aberlour’s whiskies matched up with their musical equivalent. The signature range of beverages, ranging from a 12 year double barrel matured whiskey, up to an 18 year matured whiskey, were played alongside a selection of music hand picked by industry experts, to match the specific characteristics and notes of each whiskey. Alongside the rather novel pairing choices for the evening, Aberlour unveiled a beautifully restored and fully functioning Voice-o-Graph for use in the store.

‘A voice-o-graph?’ I hear you say? These individual booths equipped for the recording and pressing of your own vinyls. These booths are about the same size as your average, classic British Phone Box, and, at the height of the popularity back in the 1940s, could be found all over the place, including at the top of the Empire State Building. Launched back in 1910, it probably seemed as revolutionary as the first personal Walkman/CD Player/Minidisk/MP3 player (delete as age appropriate).Drop in a coin, record a message, a poem, a declaration of undying love, a song, or even a selection of songs.  This is due to be in the store until November, so if you get the chance and have something you want to record, we would recommend dropping by Phonica Records.

Phonica Records provided an interesting backdrop to the real reason we stopped by that evening, which was to get sampling their core offering:

Whilst they obviously produce a wider range of limited whiskies, these 4 above represent the heart of Aberlour. Here’s what we thought… 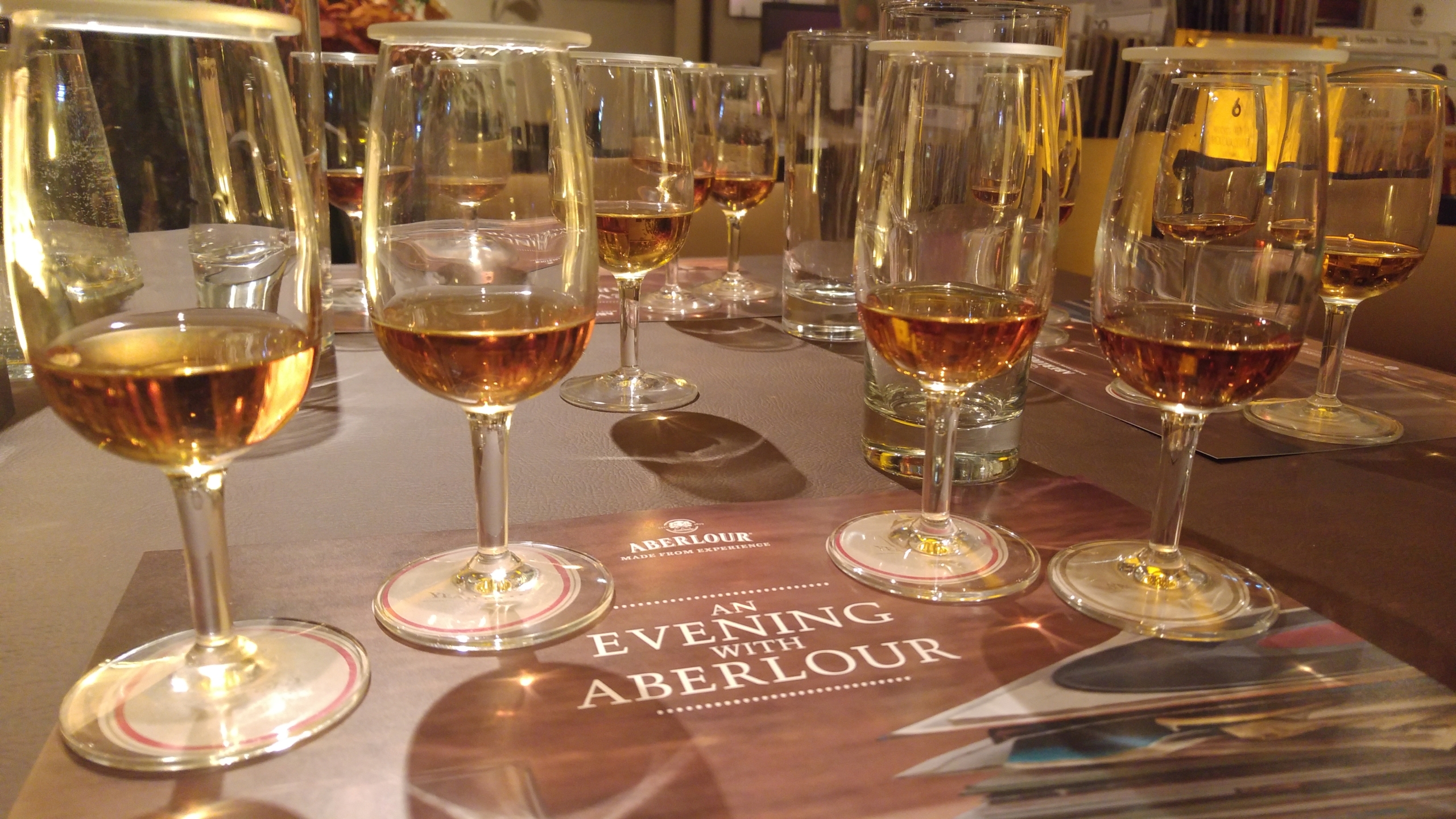 A smooth, soft whiskey. It has a rich, sweet flavour which lingers in the after taste, with hints of cinnamon and ginger. Quite an easy going whiskey, one you may want to enjoy over the Christmas period at leisure as is, no ice, no water, no nothing.

Building on the above, it has a more intense dryness to it and a hint of chestnut on the nose. It tasted slightly more spicy, with the taste of plum and oak perhaps being the most powerful flavours. Its classed as smooth, but we feel to get there, it might want cutting with a drop or two of water.

This is the most complex of the aged offering from Aberlour. The sweetness comes in on the nose, but doesn’t linger much beyond that. It smells great, with that sweetness, but also a slight, fruity bitterness. It tastes marvellously balanced, with a strong taste of the cask it has rested in, oaky and dry. It leaves you with a deeply sweet finish, but its complex enough to not seem so simply sweet as the 12 year old, before finishing with a dry woodiness.

A’bunadh (pronounced  a bit like the curry, its “a boo-nah”)

Where to begin with this one. Its the signature drink of Aberlour, which is powerful in more ways than one. The nose is very strong, with punches of spicy fruit and sherry. It tastes just as strong, with the taste of the sherry cask coming out in front with an oakiness that is backed up by some fruity flavours of orange and cherry, real Christmassy flavours. The finish is described as ‘robust’ and we can’t disagree with that – being quite a strong, powerful, lingering finish of complex spices, a hint of chocolate and a touch of oak. 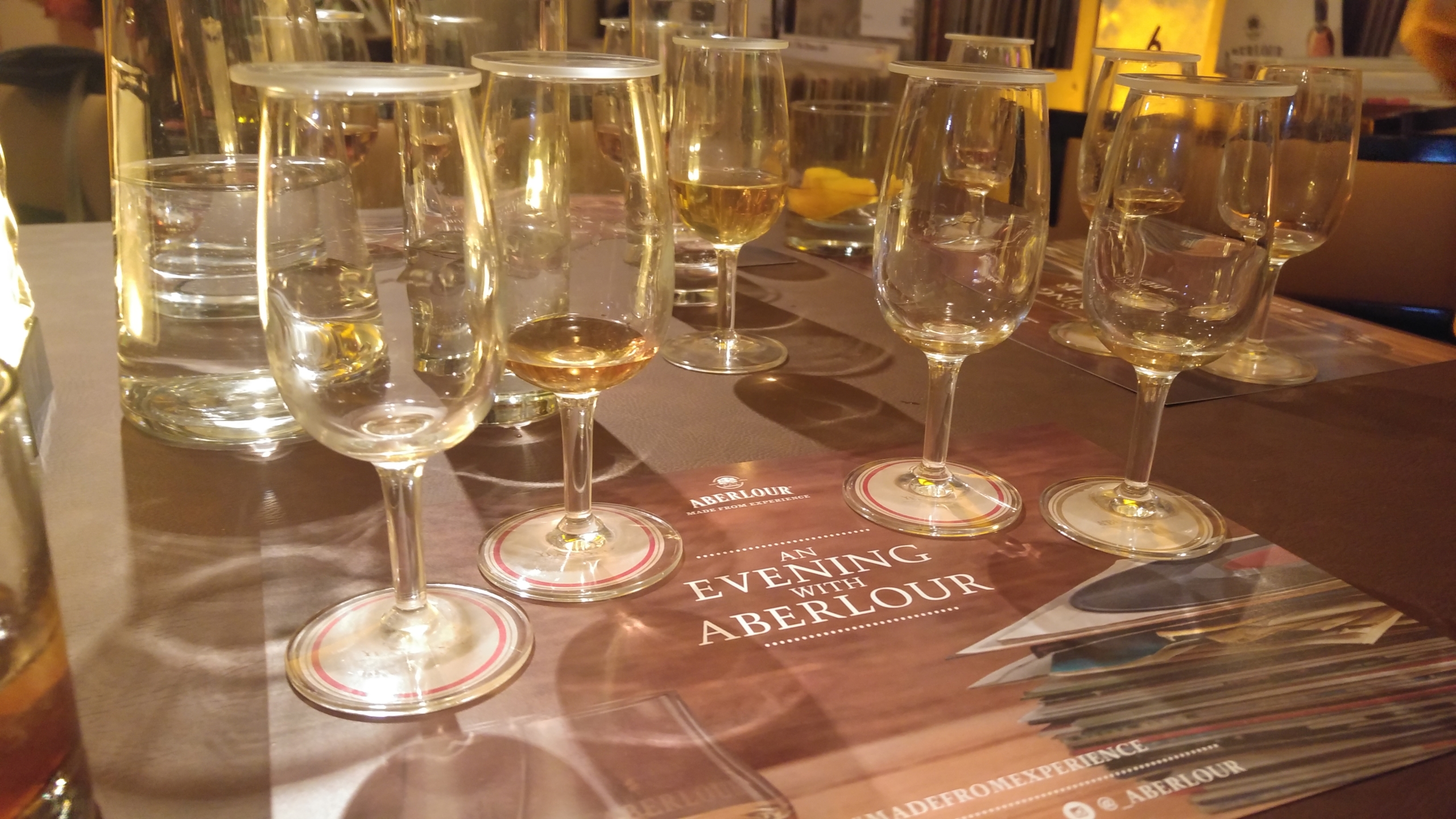 Funnily enough, the balance behind of each of these was paired with music during our tasting, which is all a part of the Aberlour Made from Experience campaign. They’re putting the emphasis of their award winning whiskies back on their roots, their historic Speyside distillery in Scotland, and the experience that they have gained in getting all the right ingredients, the right balances, the right casks and all the wisdom they have gained over time. Reckon one of these whiskies speaks to you? Our personal favourite was the 18 year double cask matured whiskey.