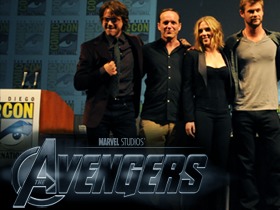 Marvel have cried those immortal words and now the official teaser site is up for the Avengers movie set to be released to the world in 2012.

With all the current cast members coming together at the San Diego Comic Con last month, Robert Downey Jr. (Tony Stark/Iron Man), Clark Gregg (Agent Phil Coulson), Samuel L. Jackson (Nick Fury), Scarlett Johansson (The Black Widow), Chris Hemsworth (Thor), Chris Evans (Captain America) as well as newcomers Mark Ruffalo (Bruce Banner/The Incredible Hulk) and Jeremy Renner (Hawkeye) I for one cannot wait! With Thor and Captain America solo films due for release in May and June 2011 respectively, and Iron man 2 due out on Blu-Ray and DVD this side of Christmas 2010, we will continue to be topped up with super hero goodness for a few years at least!