With summer just around the corner, we’re going to be cooking, eating and, just for you, writing about one of our true loves here at Average Joes HQ; barbecue. This week also just so happens to mark National BBQ Week 2019 (or #NatBBQ2019 as the kids are calling it), so to celebrate here’s a run-down of the best barbecues we’ve had the pleasure of demolishing in London!

With the sheer amount of BBQ joints in London, it can be hard to know where to head first. But we think the best barbeque sandwich at least in the capital is the Brisket Bun from SMOKESTAK. What started as a street food stall, SMOKESTAK opened their first restaurant in Shoreditch a few years ago and we keep heading back. Sitting in between a butter-brushed bun, their Brisket Bun is the signature with multiple cuts of their very own slowly smoked, melt-in-your-mouth brisket topped with pickled red chillies for a kick. It’s simple but it’s also probably the best brisket you can sample in London. 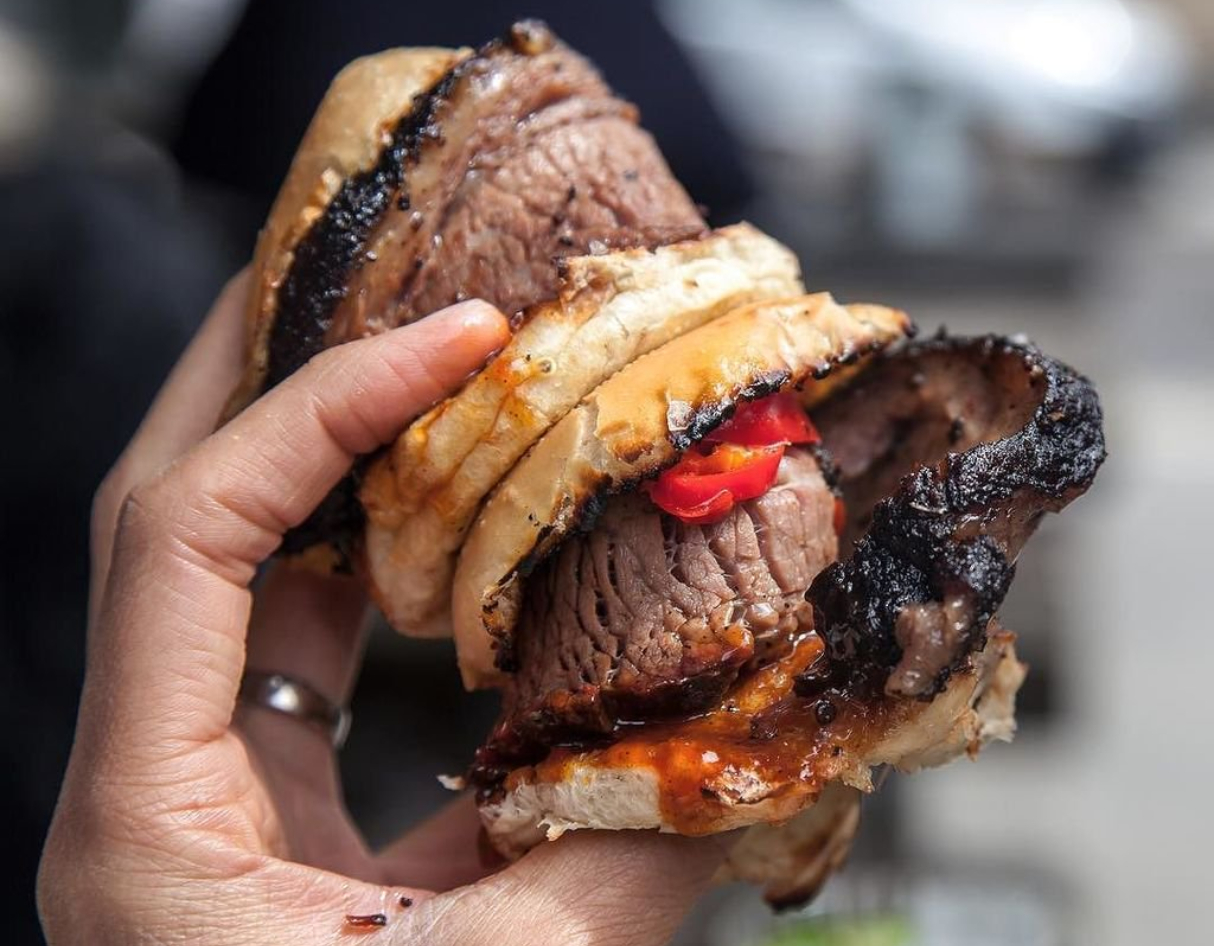 Another food truck-turned eatery, Pitt Cue recently swapped the hustle of its small Soho restaurant for the more comfortable surroundings in The City, where they are continuing to serve up some truly sensational cuts from a daily changing menu. All parts of the animal are used here, so expect the likes of Cured Pig’s Jowl with Apple Ketchup and Smoked Beef Neck with Shiitake. Bone Marrow Mash is also a must at Pitt Cue. We should also point out they take their booze seriously here too. So much so, they’re about to open Alphabeta, an in house brewery which will include a selection of Best Bitters, Pale Ales, IPAs, Smoked Porters, Rye Beers and Bourbon Brown Ales. 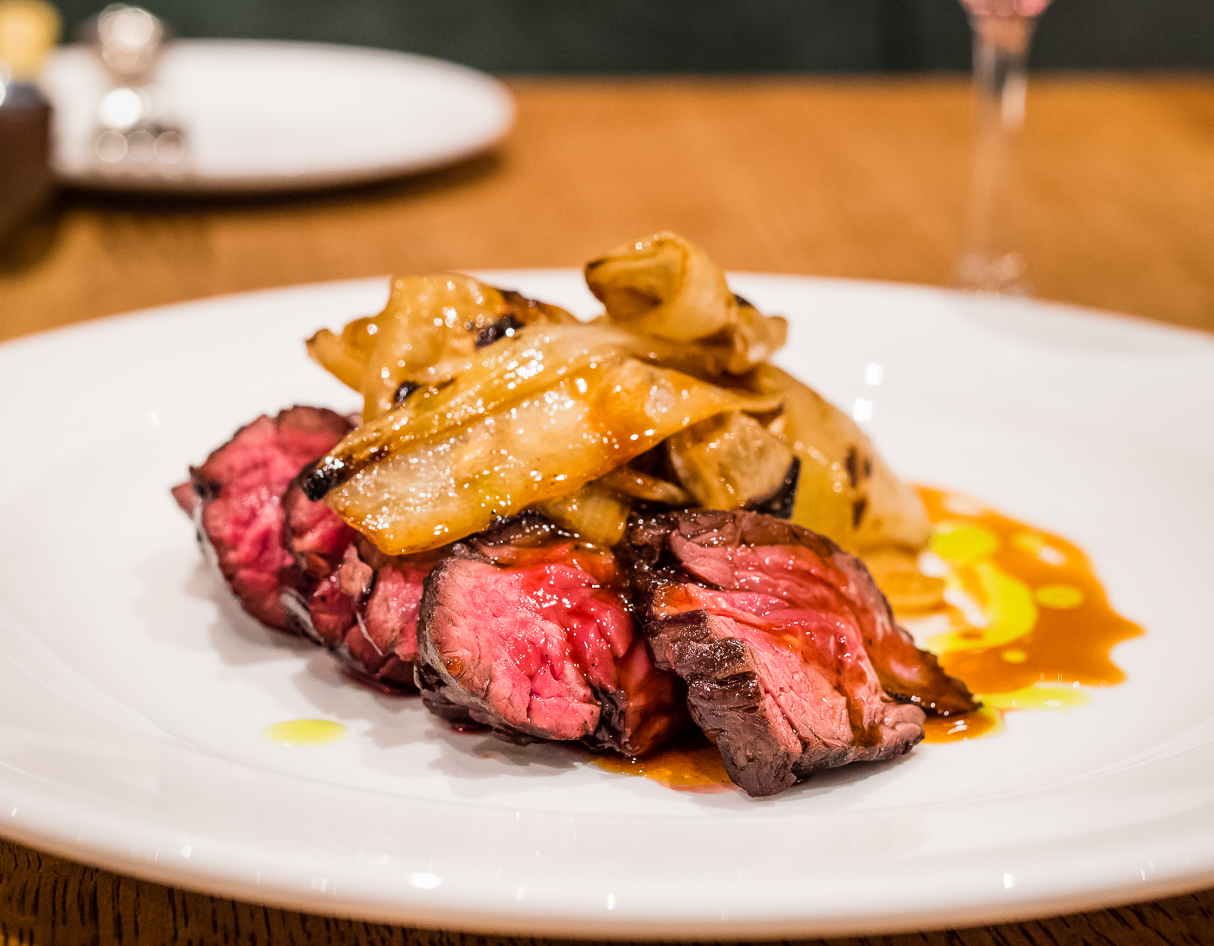 When it comes to barbecue in London, we couldn’t have a list without the restaurant that arguably started it all. Bodean’s was founded by Andre Blais, an American who wanted to bring his hometown Kansas City’s barbecue to the UK. It’s now sixteen years ago Bodean’s opened and it’s still one of the most authentic BBQ joints in the capital. Much of this is down to their in-house oak-burning smoke pit and distinct dry rubs and sauces. Whiskey also plays a big role here so be sure to get one of their Old Fashioneds! 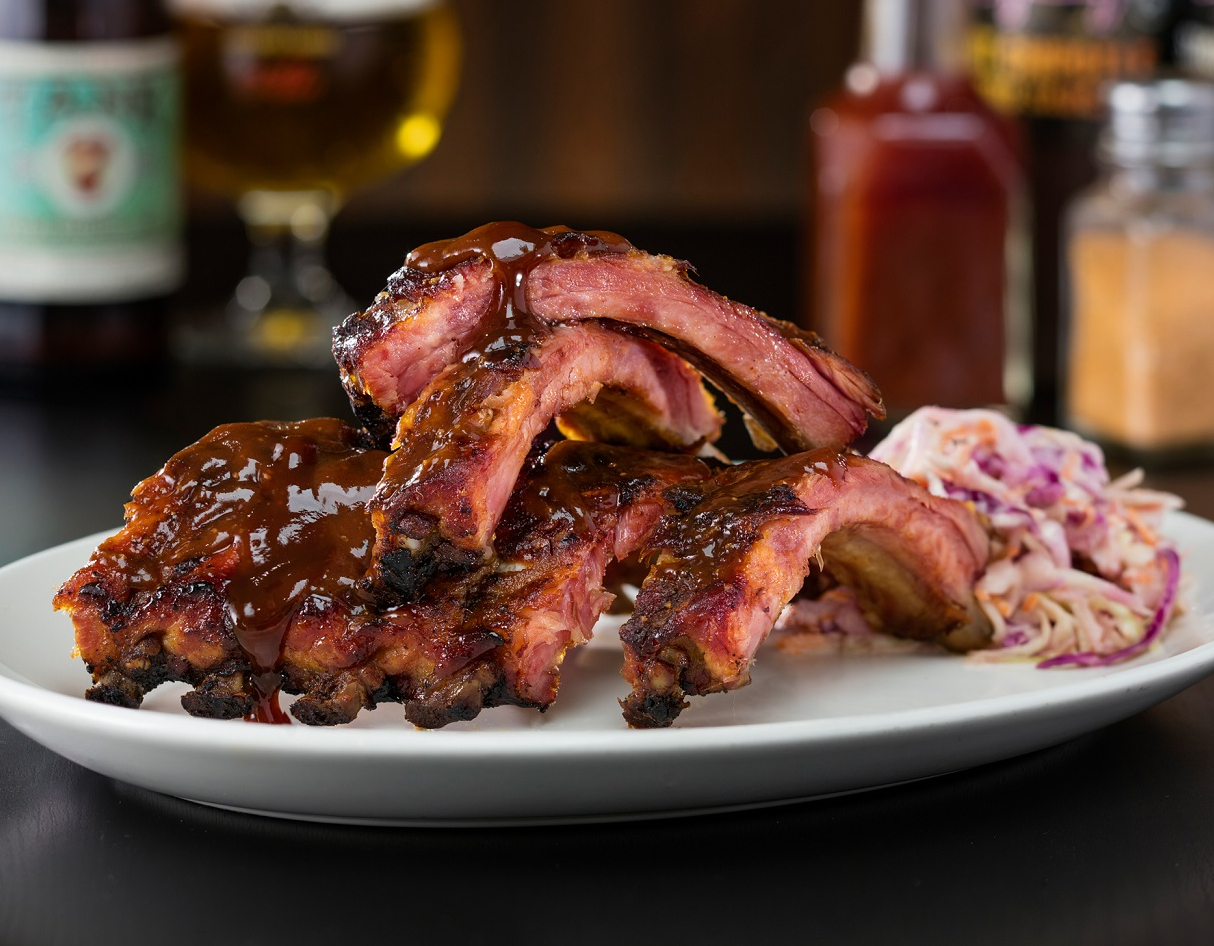 Another relatively new kid on the block having secured backing from one of the Dragons from the Den, Texas Joe’s Slow Smoked Meats is gaining a reputation and quickly. Famed for their jerky, which can be bought in supermarkets, the restaurant isn’t Texas ‘style’ or Texas ‘flavoured’, it’s the real deal. It’s a proper rustic Texan hangout and comes complete with a jukebox and plenty Southern hospitality. Slow Smoked Meats does BBQ the Texan way with USDA beef brisket, beef prime rib and pork shoulder all on the menu, as well as mutton shoulder and ribs. Their wings are also well worth the visit! 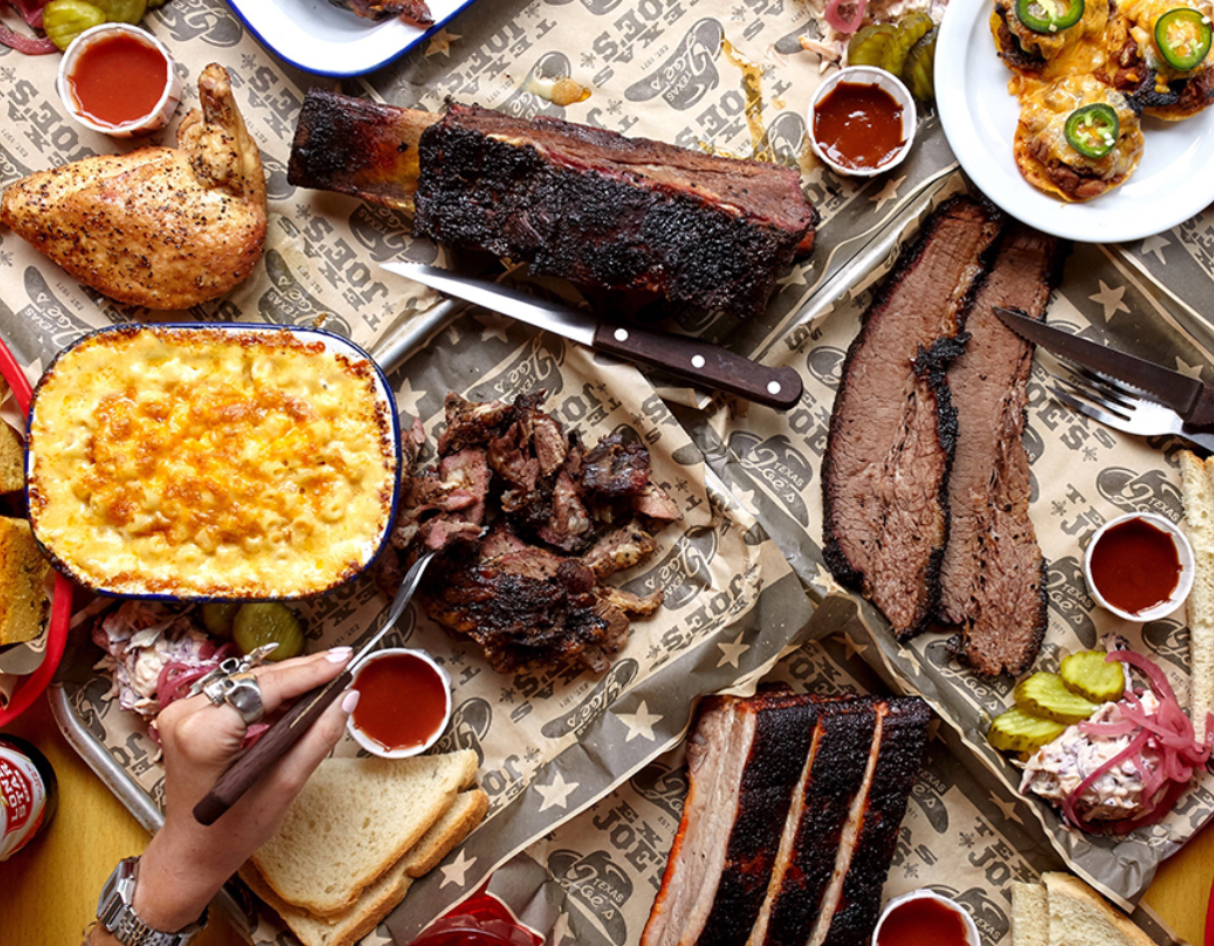 When it comes to London BBQ, Neil Rankin has long been your go-to man. Formerly of Pitt Cue as it happens, the renowned chef runs the kitchens at Smokehouse in Islington and Chiswick. We recommend Islington, purely because of its location, where they serve signatures such as Slow Cooked Chipotle Pork Ribs with Cucumber Salsa and Fries, as well as one of the most succulent Smoked Lamb Shoulders we’ve ever had for Sunday lunch. The interesting thing about Smokehouse is it doesn’t nail its masts to one region. As such, you’ll find Argentinian, English and even Korean influences on the menu. 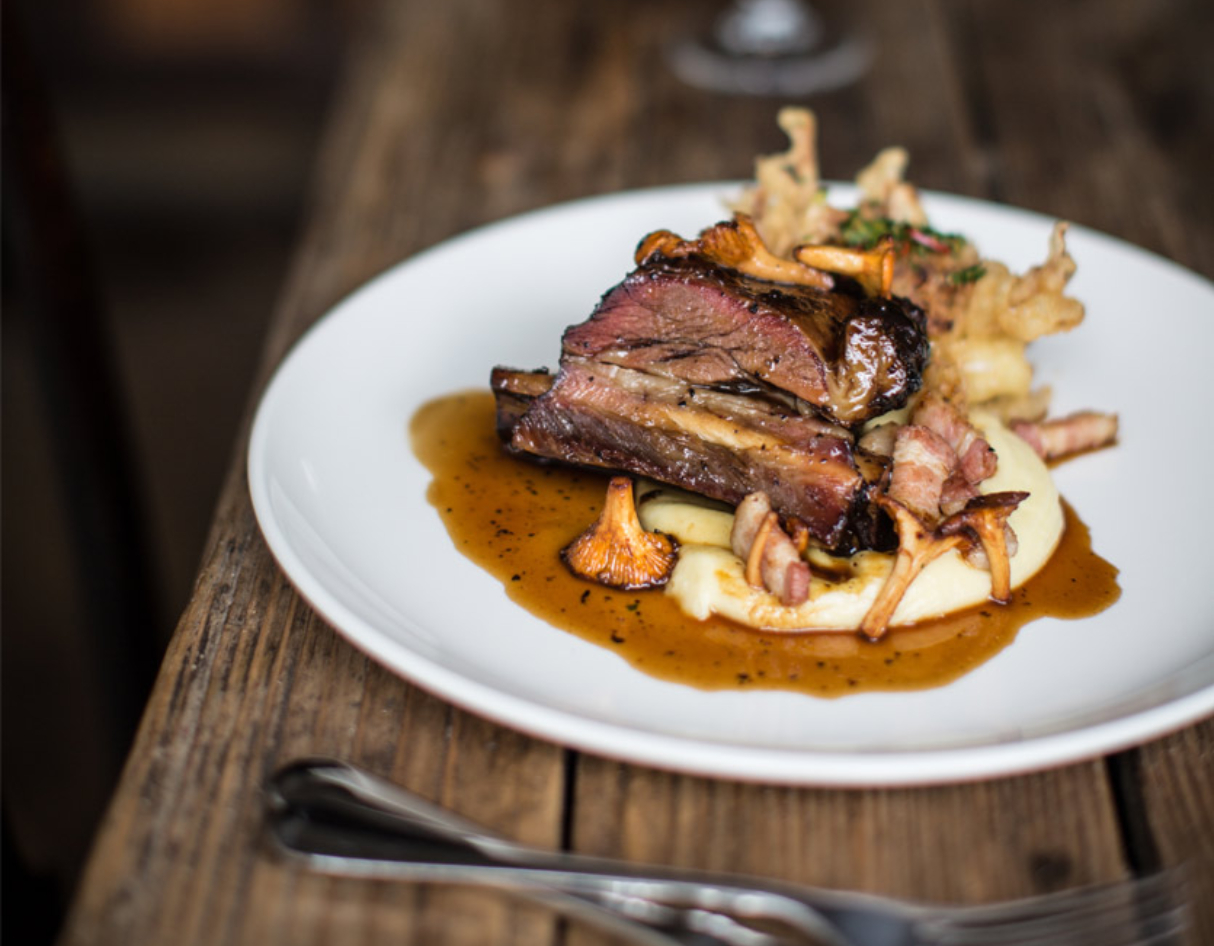 Brixton Village Market is arguable the best foodie hangout in London, so naturally there’s a stellar BBQ joint here too. And rather aptly, it’s called The Joint. Don’t expect fine-dining, just a messy sauce everywhere. Burgers and buns feature heavily here thanks to The Joint having their own bakery, but you can also get a side of ribs or mac n’ cheese. Our tip would be The BBQ which features Candied Apple Bacon, Slaw & Salad in Homemade Bun or Wrap, or The BJ Burger which comes with a Double Beef Patty, Pork Belly, American Cheese, Secret Sauce & Pickles in a Potato Bun. They also do like to raclette their creations too, just for good luck! 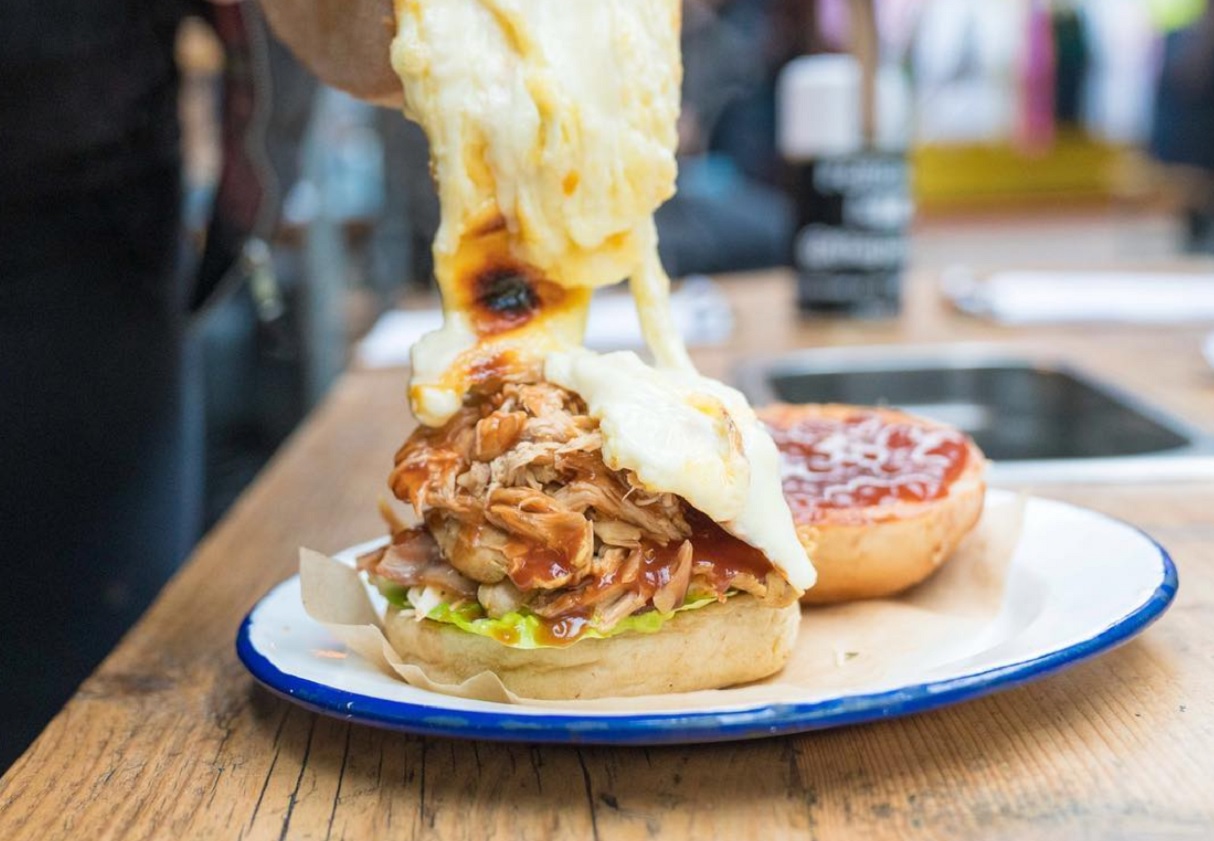 If Kansas is just a bit too far north for you, head to Camden and The Blues Kitchen for, in our opinion, the best Texas-style barbecue joint in London. Ribs are cooked for 16 hours and brisket for 20 hours at Blues, but that doesn’t mean you’ll be served dry meat – anything but. We’d recommend everything here but have always loved their Crispy Fried Chicken which has been lovingly marinated in buttermilk. While The Blues Kitchen is always going to be about the food, it doesn’t half pack an atmosphere too with DJs and live blues music every night. Also, make sure you don’t leave until you’ve tried the deep-fried Oreo with chocolate sauce. Every bit as ridiculous as it sounds but also every bit as good! 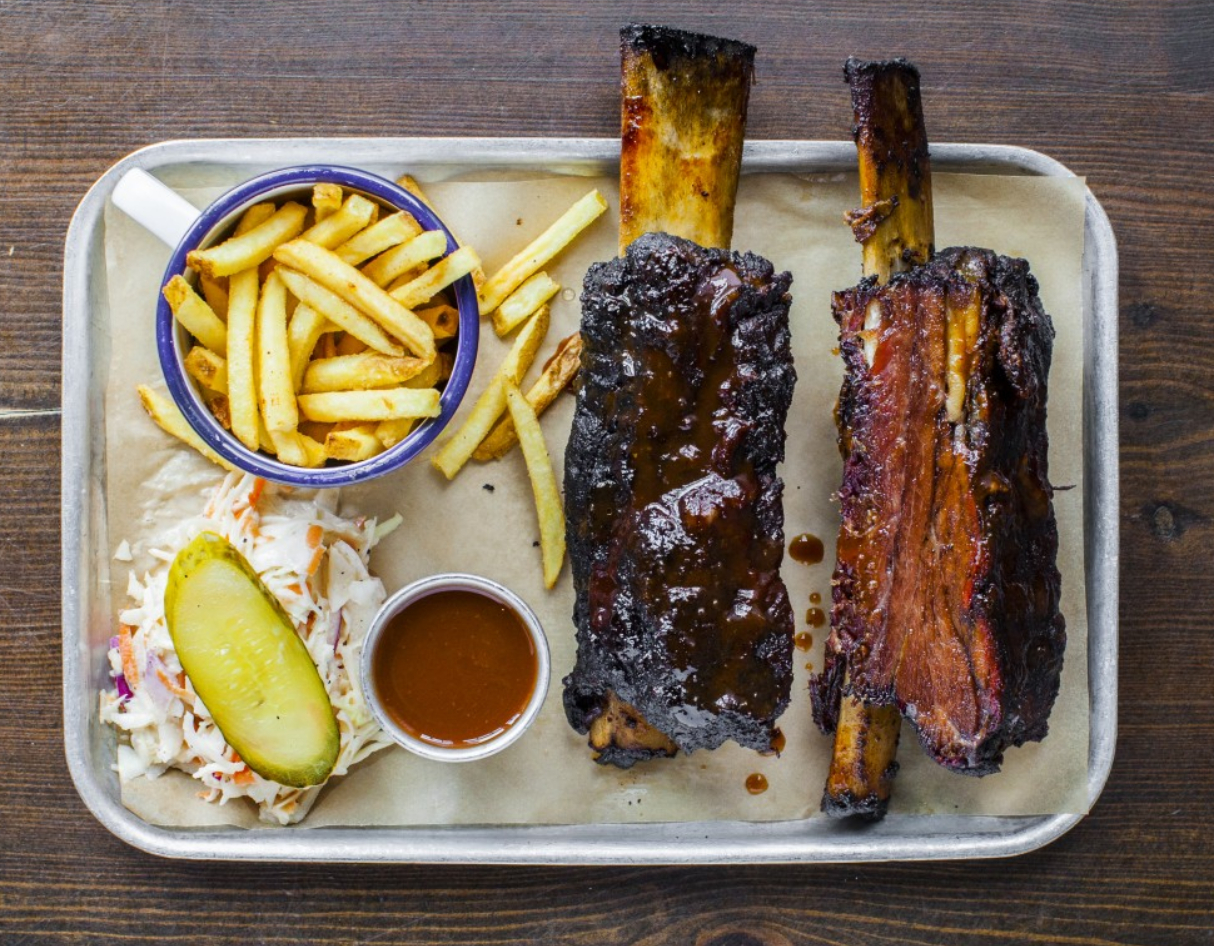 If you’re after a quick lunchtime morsel, here’s what we think are the best sandwiches London has to offer!