London has long been known as one of if not the most cosmopolitan city in the entire world. So with today being German Unity Day, Germany’s national day commemorating the anniversary of reunification in 1990, we thought we’d take a look at German culture in our capital.

With an estimated 55,000 German residents in London, it’s no great shock that the capital boasts some of the best drinking and eating haunts this side of Bavaria. So without haste, here are some of the best German bars, restaurants, and bakeries to visit in London.

It may be a little too far out of central London for our liking, but nobody can deny that Fulham-based Octoberfest Pub is one of the best, if not the best German pub in the capital. Offering a taste of the most famous Bavarian beer festival all year round, Octoberfest is the perfect haunt if you’re looking for live football during the day and live oompah bands in the evening. As well as featuring traditional Bavarian costuming and some authentic German grub – we’re talking currywurst and brezel – it’s also home to the largest selection of German beers in the UK, featuring over 60 different beers. What more could you possibly want? 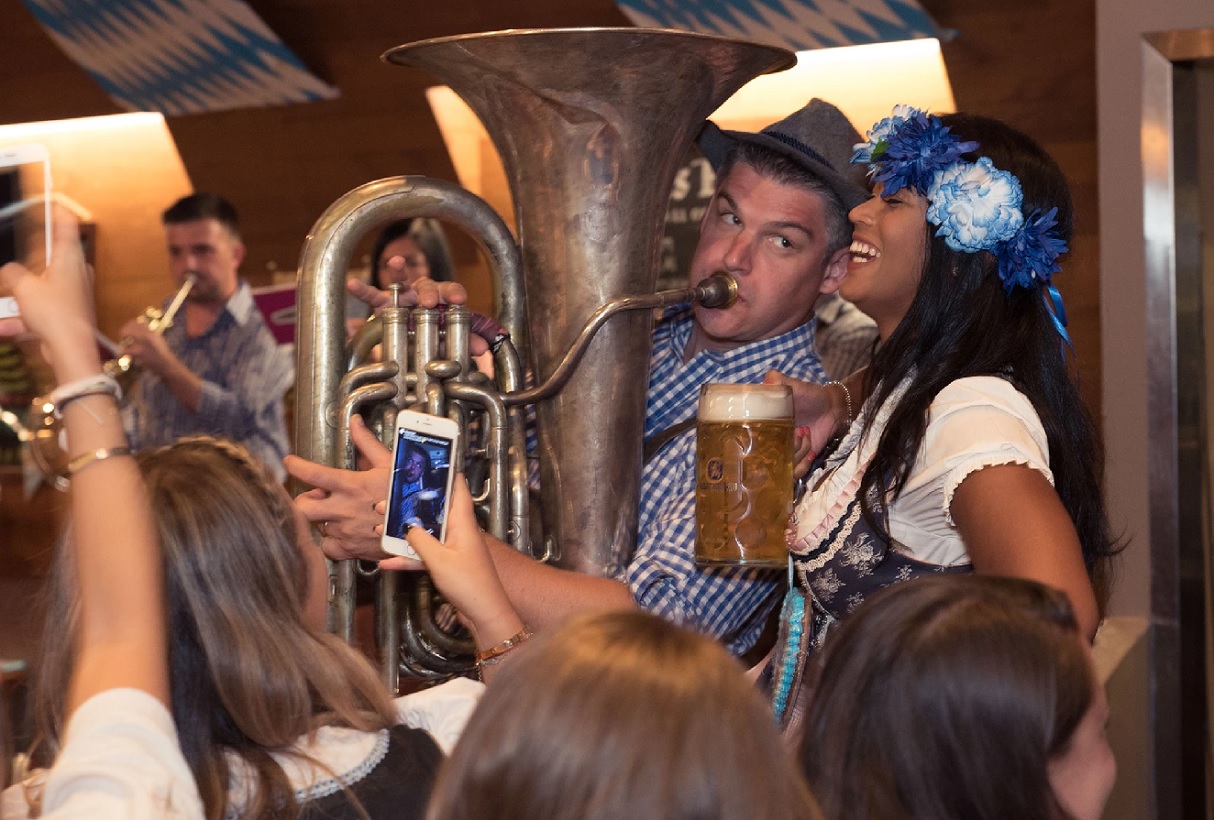 Its name means ‘hangover’ in German, so you know it’s good. Located next to the bustling Borough Market, Katzenjammers is ideal whether you’re dining in the upstairs Bierkeller (with its extensive Bavarian menu) or partying downstairs in the Bierhall (with its awesome new sausage bar). Naturally, all the Bavarian sausages are accompanied by a typical selection of German beers with live music every Friday and Saturday. 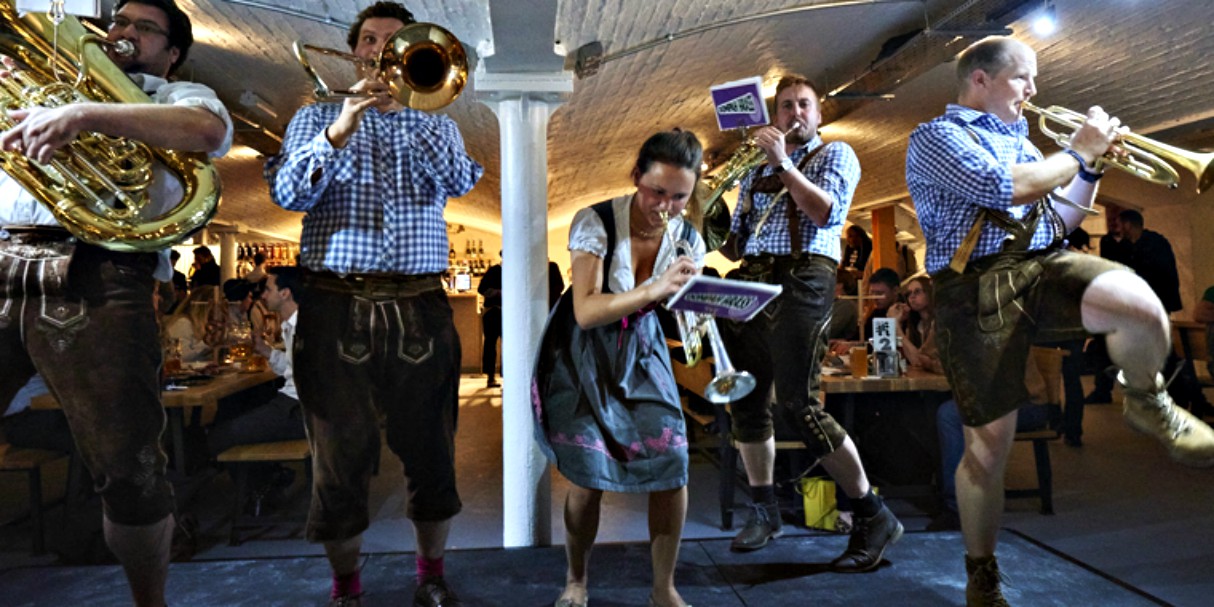 Zeitgeist has long been a firm favourite among south London’s ever-growing German community thanks to its great German beer, food and live Bundesliga games. Located at the former Jolly Gardeners, a historical pub which served for 120 years with the likes of Charlie Chaplin as one of its patrons, Zeitgeist is London’s first German gastropub offering 18 German beers on tap and more than 30 bottled beers, as well as several German Schnapps. The menu is also authentic with a selection of specialties from all over Germany like schnitzel, schweinebraten and currywurst. If you’re a Londoner, chances are you’ve headed into Bierschenke at one point or another. Situated near the City and not too a million miles from Shoreditch, Bierschenke on Essex Street offers a whole lot more than just a stein of your favourite lager. The food here is some of the best German grub we’ve had in London with a selection of sausages, schnitzels and Bavarian specialties perfect for soaking up the pilsner. If you head there on a Saturday, you’ll also get the chance to hear some live brass bands. It may be too far to get to for most, but ask any Joe in the south-west London area and they’ll tell you just how much Stein’s in Kingston-on-Thames is worth the trip. Dubbed ‘The Bavarian Experience’, Stein’s comes with a relaxed bar which serves all your German classics including schnapps, a giant biergarten overlooking the Thames, and a way above average restaurant serving some of the best sausages you’ll find outside Munich. Steins is so authentically German, they even hired German-Polish company Adamski Construction to design and build the rustic traditional interiors. 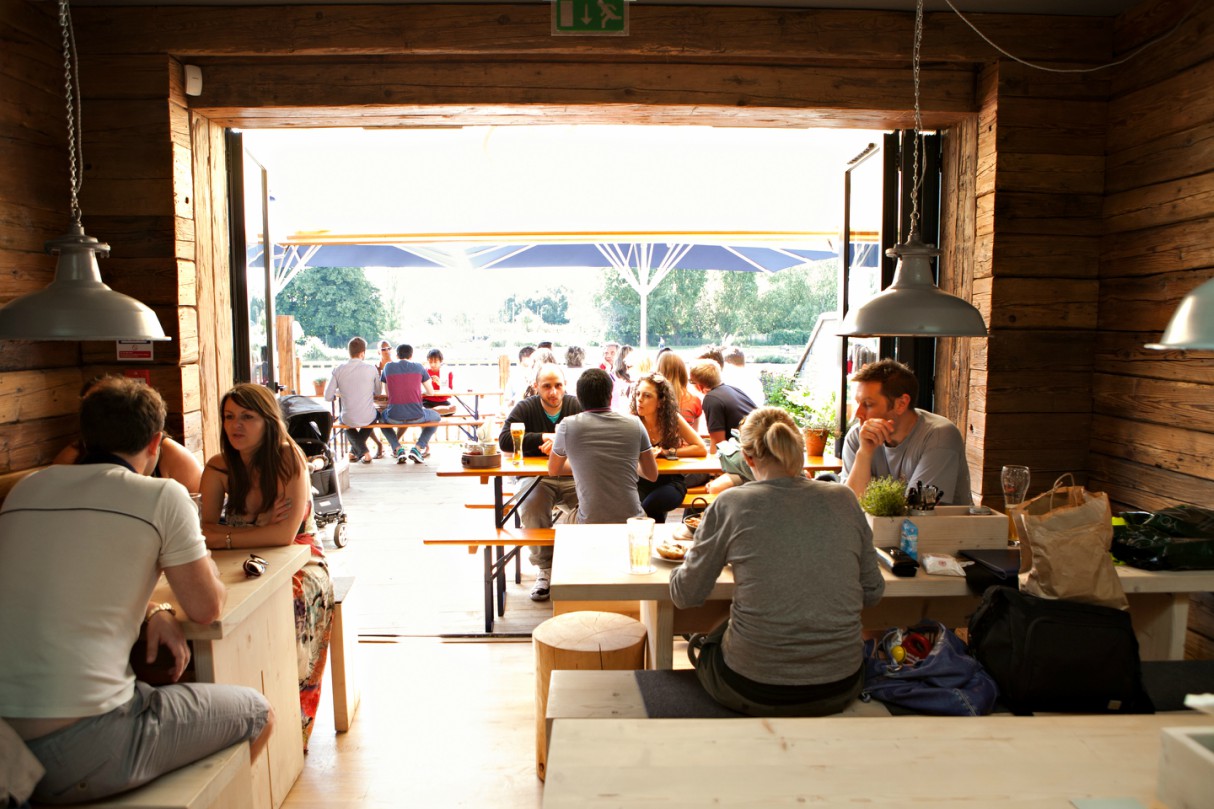 While it might not be a restaurant as such, Herman Ze German should be your go-to deli/fast food joint if you’re in dire need of a wurst. The establishment is a London institution having been ran for years by a couple from the Black Forest who import some seriously wunderbar sausages from their old butcher back in the motherland named Fritz. Seriously. Herman is also one of the best places in capital if you’re after a decent brezel. Though their bier may get all the plaudits, it shouldn’t be forgotten just how well those Germans bake. As such, there are a plethora of bakeries in London serving specialist cakes, breads and pastries as good as anything you’ll find in Berlin. And the one with the best reputation is Ronny’s German Delicatessen (and their roaming Backhaus Bakery Van) in Richmond. Ronny’s is special for one reason; their bakes are made strictly in accordance with traditional methods and original recipes, and are created onsite daily using only untreated German flours from the Hemelter Mühle in Rheine. As well as serving German staples, their cheesecakes are also to die for. For something slightly closer to central, Hammersmith’s Bäkehaus is also another gem, selling German classics such as Berliner doughnuts, vanilla cream turnovers the size of your head, soft pretzels, and cheese and spinach borëk. Naturally there’s a whole host of freshly baked German breads on offer too. Bäkehaus is also perfect for lunch with an extensive range of German snacks like schnitzel, fleischkäse and bratwurst, as well as sandwiches and pizza slices.