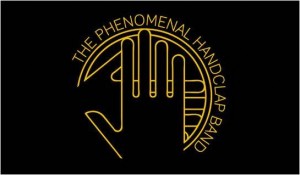 Apologies for the slackness with my reviews over the last few weeks… Fret not, I return to you this week a better man. With review in hand, you should have more than just a day to download it this time.

If you’re a lover of the musically diverse or fall into that narrow group of half wits who savour the psychedelic and long for a ’70s revival; this week’s single from ‘The Phenomenal Handclap Band’ should be right up your alley.
The brainchild of producer/performers Sean Marquand and Daniel Collás, I’m not sure how you’d quite describe their sound… it’s a blend of early 70s progressive soul and anthemic disco dance; with a hints of rock, pop an electro to boot, it spans the musical spectrum. Either way, with such orchestral break beats and synth-heavy productions, it’s incredibly melodic and dance-floor happy. This 8 piece collective’s diversity is evident in not just their music but ultimately in their composition too. With members from TV on the Radio, Mooney Suzuki, Calla, John Spencer Blues Explosion, they would best be described as a mish mash/who’s who of New York’s underground indie and soul scenes. On paper they’re everything you could want and more!!
‘You’ll Disappear’ is the follow up to debut single ’15 to 20′. Although, it may lack ’15 to 20’s’ infectious playground-style vocals don’t let this dissuade you. It strikes a chord of its own and I actually think it’s a much better track. Full of electronic synthed swirls and soulful vocal harmonies it’s a nice laid back piece of kitsch disco funk. Much like the rest of their album, you’ll be hard pushed to find two songs that sound the same. Their album could easily be mistaken for a 70s retrospective compilation CD rather than being an album from one band. This is where the bands falls short unfortunately. Despite their multi-faceted nature being undoubtedly refreshing an innovative, it’s almost too eclectic. Eclectic to the point it’s almost fickle. I mean this in the sense you are never sure what they are trying to achieve. This in turn makes it difficult to make that all important connection with them and their music.

They have a potential to be a massive band and I know I said it was music for psychedelic half wits but in fact it’s actually more than just that. I could imagine it being quite appealing to even the harshest of musical palettes; I just think they need to focus their sound a little bit. PHB are definitely worth a listen and even if this track does not appeal to you, one of the songs on their self titled album ‘The Phenomenal Handclap Band’ is sure to. ‘You’ll Disappear’ should be on iTunes til Tuesday.

It’s a mixed review this week; I like them in theory just undecided in practice. 7/10