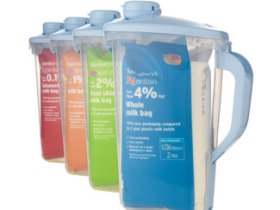 Supermarket Sainsbury’s is rolling out new eco-friendly milk bags and jugs across its entire product range in a bid to reduce the carbon footprint of Milk consumption in the UK.

The partnership with Dairy Crest, means that from today, Sainbury’s will stock whole and semi-skimmed milk ‘bags’ in all of it’s stores. During a trial of semi-skimmed milk bags, stores shipped over 120,000 per week and it is hoped that will now double as it pushes more of it’s product range.

On average the new bags contain 75% less plastic than bottles, as well as being 6p cheaper, more energy efficient during production and smaller during disposal.

A similar trial was held rival supermarket Waitrose, which launched in 2007 but failed and was removed. However Tesco are following suit and trialling similar bags in 10 stores from today.