Scott Pilgrim vs The World 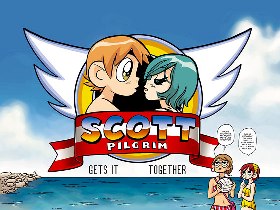 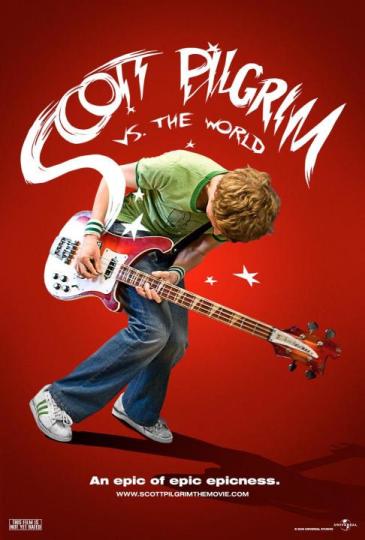 WE ARE SEX BOB-OMB!

Cult film of the year? I think so!

Directed by Edgar Wright, one of the masterminds behind Shaun of the Dead & Hot Fuzz, brings the comic books of Bryan Lee O’Malley to the big screen.

Opening with an 8-bit graphic & music version of the universal logo and theme tune, this film has more pop culture references than you can take in its 112 minute running time, most of them appealing to 20-30 somethings who got involved with the 90s computer game culture, some may be spoiled on those who did not!

The film depicts a 23 year old guy called Scott Pilgrim (Played by Superbad’s Michael Cera), a general slacker with no job, who prefers to spend time at the amusements and play Bass in his band Sex Bob-omb (Yes a rather easy pop culture reference – answers on a postcard as to where from?).  Scott falls in love with the girl of his dreams, but to date her, he has to defeat her seven evil ex’s.

The film is rather slow paced to start off with but once you start cracking into the evil ex’s the action picks up with classic beat-em-up fight scenes you were used to playing in street fighter or mortal kombat on your Mega Drive (With a faint ‘VS’ sign appearing in between each character before each fight brought back memories).  Not all of the ex’s don’t get much screen time however the ones that do nearly steal the show from Cera, with Brandon Routh and Chris Evans playing 2 of these but are easily despatched by Mr Pilgrim with cunning (How often can you say you beat down Superman and Captain America?!).

Wright’s ability to make the film feel like it is pulled straight off of Bryan Lee O’Malley’s graphic Novels, with the comic style ringing text coming out of a telephone, to linking straight to storyboards from the comics.

Basically a coming of age story told in a really f****d up way (I think the story is all in Scotts head) and I doubt it will do well in the box office due to its low fan base.  But will be a massive hit on DVD, and definitely worth a watch.