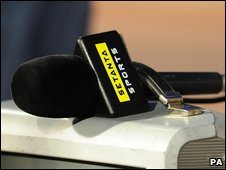 Reports are coming out this morning that new sports broadcaster on the block Setanta is on the brink of collapse. The firm which was famous for bringing Des Lynam back to television in it’s adverts pronouncing the name wrong has been dogged with problems since it’s release. Many of the Premier League games they shown have been dubbed second rate, along with masses of customer satisfaction problems and many interruptions in broadcast.

Many argue the writing was on the wall recently when they defaulted on a £3 million payment to the Scottish Premier League. And unless they can find funds to help pay the current £30 million they owe the English Premier League they could be in administration by the end of the week.

Setanta, which also shows cricket, golf and rugby union, has about 1.2 million subscribers, but is losing up to £100m a year, analysts say. The rights to show the English Premier League – and the subscribers that this pulls in – lie at the heart of Setanta’s business model. But the firm had only about 60% of the subscribers it needed to break even, said Professor Chris Brady of the BPP Business School.

What went wrong for Setanta?
As a Sky Sports customer I was tempted to head over to Setanta, but even the promise of double the football and all of the American PGA Tour, the principle of having to pay extra money a month just to watch more sport put me off. And now they have lost even more games, I am guessing even more people will leave.

Another, once feather in the cap was many live UFC main events, however, firstly the failed to advertise these is a productive way which means the masses never knew they were on, and second many fights stopped broadcasting live before the main events at 1am which was a blow in the teeth for fans, literally!!

It is expected that a rival broadcaster – perhaps ESPN – would buy up its Premier League football rights.

A shared deal with ITV saw them secure rights for England and FA Cup matches for £425m – and it is likely another firm would buy up these rights.