While we don’t actually know when we’ll be seeing it, we’ve finally got a trailer for the long awaited Sherlock TV Special, which sees Benedict Cumberbatch and Martin Freeman back as Holmes and Watson. Only not as we know them…

The BBC critical and audience smash hit is going all Victorian on our asses as the new special leaves 21st Century London for an Arthur Conan Doyle-appropriate Victorian setting.

As such the Sherlock Special will be a stand-alone from the main show. Although if we know Sherlock like we think we do, we’re sure there’ll be plenty of smirk-raising nods to the first three series.

Plot-wise, you know the score. The one-off episode see our heroes investigating a seemingly impossible case. Other regulars are still around with Rupert Graves, Louise Brealey, Jonathan Aris, Amanda Abbington and Una Stubbs all on Victorian duty as well as our two stars. 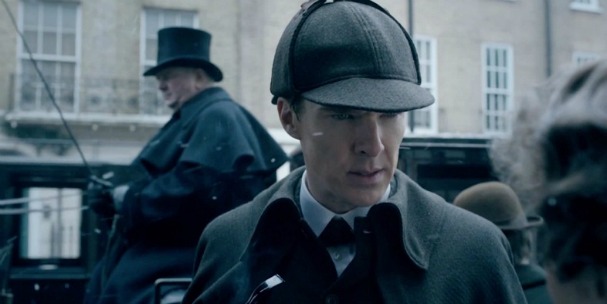 Back in March, showrunner Steven Moffat was quoted by EW as saying, “We wouldn’t have done the story we’re doing, and the way we’re doing it, if we didn’t have this special. It’s not part of the run of three episodes. So we had this to do it – as we could hardly conceal – it’s Victorian. Mark Gatiss and me, we wanted to do this, but it had to be a special, it had to be separate entity on its own. It’s kind of in its own little bubble.”

So while we’re a little dubious about changing a winning contemporary formula, it sounds as if this is no gimmick and was almost a necessity. Fingers crossed for something… well, special! There’s no release date yet but we’d image Christmas might be a good bet! Check out the trailer below.