At the Star Wars Celebration convention in California, and at the end of a fun and informative Q&A with cast and crew, we got our first look at the brand spanking new Star Wars: The Force Awakens second teaser trailer. It is only about a minute and a half long, but there’s enough there to tease even the most sceptical of Star Wars fans into a frenzy.

The Q&A, with writer, director and producer J.J. Abrams and Lucas Films president Kathleen Kennedy, was live streamed across the globe at special screenings as well as on the internet. Here in London the legendary Star Wars veteran Warwick Davis hosted proceedings. What were some of the biggest points we learnt? Here, in relatively short and easy to digest form:

Ahhh, so now for the teaser trailer:

Now, here in another short and easy digest form is everything that you need to be absolutely HYPED to the max about:

So, you get all that? No? Watch it again. Watch it some more. Watch it maybe 5 or 6 times… December is looking too far away for us! 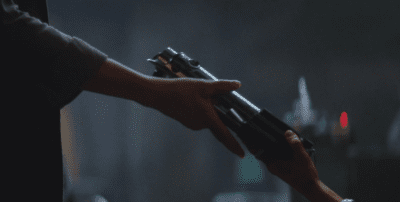 The Empire’s Storm Troopers – and might that be an Emperor in the back?

Millennium Falcon and TIE Fighter going at it, INSIDE OF ANOTHER SHIP

The old gang, Han and Chewie are back – and they’re home!