Bigelow and her regular script writer Mark Boal are famed for producing true story films based around meticulous research, with Detroit set show what happened in the motel, as well as the cover-up that followed. But just how did three people end up dead, killed by the people they should have been protecting? Read on for the true story of the Algiers Motel and the 12th Street Riot.

Around 3.45am on Sunday 23rd July, 1967, Detroit police officers raided an unlicensed, after-hours bar then known as a blind pig. Located just north of the corner of 12th Street (today Rosa Parks Boulevard) and Virginia Park Avenue, the police expected to find only a few partyers, but instead found around 85 African-Americans celebrating the return of two local GIs from the Vietnam War. The police decided to arrest everyone inside the building.

At the time of the arrests, tensions between local law enforcement and the people of the city was strained to say the least. The Detroit police department was 93% white, while the community was around 40% African-American. While police were arranging for transportation for the arrested people, a crowd of around 200 onlookers, according to reports, gathered on the street. Soon the onlookers began to surround the police. One of the blind pig’s owners’ sons jumped on the roof of a car and threw a bottle at the police, who left the scene quickly. 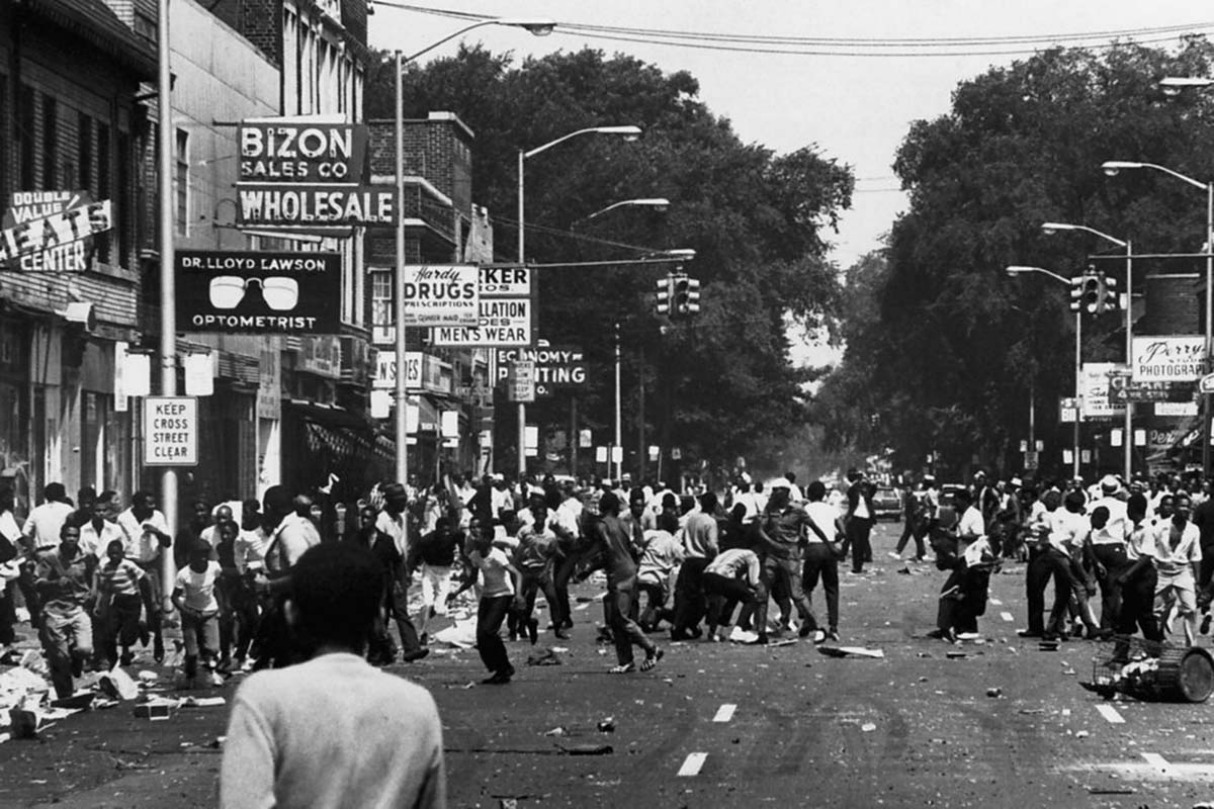 Once the police had left, a riot ensued and looting began in a clothing store adjacent to the incident. Soon after, full-scale looting began throughout Detroit’s Near West Side. Initially, police officers on the ground were instructed to hold back from responding to the rioting, so to not escalate the situation. By 6:30am, the first buildings were set on fire. Though firefighters attempted to stop the fire spreading, they were consistently being attacked or shot at by the looters. Eventually the Detroit Fire Department abandoned their efforts.

The 12th Street Riot had been going on for two days, and a curfew had been imposed, with many residents staying at home or keeping shelter for safety. National Guardsmen were activated by the Michigan government to patrol the streets and guard several large businesses. State Troopers and the US Army were also activated. 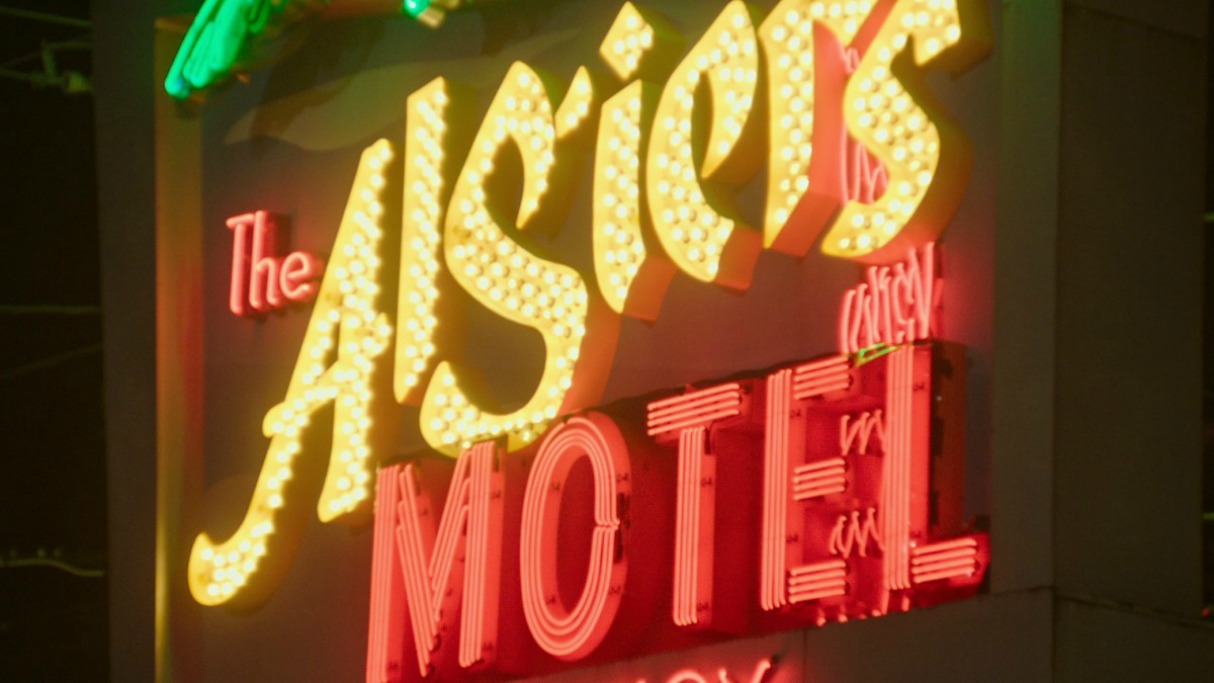 The Algiers Motel at 8301 Woodward Avenue was owned by Sam Gant and McUrant Pye, two African-Americans. The Algiers had been regularly raided by the police due to illegal activities at the motel, including the likes of prostitution. It was located nearby to the then-headquarters of General Motors and executives of the firm were said to be regular customers.

Throughout the two days of rioting, police had been the target for sniper firing, with one policeman already dead. On the early evening of Tuesday 25th July, a National Guardsman sent out a call to say he heard gun shots coming from the area of the Algiers Motel. A police dispatcher then sent out the message, “Army under heavy fire.” According to witnesses, only a few shots had been heard and it’s claimed that these were from a blank-cartridge pistol and no bullets had been fired.

Soon enough, 16 state and local police and National Guardsmen converged on the motel. Almost immediately, 17 year-old Carl Cooper was shot to death just inside the door. An African-American security guard, Melvin Dismukes, had attempted to play peacemaker but police then dragged several occupants who had taken refuge from the riots from their rooms and lined them up against a wall. Dismukes pleaded with the guests to cooperate with the police but the officers then beat and abused the occupants, threatening to kill them unless they told the officers who had was sniping from the motel. 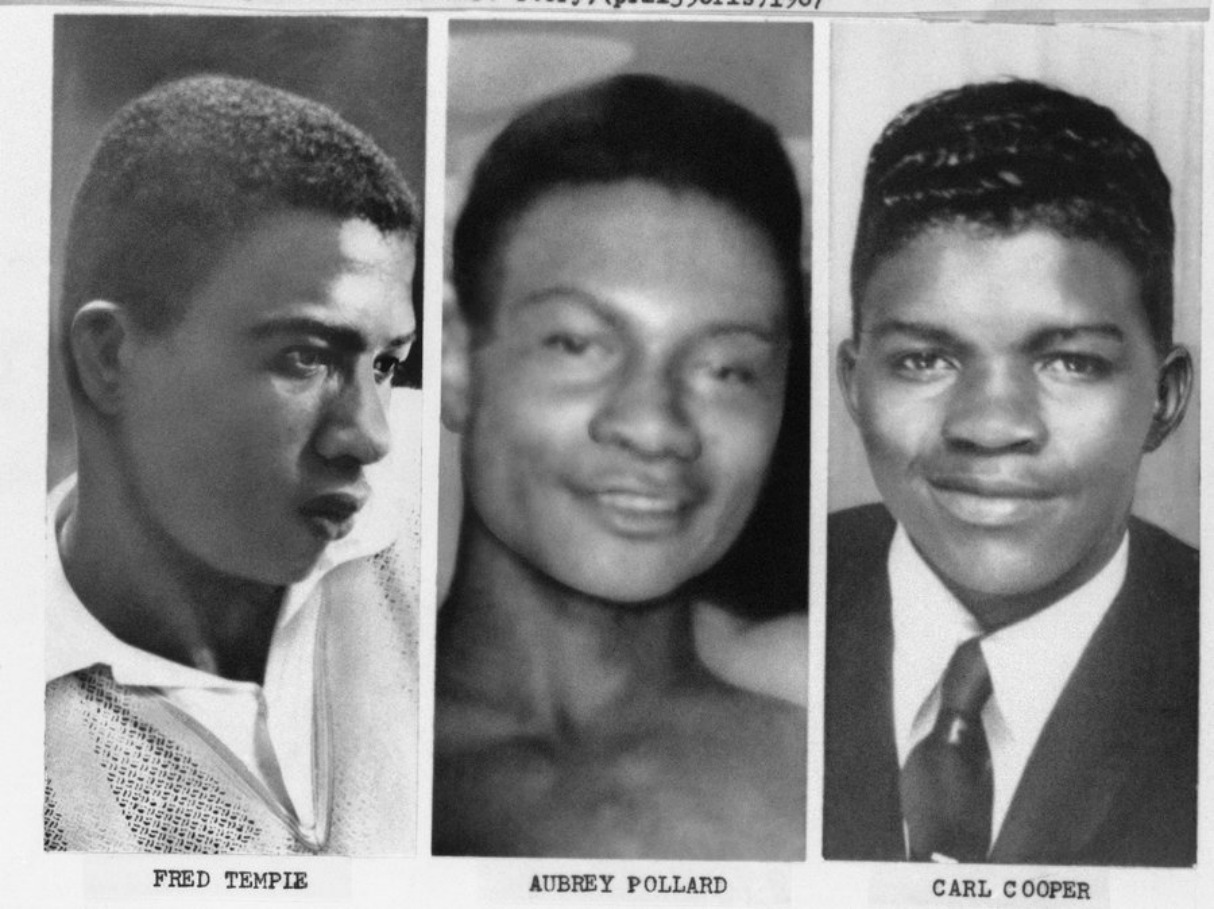 Two 18-year-old white women, Julie Hysell and Karen Malloy, were both forcibly stripped naked. 19-year-old Aubrey Pollard was taken to room A-3 by Officer Ronald August and was killed. August later claimed self-defence. 18-year-old Fred Temple’s body was found in the aftermath of the incident, also in room A-3. He was shot by Officer Robert Paille, who later testified it was in self-defence.

The officers did not report the deaths to the Detroit Police Homicide Bureau. The gun they were looking for was never found.

Aftermath of the Detroit Riot

Five days after the incident, the The Detroit News reported that one of the survivors, Robert Greene, accused a National Guard warrant officer of the murders. African-American Melvin Dismukes was the first to be charged for ‘felonious assault’. However, he was found Not Guilty after just 13 minutes of deliberation.

The three white officers accused of the killings of Cooper, Pollard and Temple — Ronald August, Robert Paille, and David Senak — were put on trial in 1969 for murder, conspiracy, and federal civil rights violations. They were found Not Guilty on all charges by an all-white jury.

The 1967 Detroit riot lasted 5 days in total, killing 43 people in the process. 33 were black and 10 were white. 24 of the black victims were shot by police officers and National Guardsmen. 1,189 people were also injured and there were a total of 7,231 arrests. 2,509 stores were burned or looted. 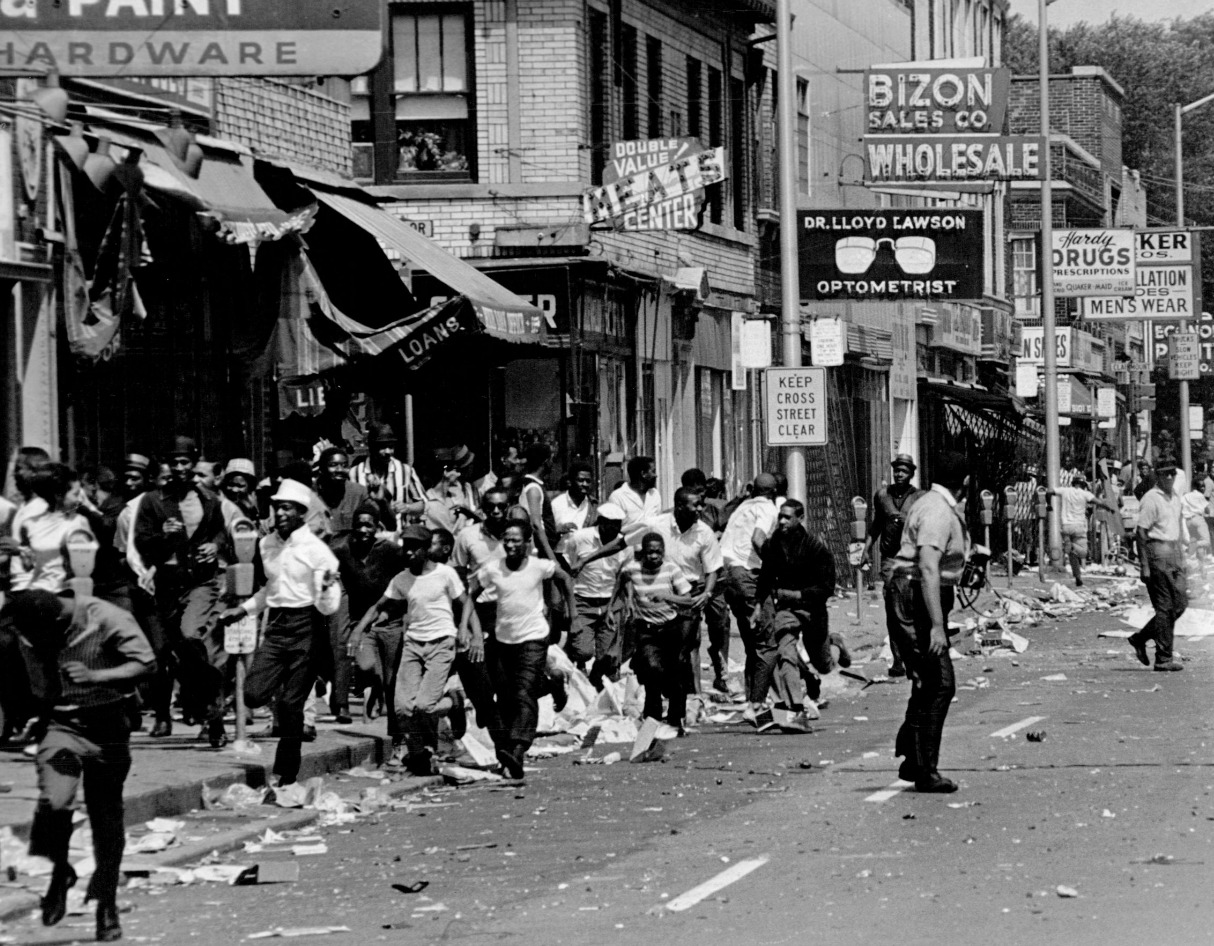 In January 2016, it was announced that Kathryn Bigelow and Mark Boal would make a film about the 1967 Detroit riots, with Bigelow directing from a script by Boal. John Boyega would later be named as the main lead, playing security guard Melvin Dismukes. Dismukes is quoted as saying in Variety magazine that the Bigelow’s film is “99.5% accurate as to what went down at the Algiers and in the city at the time.” 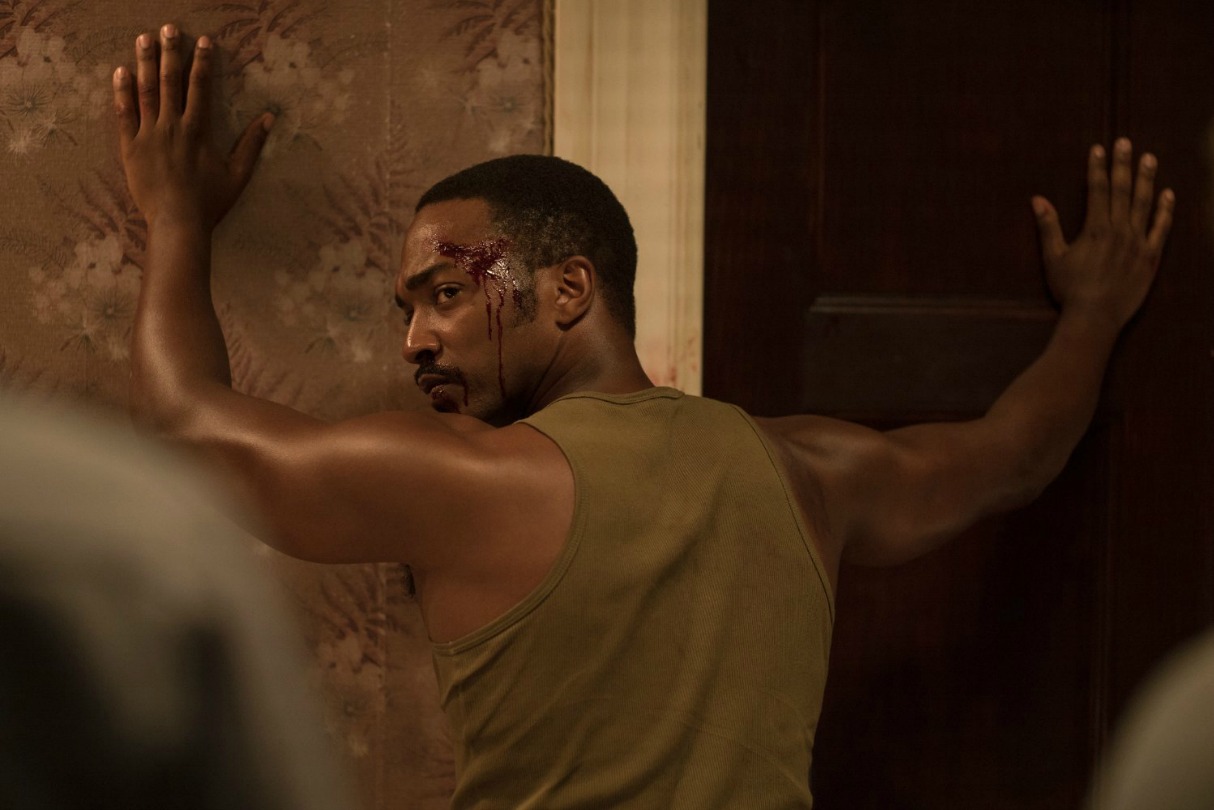 Jacob Latimore and Jason Mitchell were soon cast as Fred Temple and Carl Cooper respectively, while Game of Thrones and Skin star Hannah Murray was cast as Julie Hysell. Others members casted include Will Poulter, Algee Smith, Anthony Mackie and John Krasinski.

Directed by Kathryn Bigelow and written by Mark Boal, Detroit is set to be released in cinemas in the UK on 25th August. Check out the full trailer below. 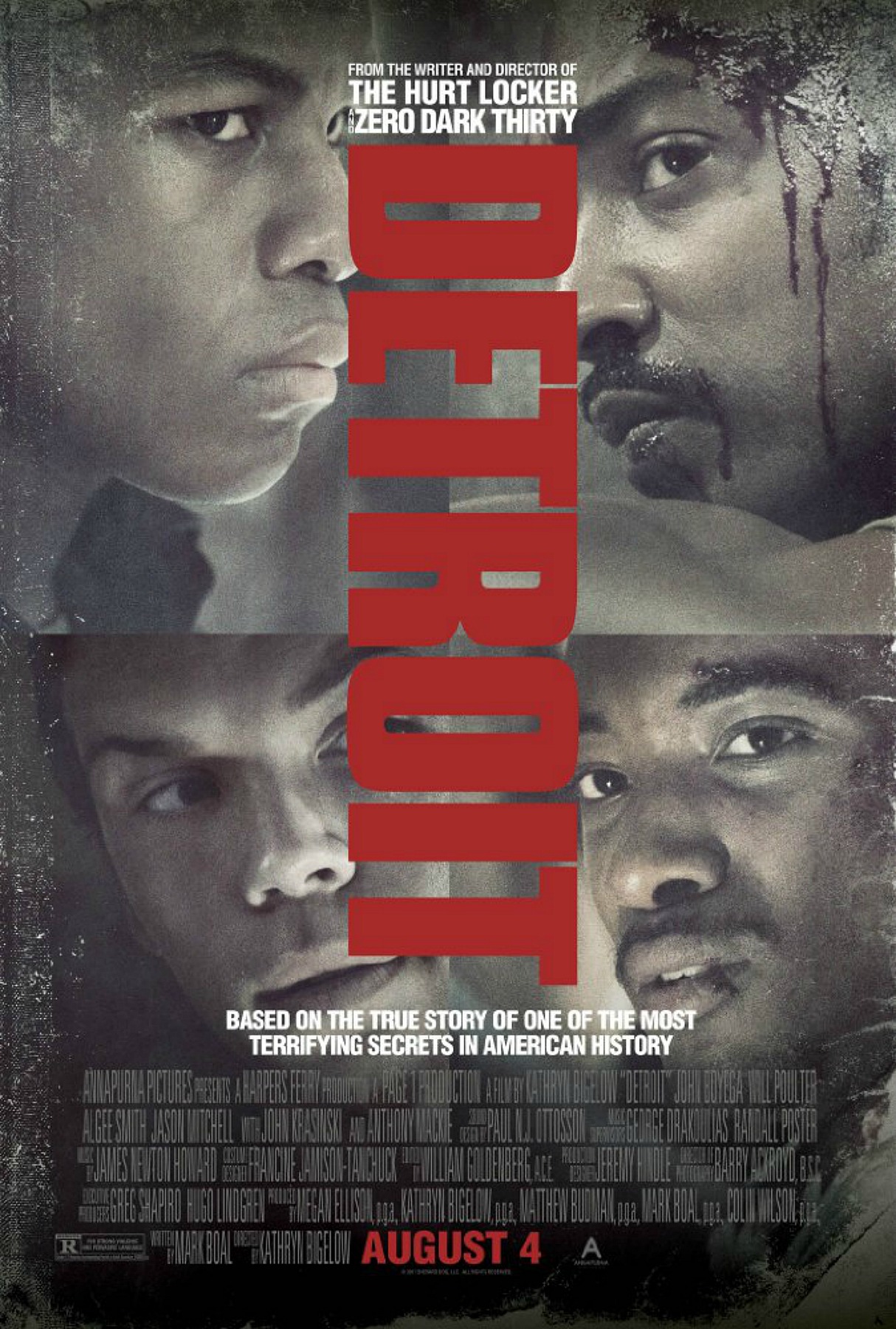