It’s one of the most recognisable franchises on the entire planet with over 36,600 restaurants reaching the furthest corners of the earth. But the man behind the rise of McDonald’s doesn’t even share his name with the Golden M. So how did Ray Kroc, a former jazz pianist and paper-cup salesman end up becoming the founder of one of biggest brands on the globe? And is he even really ‘The Founder’? Read on for the true story of Ray Kroc: the Founder of McDonald’s.

Ray Kroc was born on 5th October 1902 in Oak Park, a village near Chicago, Illinois. His parents, Rose Mary and Alois Kroc were both of Czech original. At the age of 15, Kroc lied about his age so he could become a Red Cross ambulance driver during World War I. He was sent to France in 1918, where it’s said he met fellow Illinois native Walt Disney, who had similarly lied about his age. The two served in Ambulance Company A together but barely kept in touch once they return after the war.

Having worked various jobs including a paper cup salesman and a jazz pianist, after World War II Kroc got a job as a milkshake mixer salesman for Prince Castle. The Prince Castle Multi-Mixer wasn’t selling well, but Kroc took note of an unusual order for eight units from a restaurant in San Bernardino, California. 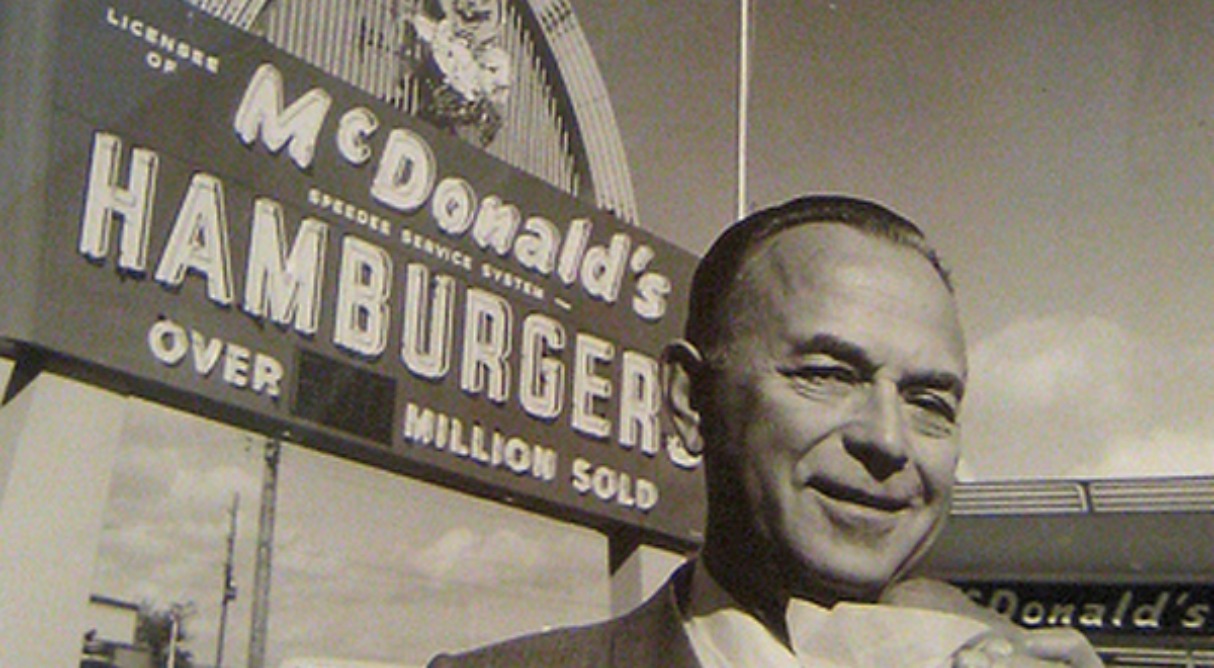 Born in New Hampshire to Irish immigrants, Richard and Maurice McDonald moved together to California in the 1920s. Having tried their hand at various jobs, in 1937, the duo decided to open a hot dog stand in nearby Pasadena. Typical for its era, the stand was more a drive through with no seats inside a restaurant. Drivers would wait in their cars while waiters would take then deliver orders.

After a successful run, in 1940 the McDonald brothers designed a purpose-built barbecue restaurant in San Bernardino, focusing on hamburgers and French fries. Called ‘McDonald’s’, the restaurant was profitable and well known in the area. But after 8 years of success, the brothers decided that the car-hopping service was too slow and inefficient.

In the Autumn of 1948, to maximise their profits Richard (Dick) and Maurice closed the restaurant so they could reopen it with a streamlined menu and a more efficient service system. They realised that by preparing food ahead of rush times, they could serve food far quicker. As such, in the revamp, they used infrared heat lamps to keep French fries warm. They were one of the first restaurants to use such technology.

So surprised at the unusually high order for the Multi-Mixer, Kroc travelled to San Bernardino in 1955 to see what kind of business could have such a need. During an interview with TIME magazine back in 1973, Kroc states; “When I got there, I saw more people waiting in line than I had ever seen at any drive-in […] I said to myself: ‘Son of a bitch, these guys have got something. How about if I open some of these places?'”

Despite various reports stating that Kroc then gave the brothers the idea to franchise, Richard and Maurice had actually already franchised around six restaurants before they met Kroc. The three did, however, quickly strike up a deal with the McDonald brother agreeing to pay Kroc 0.5% of all future sales, and Kroc agreeing to head up building the franchise empire.

While the deal was far more lucrative for the McDonalds, Kroc was eager to expand as quickly as possible, and over the next five years, he created a chain of 228 McDonald’s in locations all across the United States. The sites were chosen as they were in family-filled suburbs – the company’s target market.

The business quickly grew and the company soon developed the character of Ronald McDonald to appear on TV adverts and in restaurants in order to appeal to kids. By 1960, the McDonald’s restaurants were grossing $56 million annually.

Unsurprisingly, Ray Kroc soon became unhappy with his small cut of the profits and asked the McDonald brothers to name their price for a buyout. Richard and Maurice initially stated they wanted $2.7 million for the whole chain (barring the original restaurant) and the naming rights. Kroc is quoted as stating the price ended up being more around the $14 million mark. But as he confessed to TIME magazine in 1973, “I needed the McDonald name and those golden arches. What are you going to do with a name like Kroc?”

The deal created animosity between Kroc and the McDonald brothers with the original restaurant a point of contention. Kroc therefore decided to open a McDonald’s franchise right across the street from the brothers’ original restaurant. The duo were consequently forced to rename the original burger joint which eventually cost them the business.

For many years, McDonald’s celebrated ‘Founder’s Day’ by solely honouring Ray Kroc. However, in 1991, the company decided to honour the McDonald brothers too. “They are founders, they founded the concept,” said Fred Turner, the then McDonald’s Senior Chairman while talking to the Sun Journal. While adding, “Ray Kroc founded the company that developed that concept into the largest food service organization in the world.”

As it stands today, 68 million people eat McDonald’s food each day in 118 countries across the globe; a McDonald’s opens on average every 14.5 hours; and thanks to their Happy Meals, McDonald’s is the world’s largest distributor of toys. 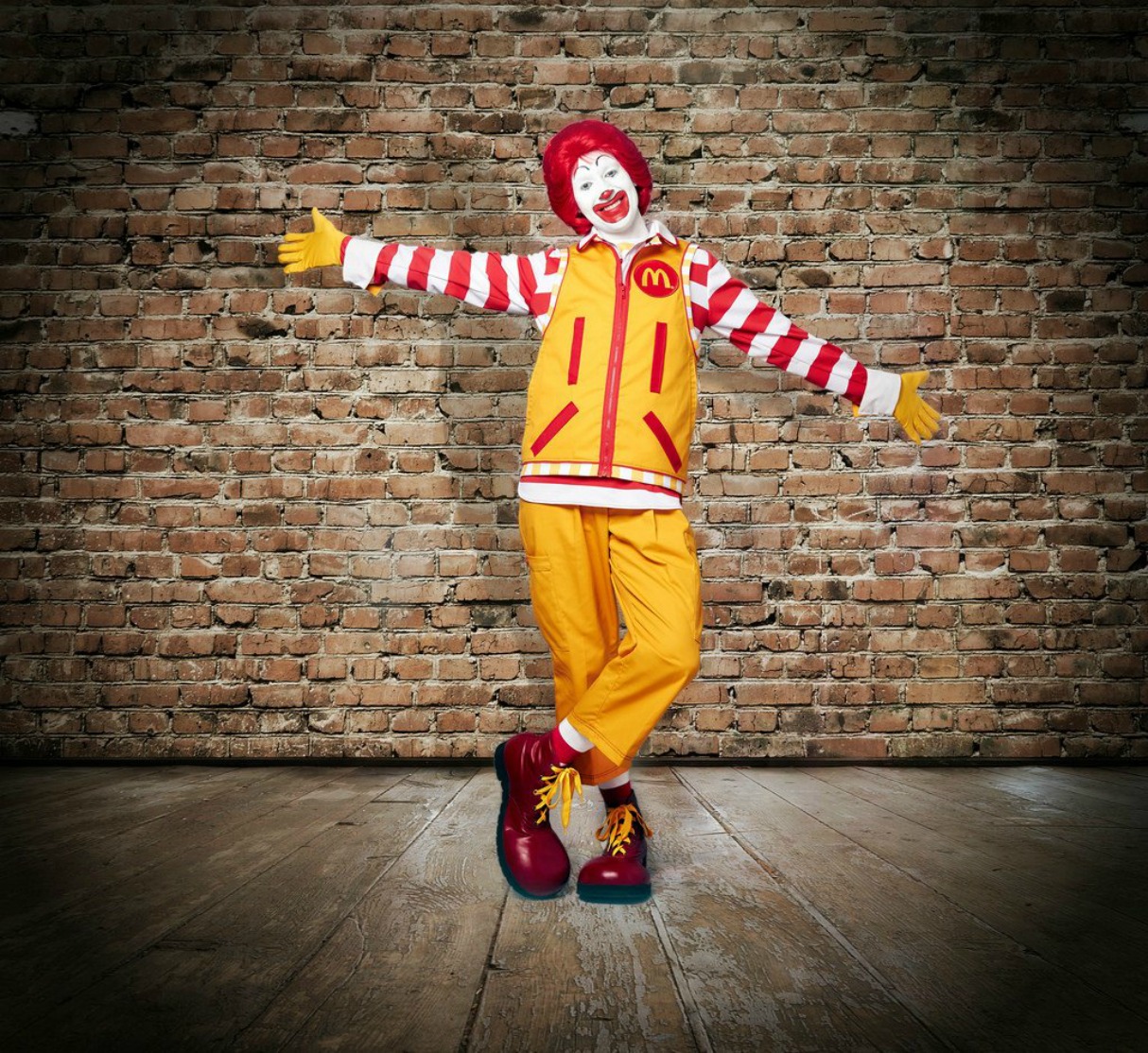 Legacies of the McDonald Brothers and Ray Kroc

In 1974, Ray Kroc decided to retire from his role of CEO of McDonald’s, where he went on to follow his passion for baseball by buying the San Diego Padres. Ray Kroc died of heart failure in San Diego on 14th 1984 at the age of 81.

Much of Ray Kroc’s franchise infrastructure still remains today, including the likes of his ‘Hamburger University’ which he set up in 1961. It’s still used to train franchisees on the proper methods for running a successful McDonald’s restaurant, and as it stands more than 80,000 people have graduated from the program.

Having been the first cook behind the grill at the original McDonald’s, on 30th November 1984, Richard McDonald was asked to commemorate McDonald’s 50,000,000,000th (50 billionth) hamburger by Ed Rensi, the then president of McDonald’s USA.

The original San Bernardino McDonald’s was demolished in 1976 and the site was sold to the Juan Pollo restaurant chain. The site is now the HQ for Juan Pollo, but it also homes a McDonald’s restaurant and a Route 66 museum. 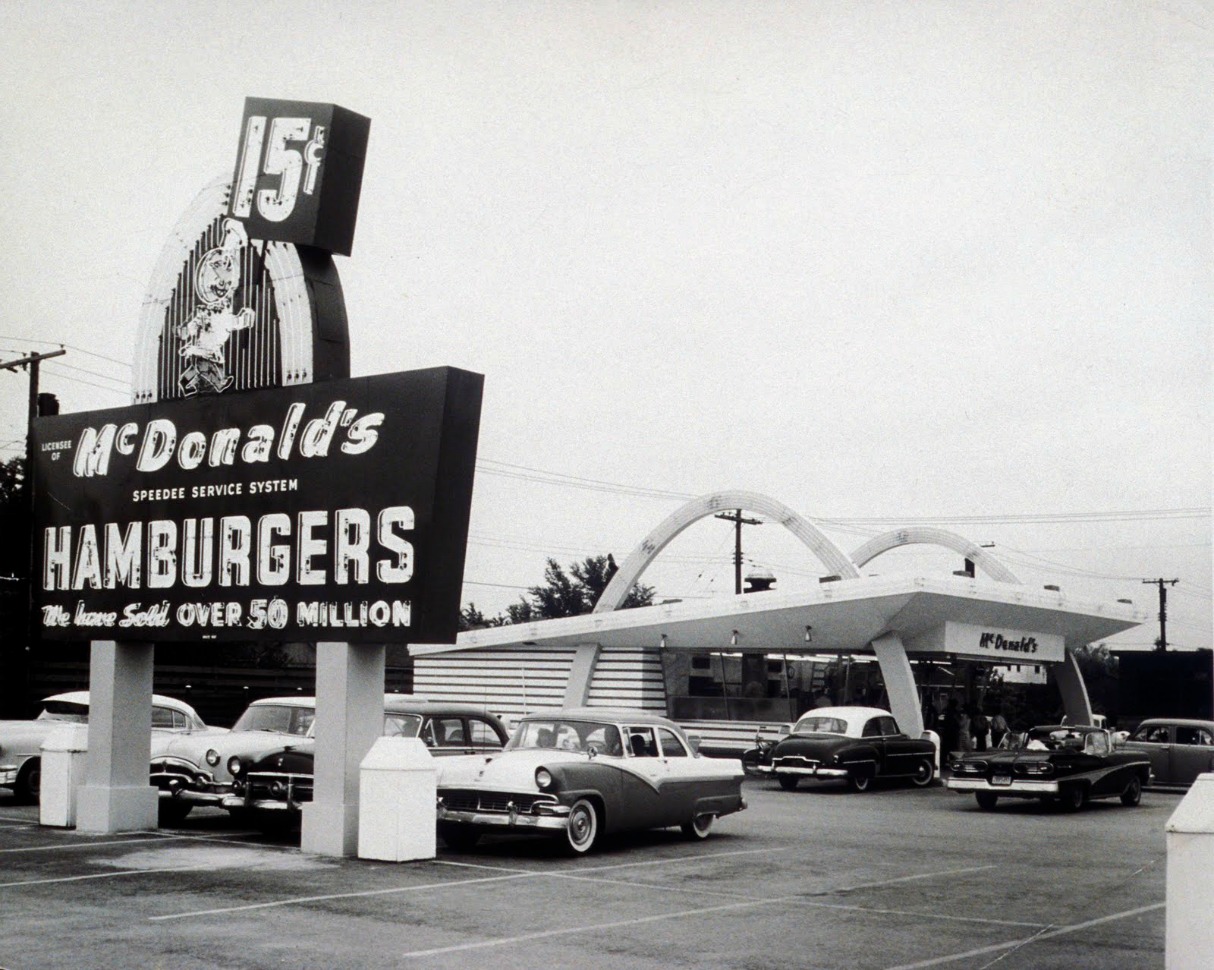 In 2014, it was announced that a film would be made about the rise of McDonald’s and its founder Ray Kroc. Having been penned by Robert Siegel, Michael Keaton was soon announced to play the role of Kroc.

Directed by John Lee Hancock and co-starring Nick Offerman John Carroll Lynch, and Laura Dern, The Founder is due for release here in the UK on Friday 17th February. Check out the trailer below. 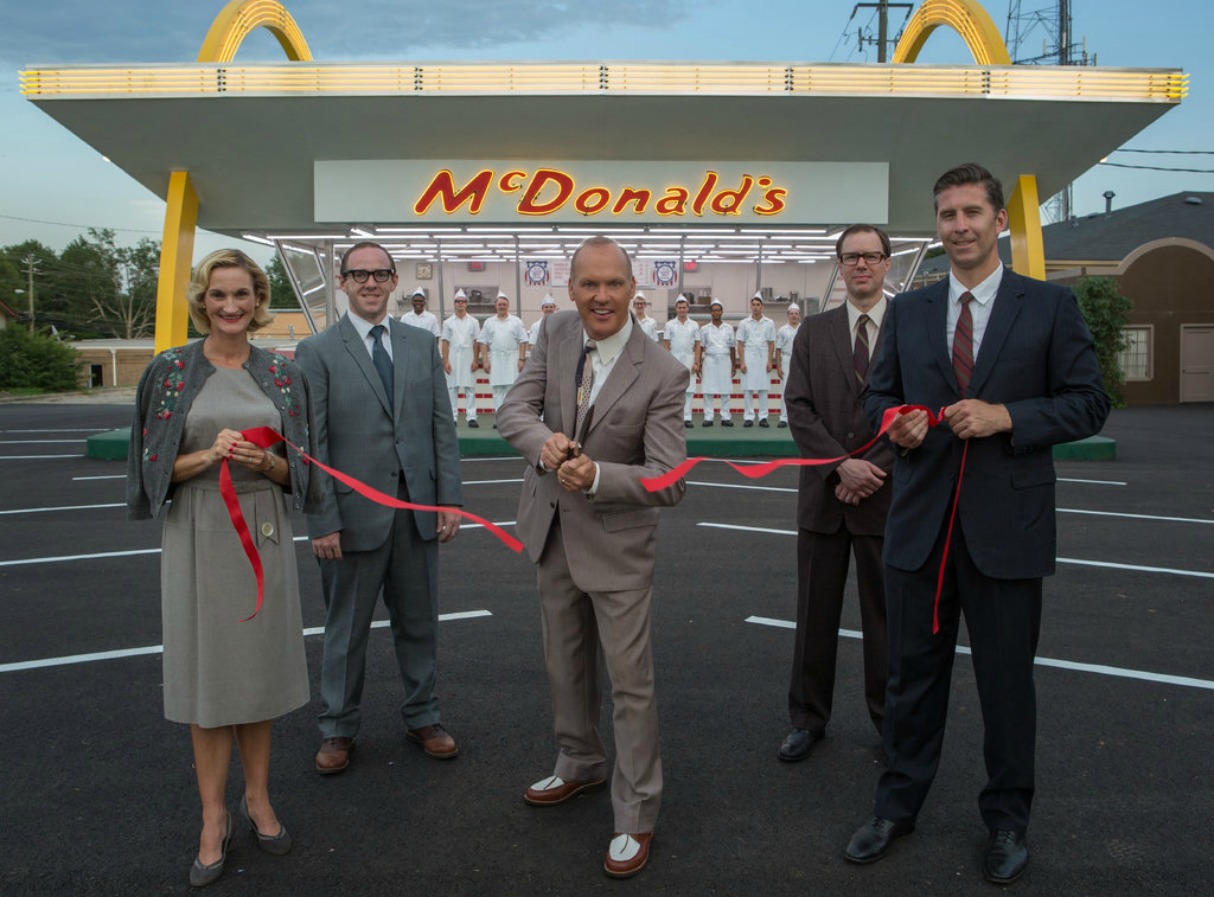 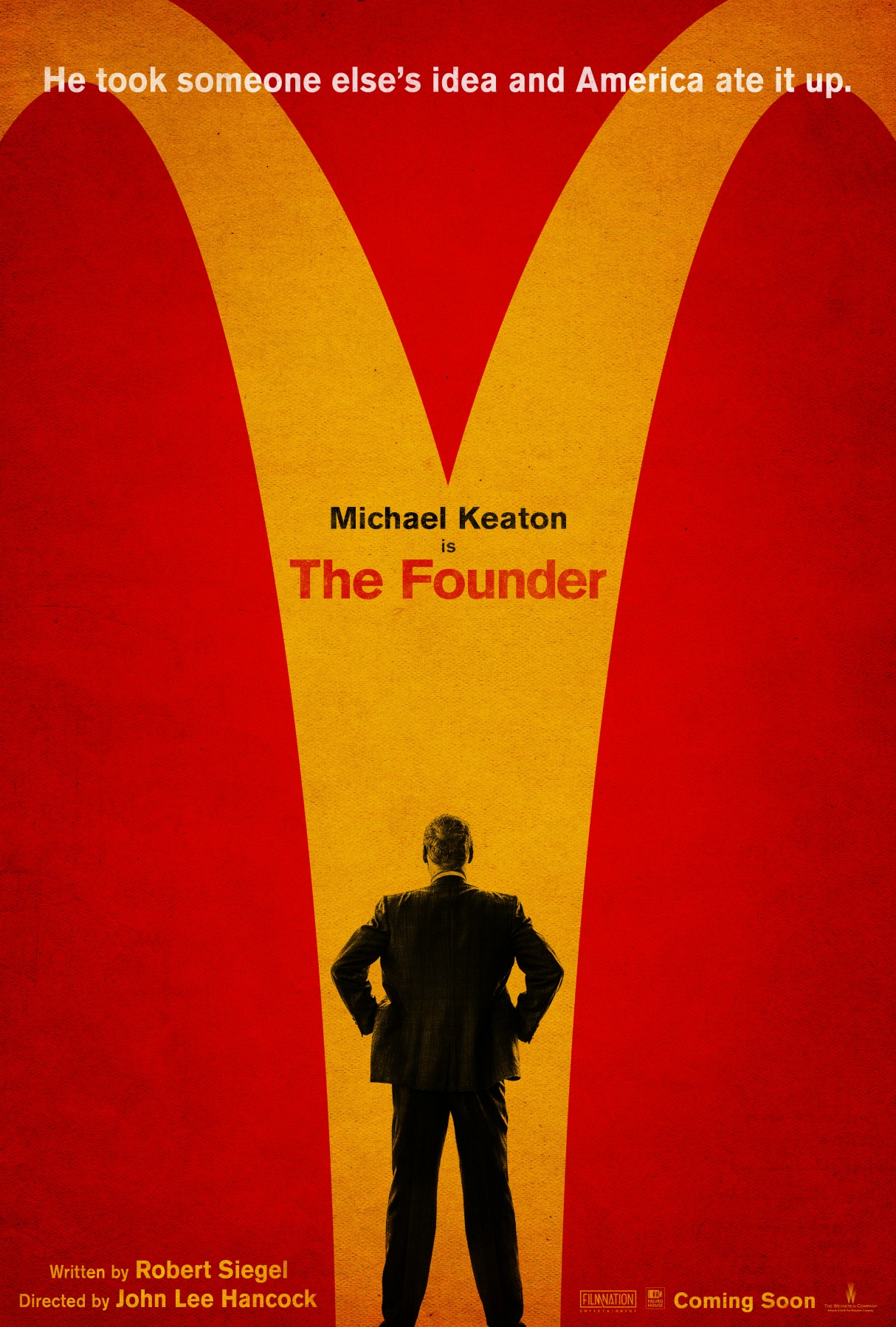