One of the Oscar big hitters, Spotlight, was released last weekend. The film tells the true story of the Pulitzer Prize-winning Boston Globe investigation that would shock the world and create a state of crisis in one of the world’s oldest institutions.

The Boston Globe’s ‘Spotlight’ team investigated allegations of a long history of abuse within the Catholic Church. Their year-long investigation uncovered decades of not only abuse but also a cover-up which spanned the highest levels of Boston’s religious, legal and governmental establishments. Here is the true story of Spotlight.

Since its inception, the Boston Globe’s Spotlight Team has enjoyed more autonomy and freedom than most other news operations across the United States. The dedicated team of investigative journalists typically spent weeks and months reporting stories rather than focusing on 24-hour revolving news.

The department tended to focus on governmental corruption and organised crime. Thanks to the uncertain nature of the work and the amount of time it could take to publish material, Spotlight was expensive to run. Spotlight investigations traditionally occupied four of the Globe’s best journalists – journalists who otherwise would have probably produced hundreds of other stories within a year. As such, many newspaper organisations couldn’t afford to run similar operations. 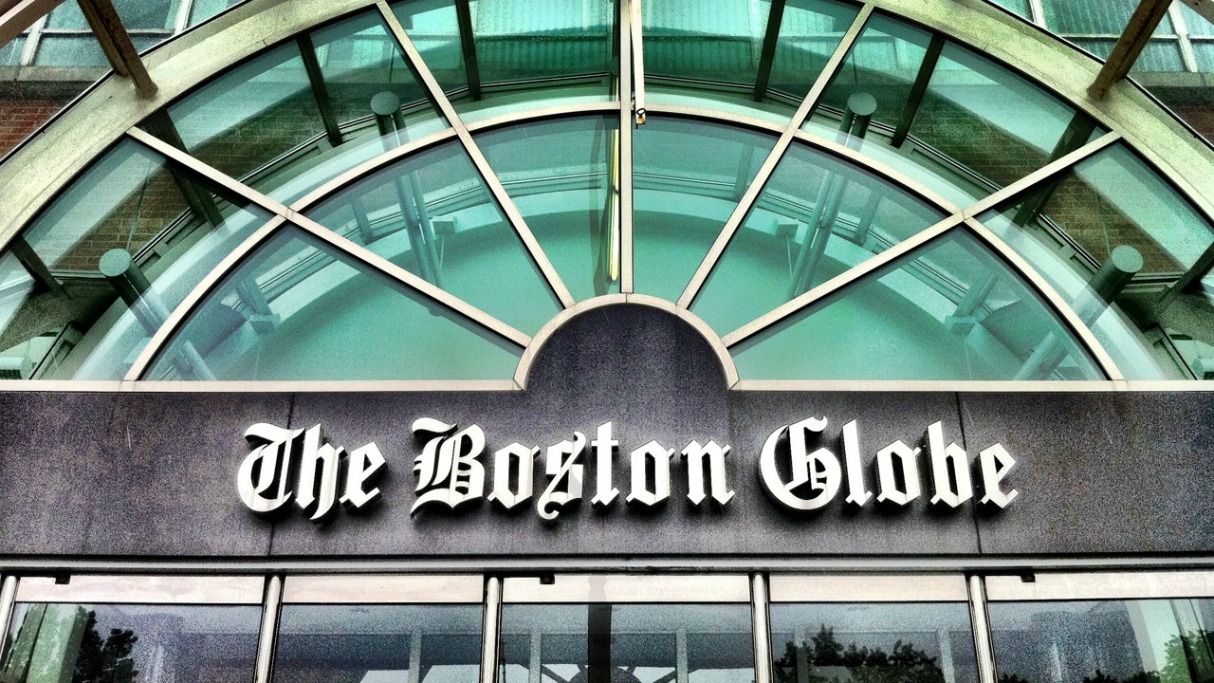 The 2001 Spotlight Team had relatively little experience with only Matt Carroll having had one year of experience on the unit. Carroll specialised in computer-assisted reporting. Walter ‘Robby’ Robinson headed up the team having started in late 2000. He had over 25 years of experience with the Globe as local political reporter, White House correspondent and Middle East bureau chief. Ben Bradlee Jr., whose father had been part of the team who broke the Watergate Scandal at the Washington Post, was Assistant Managing Editor for investigations.

Michael Rezendes was brought onto the team by Robinson and Bradlee having worked as a political reporter for 11 years at the Boston Globe. Finally, Sacha Pfeiffer, an experienced court reporter, was brought onto the team. She had previously written about a case involving allegations of child abuse by John Geoghan, a Boston priest who allegedly molested over 130 children during his ministry. 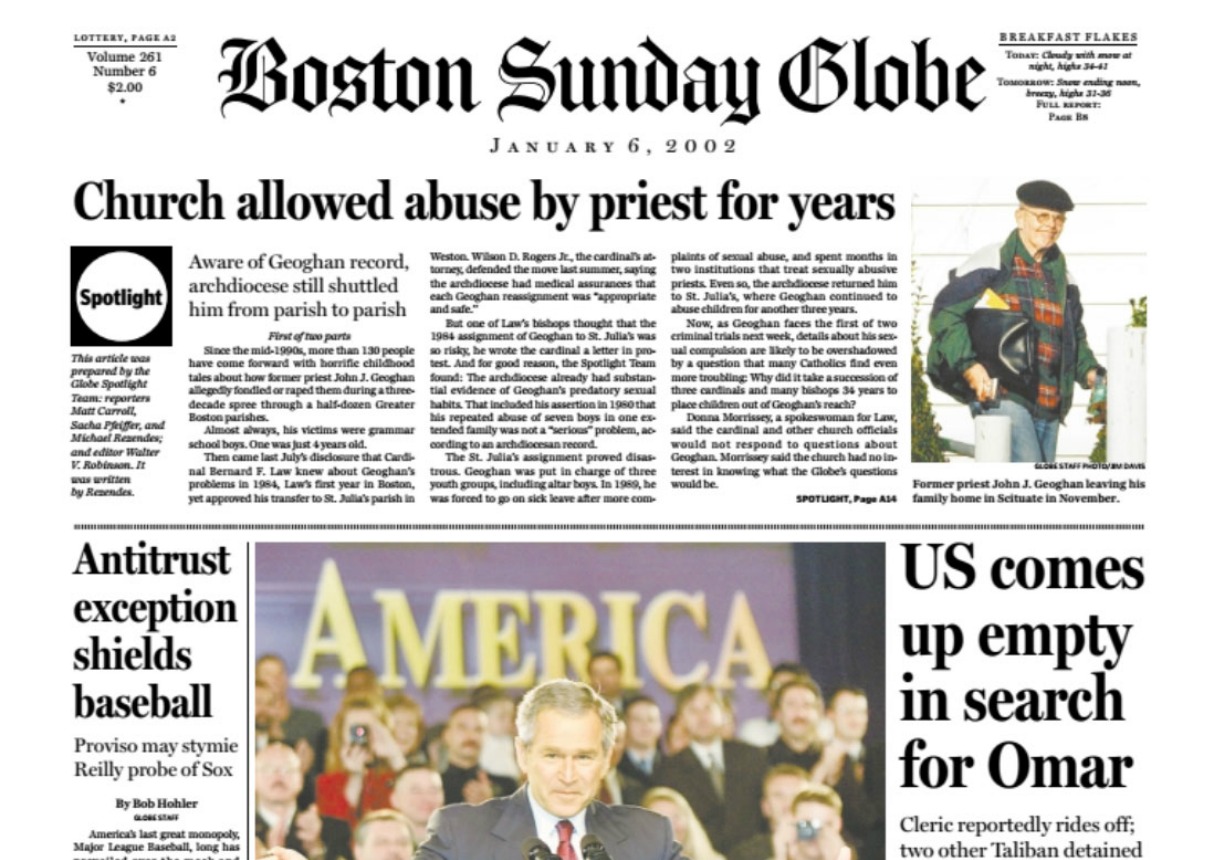 In 2002, criminal charges were brought against five Roman Catholic priests in Boston – John Geoghan, John Hanlon, Paul Shanley, Robert V. Gale and Jesuit priest James Talbot. The charges led to the conviction and sentencing of each to prison.

The Spotlight Team’s investigation and reporting on these priests is often cited as being the main reason these cases were brought into the national limelight and ultimately why convictions were given. The coverage of the cases also encouraged other victims to come forward, resulting in more lawsuits and criminal cases across the whole of America and Ireland.

Spotlight interviewed 30 to 40 victims during their research around Boston, as well as talking to lawyers and priests in a year-long investigation. At one point, the investigation was put on hold for eight weeks while reporters concentrated on the events of 9/11. The first story detailing the abuse was published in the Boston Globe on 6th January 2002.

While he was not their only source of information, a victim named Phil Saviano helped Spotlight throughout their investigation. Saviano had been abused by a priest named David Holley when he was a boy and had consequently contracted AIDS. 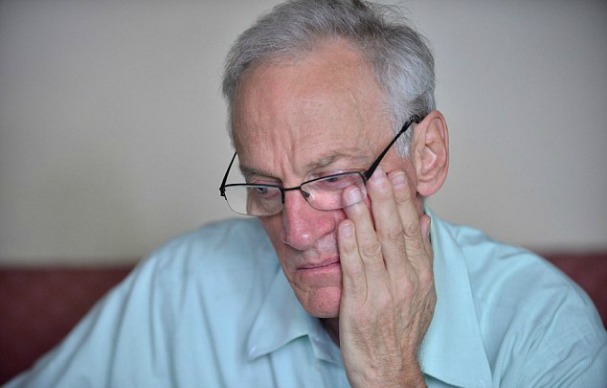 Before the 2001 Spotlight investigation, Saviano was offered a five figure pay-out from the Church for the damages caused by the AIDS contraction. The pay-out would have included a confidentiality agreement. Believing he only had a few weeks to live, Saviano refused the offer.

While searching the Boston Globe ads for Christmas gifts, Saviano saw a small story in the Metro section about accusations of child abuse by David Holley in New Mexico. Saviano got in touch with the Spotlight team and provided them with his story.

As patterns of abuse started to emerge, so did the scale of the cover-up. It became clear that members of the Catholic Church had sexually abused minors on a scale that accusations reached thousands over several decades. It appeared that Catholic bishops had reassigned the accused to other parishes to avoid criminal arrests, despite still being in positions where they would have unsupervised contact with minors. 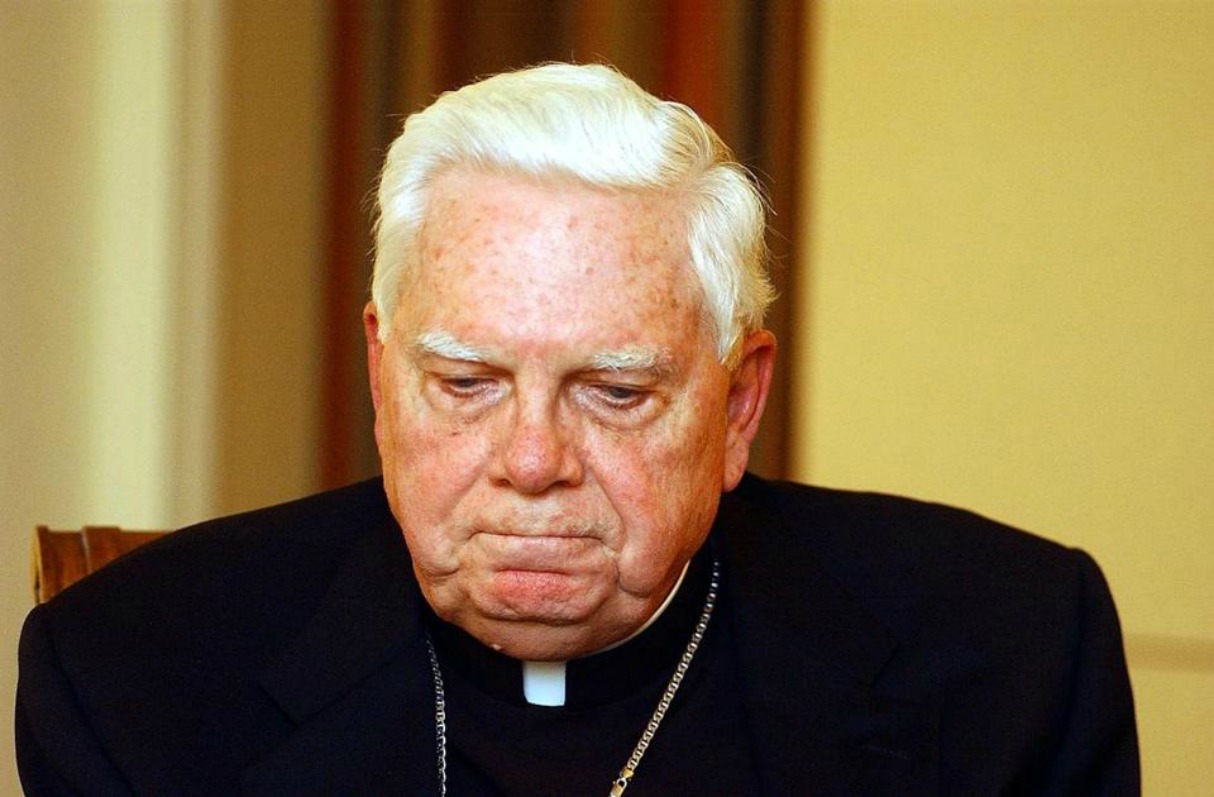 One man at the heart of the Boston cover-up was Cardinal Law, the Archbishop of Boston. Documents revealed that Law had moved Paul Shanley and John Geoghan, both accused of child abuse, from parish to parish. Later, it was discovered that Father Shanley even advocated the North American Man/Boy Love Association, a paedophile advocacy group in the States.

While questioned about the cover-up, Cardinal Law said his duty was to seek psychiatric help for the accused rather going to the police. Cardinal Law’s term as Archbishop of Boston rapidly became untenable thanks to the widespread media coverage Spotlight’s investigation had caused. 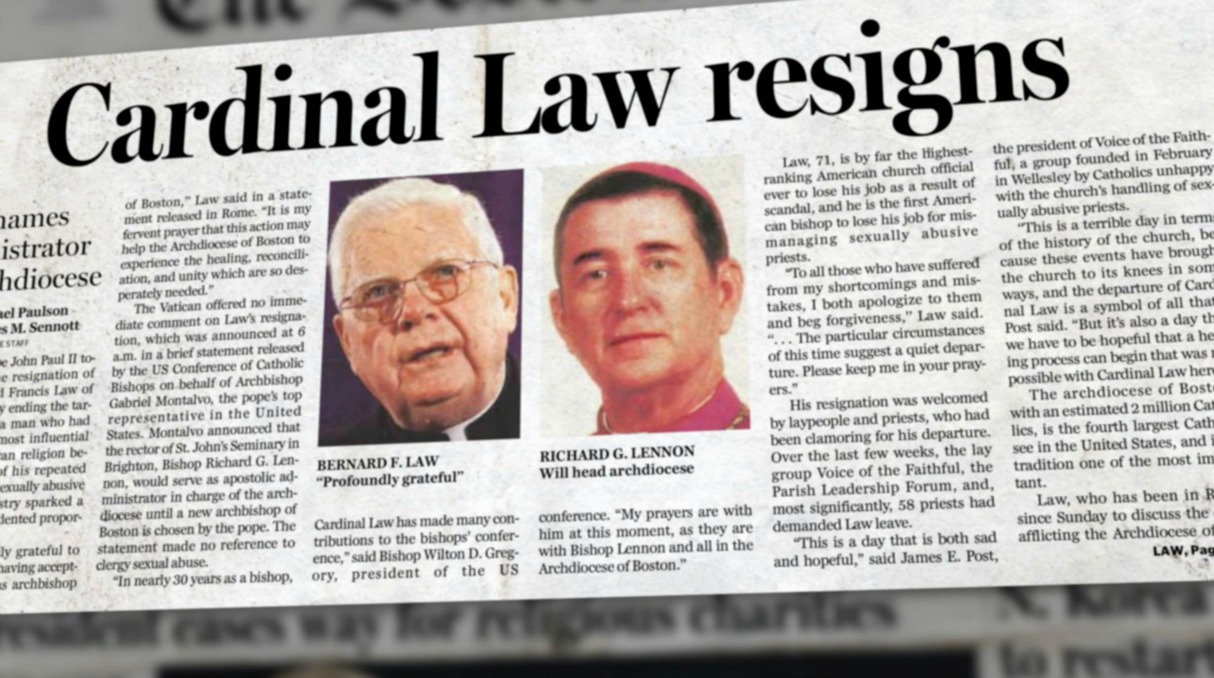 In September 2003, the Archdiocese settled most of the abuse-related claims for a reported $85 million (£59 million). Bishop Sean O’Malley was appointed Archbishop of Boston on 1st July 2003, having already dealt with sexual abuse scandals in Palm Beach and Fall River. A spokesman for Cardinal O’Malley recently said that he would not discourage people from seeing the Spotlight film.

O’Malley has since reiterated his commitment to protection minors from abusive priests telling the Boston Globe, “The Archdiocese of Boston is fully and completely committed to zero tolerance concerning the abuse of minors. We follow a vigorous policy of reporting and disclosing information concerning allegations of abuse.”

The events in the Archdiocese of Boston soon became a national Roman Catholic Church sex abuse scandal with more and more victims coming forward, having previously been too scared to come forward. The Boston Globe alone received calls from “over 300 victims in just a month or two,” according to Walter Robinson.

In 2003, the series of articles in the Boston Globe received a Pulitzer Prize for Public Service. The newspaper was awarded the Prize, ‘for its courageous, comprehensive coverage … an effort that pierced secrecy, stirred local, national and international reaction and produced changes in the Roman Catholic Church’ according to the Pulitzer website.

The filming of Spotlight was said to be was very much a collaborative effort between the actors and the real life journalists. Pfeiffer and Rezendes, particularly, spent a lot of time with their respective actors discussing the events and their experiences during the investigation. 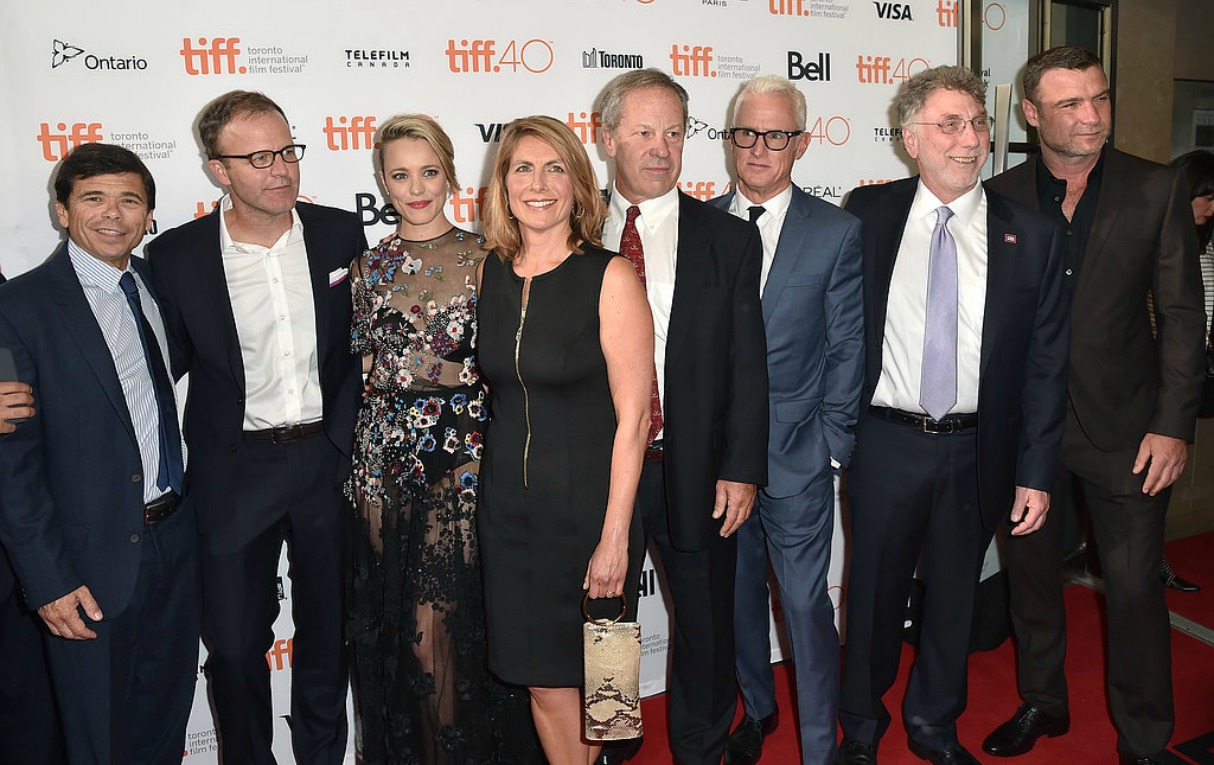 Spotlight has received plaudits from audiences and critics alike. It’s been nominated for six Oscars including Best Film, Best Director for McCarthy, and Supporting Actor/Actress for Ruffalo and McAdams, respectively. It also gained three Golden Globe Awards for Best Motion Picture – Drama, Best Director and Best Screenplay, though lost out on all three on the night. It’s currently favourite to win Best Film and the Academy Awards on 28th February.

The film has received criticism from Jack Dunn (played by Gary Galone in the film), a board member at Boston College High School where allegations had been made, for portraying him as indifferent to the scandal. Dunn protests he knew of the issues and worked immediately to respond to them. Walter Robinson and Sacha Pfeiffer have since responded by saying they firmly standing by their recollections of the day Dunn was interviewed and that they are accurately portrayed in the film.

Spotlight is out in cinemas now. Check out the trailer below.