The fear of having to use a public toilet can be very real. Usually found in breezeblock edifices behind town square car parks, locks on cubicles are often broken and they’re almost always breeding ground for all sorts of unpronouncable bacteria. But we’re pleased to report that there are some incredible examples of thoughtfully designed public toilets out there. Here’s just of few of the world’s best…

Settled amongst cherry, plum, and peach trees and overlooking a stunning secret garden, you’ll struggle to find a more idyllic pit stop than this cracker in Japan which is dubbed the ‘most peaceful public toilet in the world’. Designed by acclaimed Japanese architect, Sou Fujimoto, the cubicle is made from clear glass exposing you visually to the elements. But thankfully there’s a two-metre tall wooden roll wall surrounding the garden and visitors enter through a single lockable door to keep things private. Unfortunately for Joes, it’s female only. 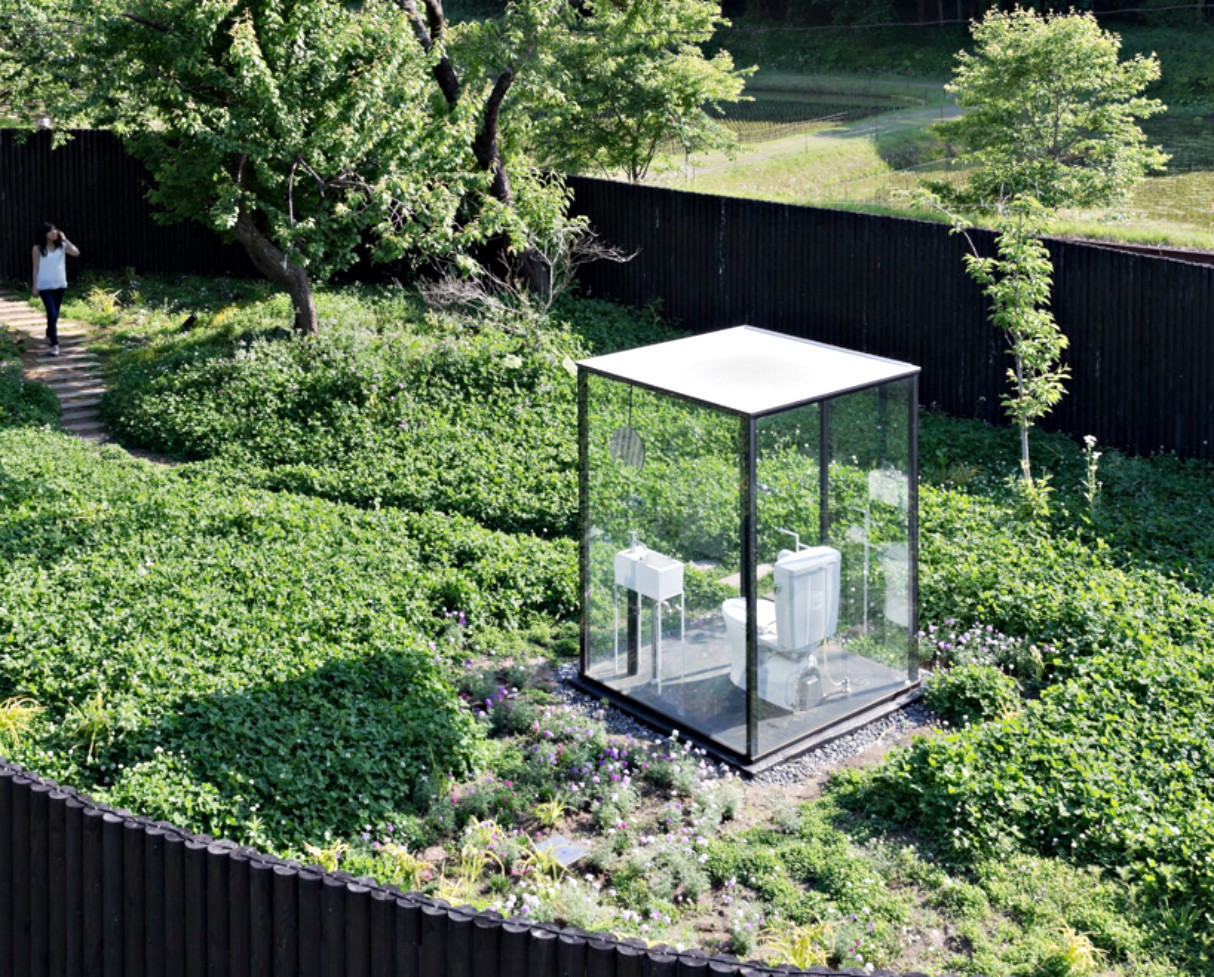 The main problem you find in any public toilet is privacy. But this recycled beauty located in a forest just outside Bath couldn’t really be any more secluded. The composting toilet was designed by Invisible Studio, who provided the facility for the practice’s self-built woodland workshop. It was built using offcuts from that project as well as materials scavenged from the surrounding woodland. The stilted structure is set over a steep slope near the studio building and features a dark exterior composed of fibre-cement tiles and a door made from vibrant red polycarbonate sheeting for a bit of ambience. Simple but so effective. 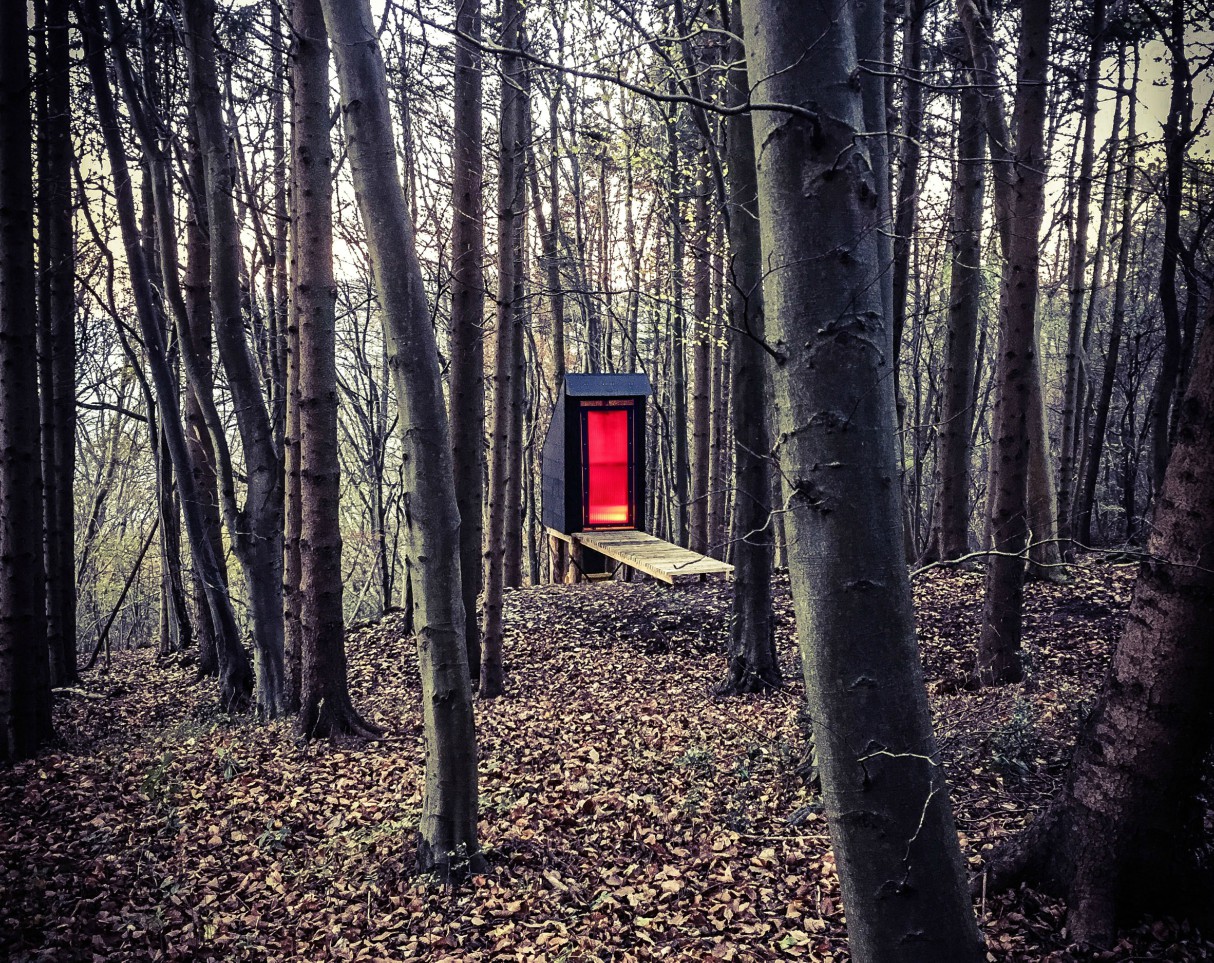 The first Norwegian entry into our list, visitors to Skjervsfossen waterfall can watch the Storelvi River rush by their feet while using the toilet thanks to a glazed floor panel in the restrooms of this service building. Designed by Bergen-based architecture studio Fortunen, the restroom is clad in local stone to emphasise its connection with the surrounding landscape, while inside the bathrooms are lined with pine plywood stained with a warm shade that picks up some of the tones from the vegetation and trees on the opposite bank of the river. 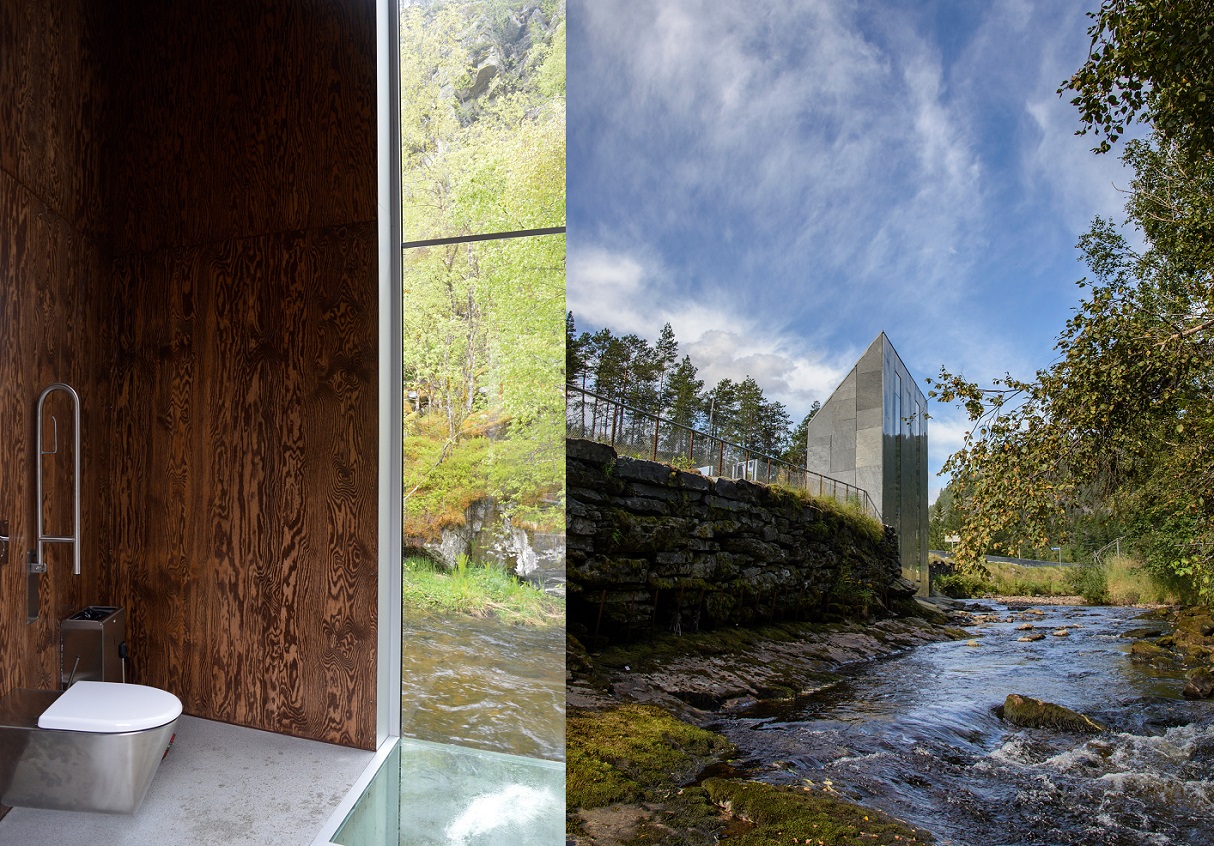 ‘Rough and ready’ is taken to the next level at this Trail Restroom in Austin, Texas. Created by Miro Rivera Architects, the park located restroom features a set of 49 different pre-rusted steel plates arranged in a spiral to form the wall of the public toilet. It was the first new public toilet built in 30 years on the Lady Bird Lake Hike and Bike Trail, a public park that follows the banks of the Colorado River in the south of the city. The toilets themselves might not be to everyone’s taste with rust and exposed pipes adding to a real industrial design feel which we happen to love. As well as framing toilets, the steel panels also mark out an outdoor area used for hand washing. 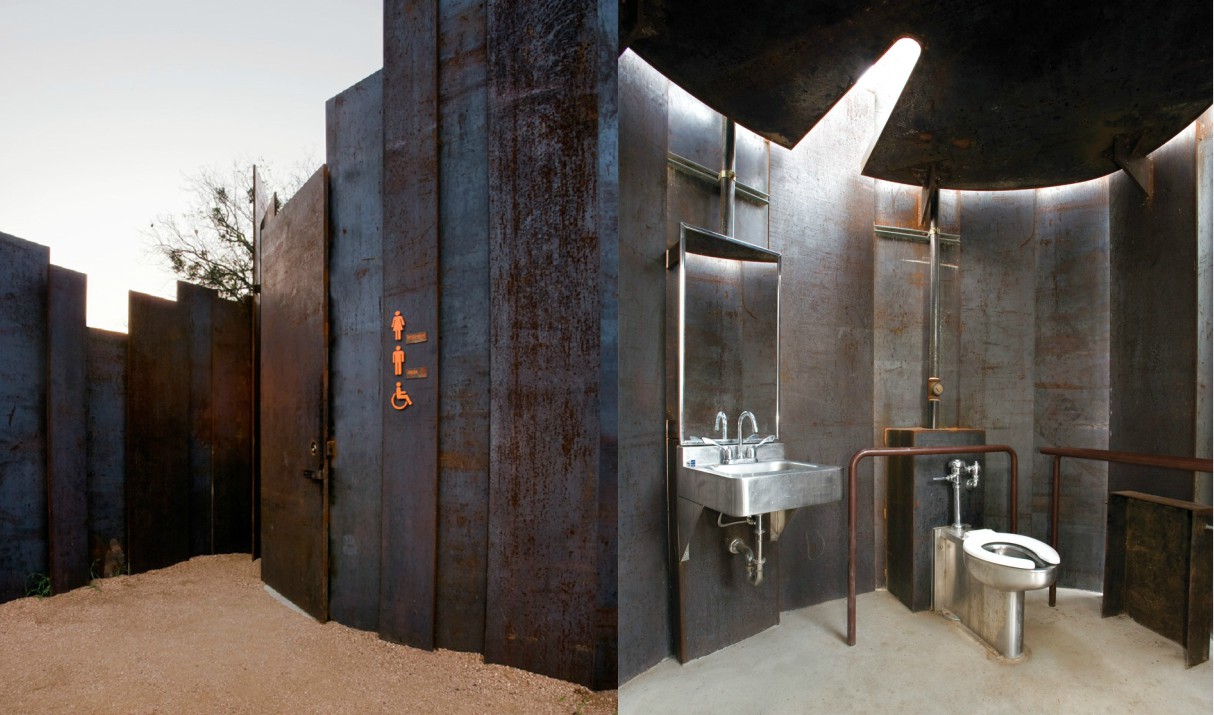 If you’ve ever travelled to the country, you’ll know just how harrowing Indian public toilets can be. Which is why architect Rohan Chavan built a forward-thinking public restroom around an old tree in the city of Thane, just for women. Featuring a hot-pink sitting area where ‘women can socialise’, the 3m x 9m block is aptly named The Light Box – Restroom for Women. There are four female-only toilets in total with the branches of the central tree protruding through a transparent roof. The space also includes a vending machine for female hygiene products, as well as mobile phone charging points and even a panic alarm system for women’s safety. 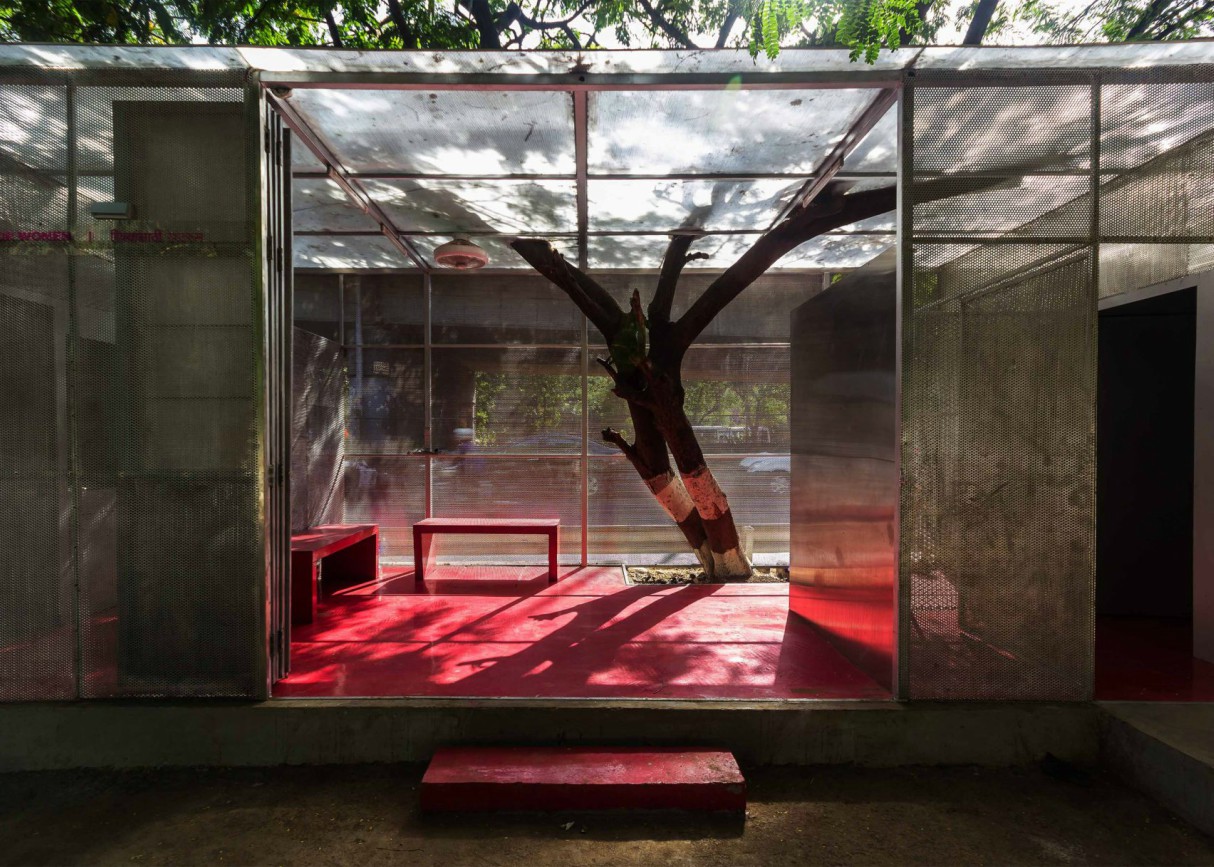 While maybe not the most aesthetically pleasing design on our list, the UriLift is probably the most innovative. Designed to combat public urination disorders when culprits have had their fill, the UriLift toilet rises from the ground during the sociable night time hours and sinks below during the daytime. Placed strategically in hotspots of drunken disorder, over 100 UriLifts have been installed in locations around the UK including London, Reading, Colchester, Taunton, and Newquay, and in various European cities such as Belfast, Amsterdam and Rotterdam. 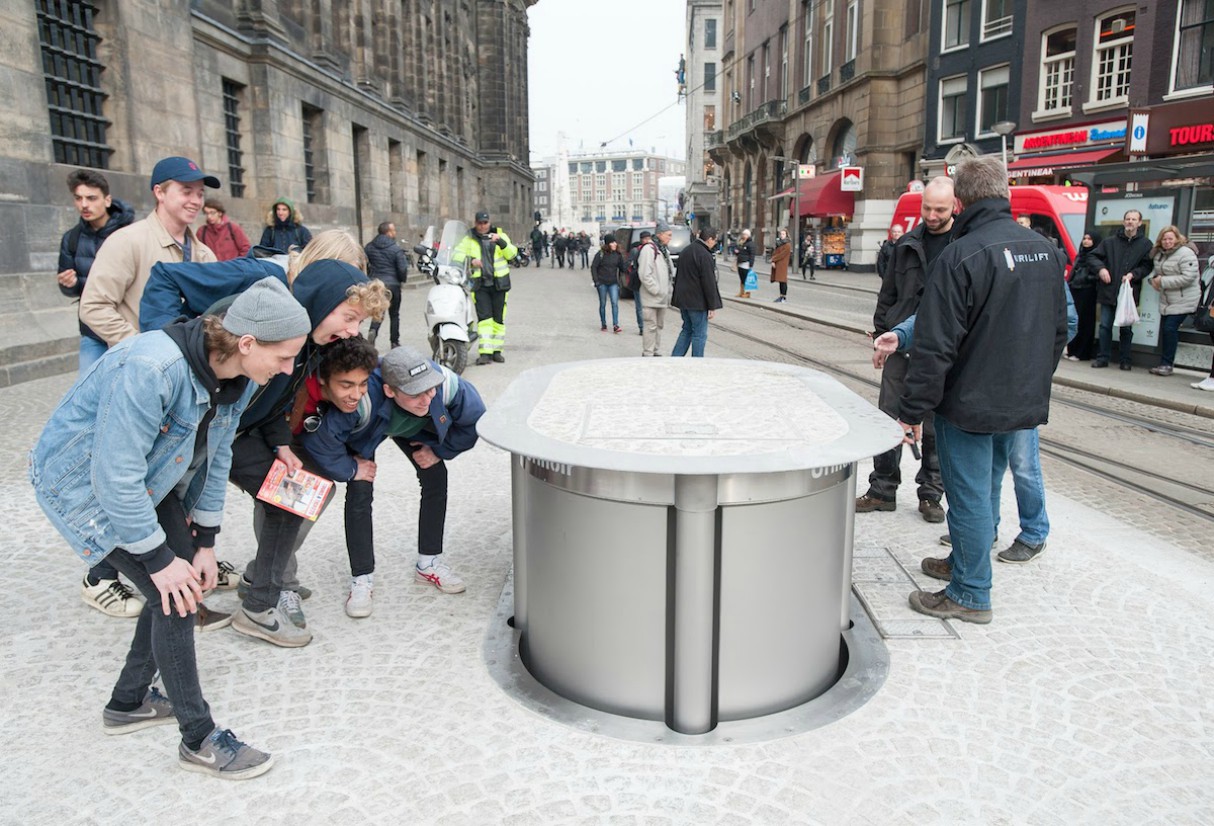 But our favourite public toilet – since you’re asking – is undoubtedly found at the Ured Concrete Memorial in Ureddplassen, Norway. Designed by Oslo-based studio Haugen/Zohar Arkitekter (HZA), its location next to the Helgelandskysten Norwegian Scenic Route in the northern region of Gildeskål will be virtually impossible to beat. Ureddplassen is popular with tourists and local residents as it provides a beautiful spot to observe the Northern Lights in winter, and the midnight sun in summer. The entire space has been recently updated and features a memorial for 42 crew members who lost their lives when the submarine Uredd was attacked during WWII. At the opposite end of the terrace, you’ll find the undulating concrete roof of an accessible toilet. The wave-like form is lined with translucent glazing so it glows like a beacon when night comes around. With form and function, this toilet is a beauty! 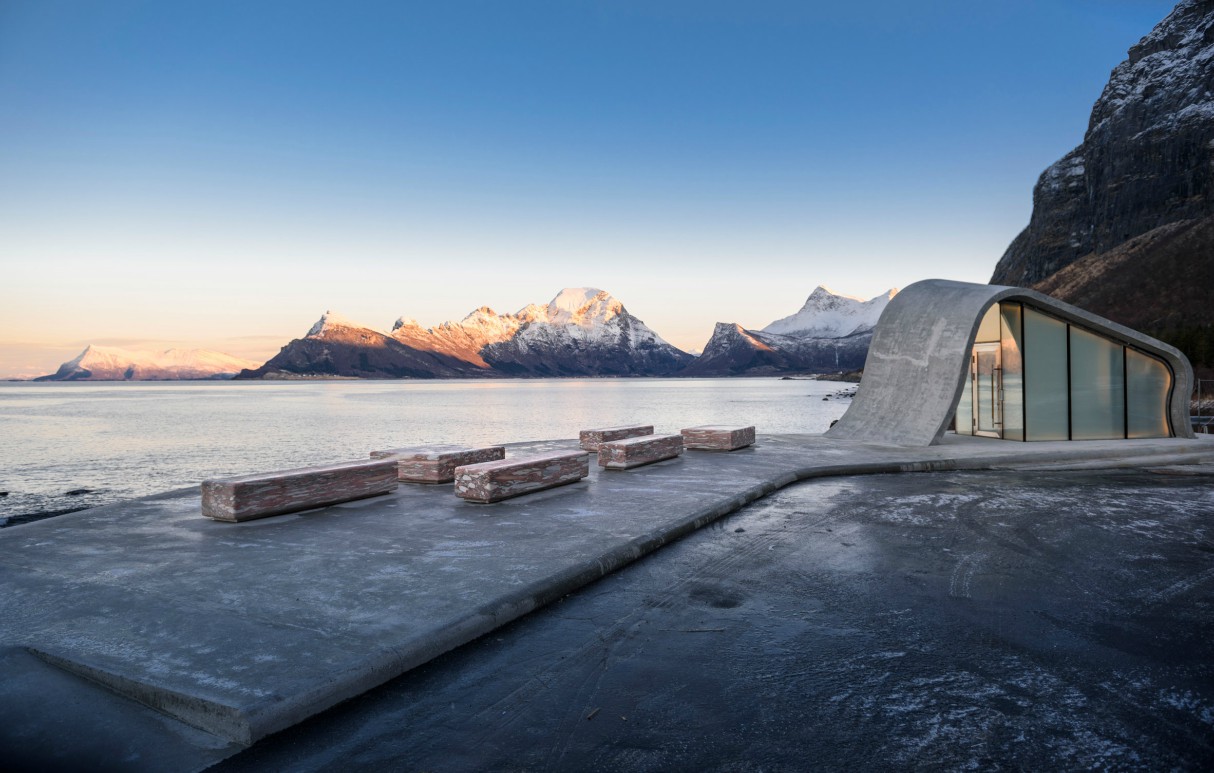 If you’re into the weird and wonderful, check out some of the World’s Weirdest Museums.