UFC Ring Girls:
Every red blooded male pretty much loves MMA (well we hope), and there is no single organisation in the world that has made MMA more well known than the mighty UFC. As well as having the very best fighters in the world, they also have some of the hottest MMA ring girls to boot. Here is a selection of our finest UFC Ring Girls. Agree? Want to add one? Just leave a comment below. 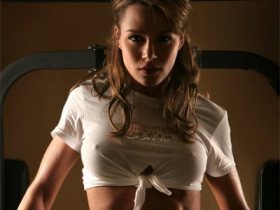 The original and most famous UFC ring girl, she even appears in the UFC Undisputed video game…

Brittney Palmer first appeared as a UFC Ring Girl in 2010, but is now seen on many shows and main events. And she has certainly won a place in our, erm, hearts…

Ali ‘shot to fame’ after appearing as a UFC girl and has since hosted a few reality TV shows and had bit parts in some pretty shocking movies. There is only one place this girl will end up (we hope)….

Amber is the official model for Xyience after coming to fame as a UFC ring girl, her CV also boasts minor parts in Oceans 11 and Rush Hour 2.

Anne doesn’t just have the body, she is the official spokesmodel for both the UFC and Mikeys Liquer (a UFC sponsor) and splits her time between LA and Vegas.

Canadian Born Edith (Labelle) again shot to fame as a UFC ring girl and currently seems content with being one of the newest girls in the octagon. She hopes to build a real estate portfolio and do film, and from our view it seems she already has some worthwhile ‘assets’…

Cooled down yet? Come on, let us know who is your favourite… Hit us in the comments below.

Also check out the latest UFC Ring girl from the UK, Carly Baker. Making her debut in 2013!