If you’re looking for a weekend away full of culinary delights in Europe – and why wouldn’t you be – the Italian city of Bologna is often referred to lovingly as ‘La Grassa’ (the Fat One). This is the home of tortellini and the famed mortadella sausage, and is slap bang in the Emilia-Romagna region which boasts the finest producers of Parma ham, Parmigiano cheese, and balsamic vinegar.

But as well as its food, the city is also known for its beautiful arcades, medieval architecture, left-wing politics, and bustling social scene, partly down to its university which is one of the oldest in Europe. If that sounds like your brand of a weekend break, read on for our city guide to Bologna – the food capital of Italy.

Flights to Bologna International are regular and very reasonably priced. Depending on the time of year, you can grab a direct flight from either London Heathrow, London Gatwick, London Stansted, Manchester, Bristol, or Edinburgh for as little as £35. The London flights also go at multiple times a day, so there are plenty of options. Once you land, the airport is only a 20 minute drive into the centre so taxis or the Aerobus are easy to navigate.

As always with city breaks, there are plenty of options when it comes to accommodation, with Bologna offering up the luxury as well as the value. If it’s luxury you’re after, you’ll struggle to beat the centrally located Grand Hotel Majestic ‘Gia Baglioni’ which can be booked from around £250 a night. For something on the cheaper side of things, Hotel Touring or the charming I Portici Hotel are also great options at around £80 a night. 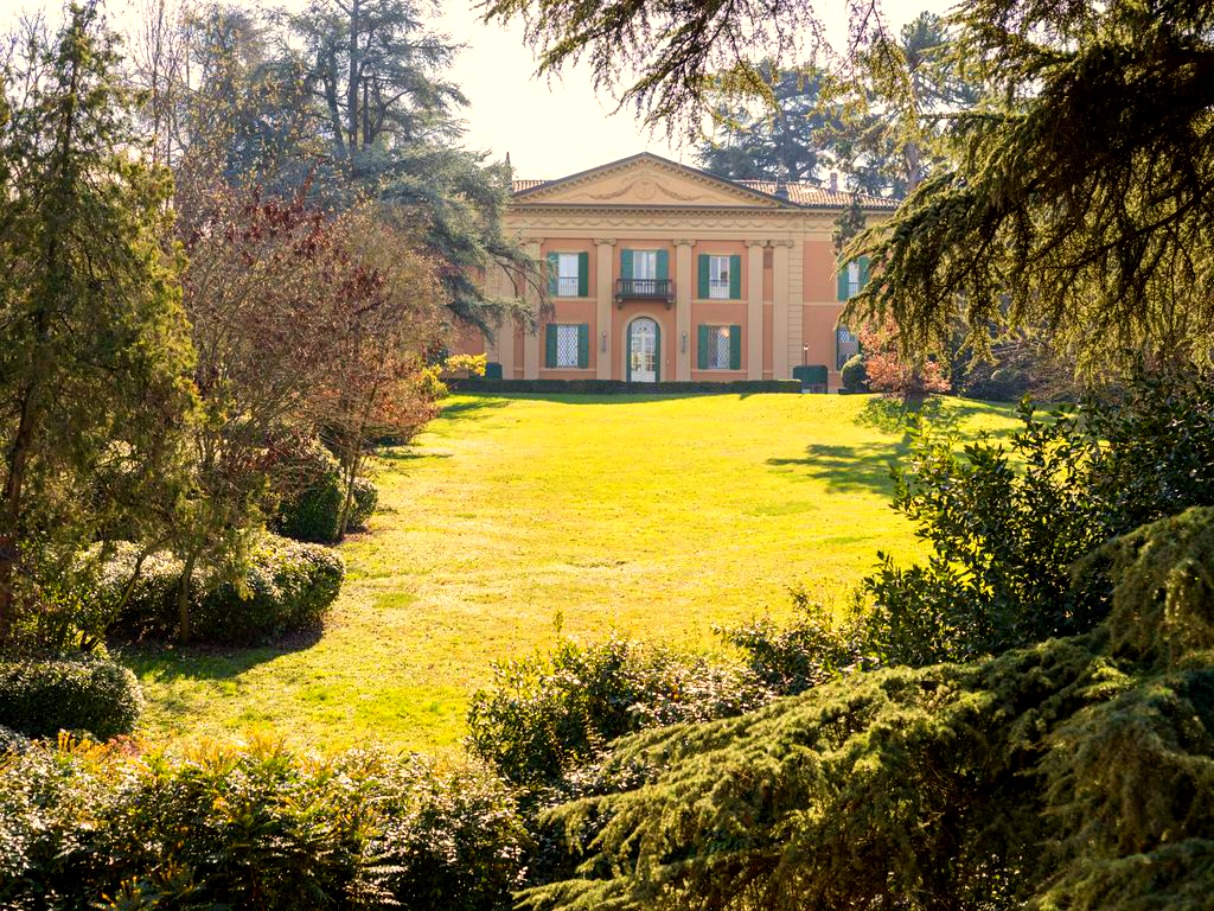 But if you’ve got the budget and don’t mind a half hour stroll into the city, we’d recommend staying in a cottage closer to one of the many surrounding hills. We stayed South-West of the city on Via Siepelunga and couldn’t have wished for much more from our host, Giuliana. It was also a bargain for 6 people at £131 a night.

Sights to See in Bologna

Bologna is a city with character and history, and as such has gained many nicknames throughout the years. As well as ‘La Grassa’ (The Fat One), it’s also sometimes referred to as ‘La Dotta’ (The Learned One) which refers to the city’s university which was founded in 1088, making it the world’s oldest. It’s also known as ‘La Rossa’ (The Red One), which not only alludes to the almost uniform terracotta medieval buildings and porticoes, but also makes reference to Bologna’s left-wing political history. 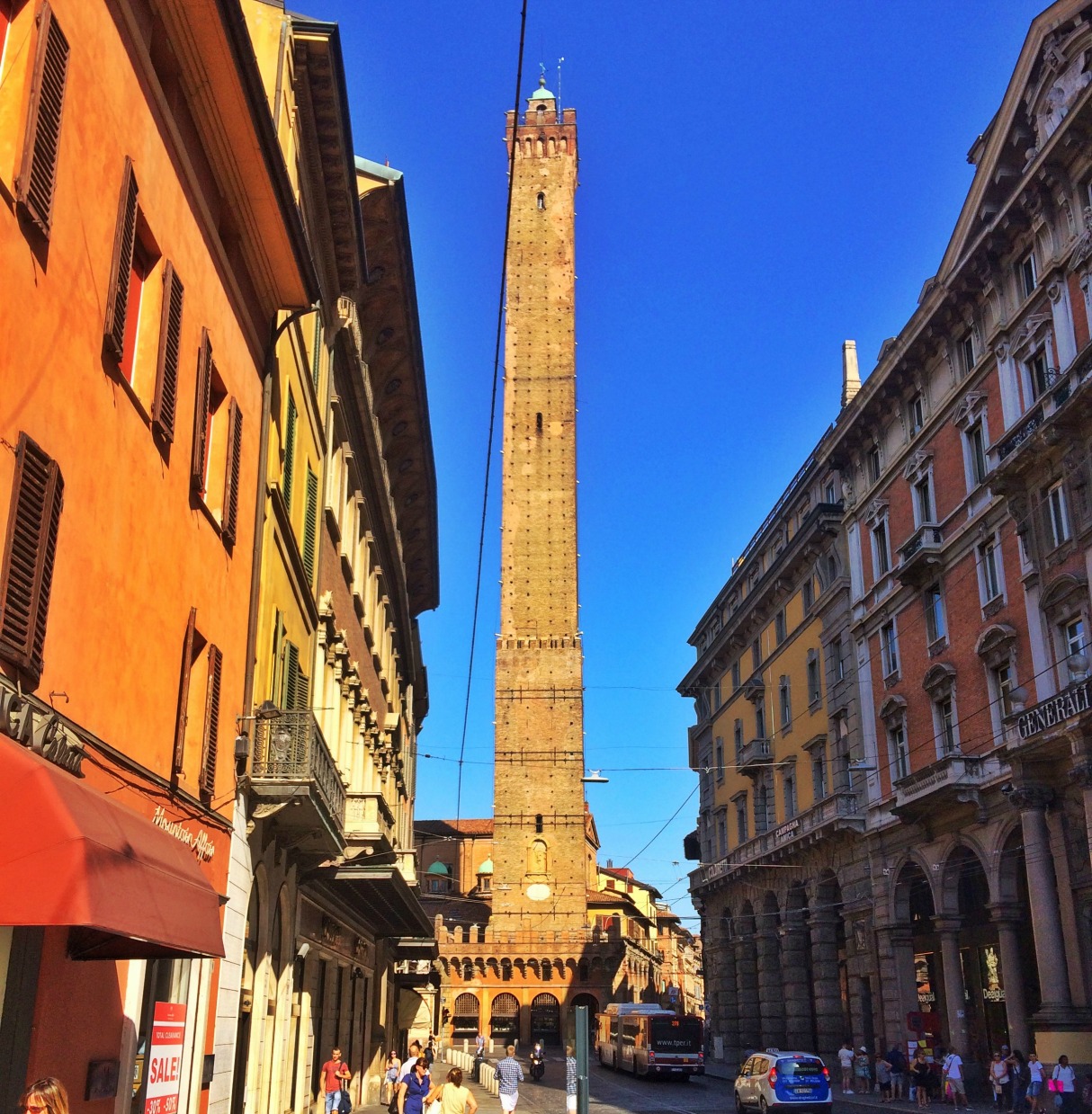 All this history means it’s a great city to simply wander. The beautifully colonnaded medieval grid is easy to navigate if you wish, but we’d suggest taking a morning to meander through the markets and stumble across the numerous Catholic Basilicas. The Basilica of San Petronio is the main church of Bologna and is the tenth-largest church in the world by volume. It dominates the city’s main Piazza Maggiore, which during the summer shows a different film each night, completely free of charge.

The main landmark in Bologna, however, is the Due Torri, or ‘Two Towers’. You can spot the bigger of the two from basically anywhere in the city, and though they were out of action for refurb while we were in the city, they’ll be open again by the time this hits the site. We’re assured the views at the top are stunning.

Also make sure you give yourself 5 minutes to find a window on the bridge on Via Piella to find ‘Little Venice’… You’ll see what we mean. 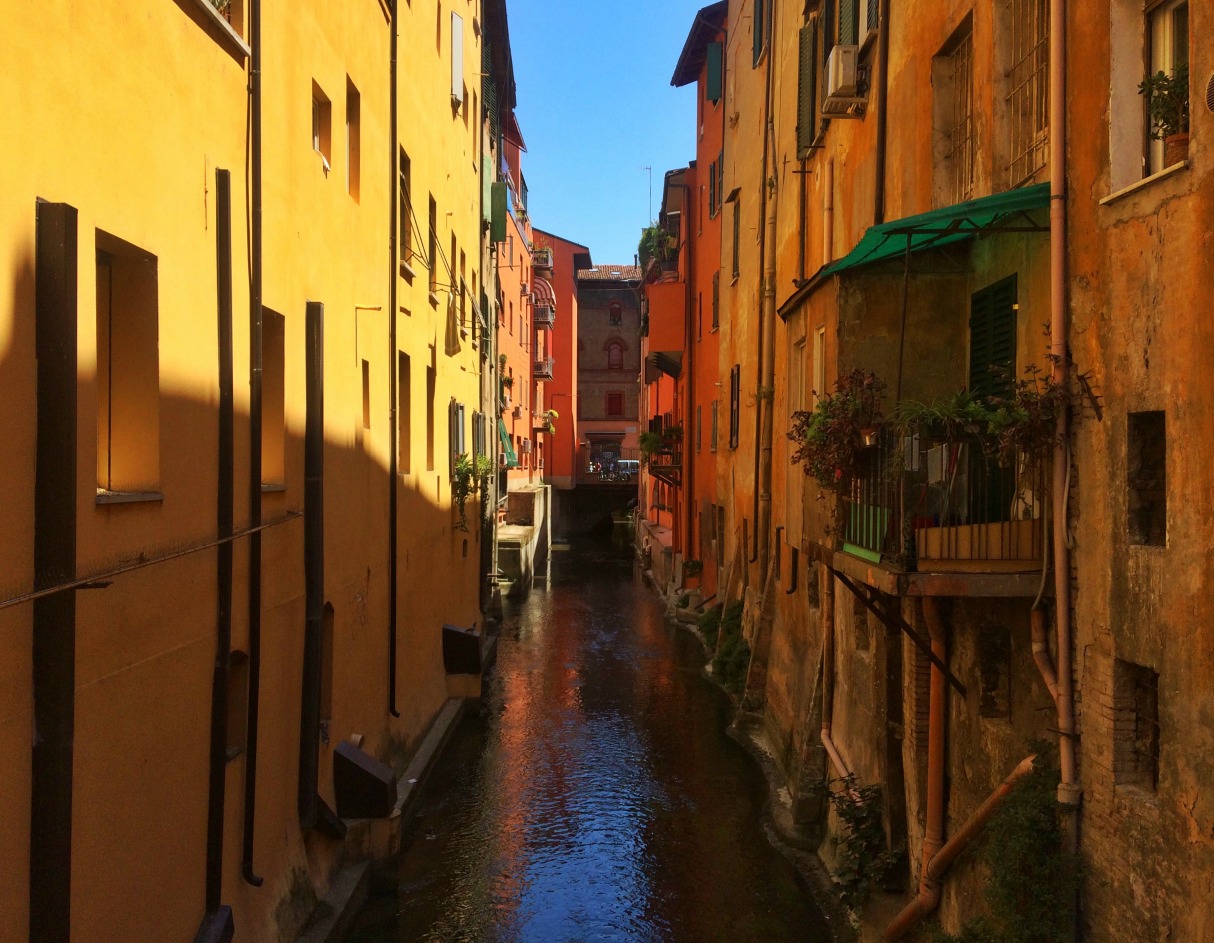 There are plenty more things to do in the city, and if you’re going to be staying in Bologna for a while, we’d recommend looking into a Bologna Welcome Card. It’s one of the best way for you to visit the city’s top attractions with free entry to the most-visited museums, as well as discounts on exhibitions and events. Prices start at €20 but it’s probably worth it if you’re into seeing your city sights.

Places to Eat in Bologna

If we didn’t make it clear enough in our intro, Bologna is a food lover’s heaven. And as it’s the food capital of Italy, by definition it’s probably one of the must visit food stops anywhere on the planet. It’s the home to tortellini pasta and is one of the best places in the world to grab Parma ham, Parmigiano cheese, and balsamic vinegar. The city runs on its cuisine culture and to be honest wherever you go to eat – and there are A LOT of options – chances are you’re going to be fully satisfied. But if you haven’t got time to be taking chances, we sampled many of Bologna’s delights – just for you!

While we’re not against high class eateries, we do think in a place like Bologna you just don’t need to be spending the money. Food is taken seriously by everyone in this city with the cheap eats offerings just as much flavour and skill as the pricier restaurants. As such, our pick of the bunch during our time was Osteria dell’Orsa. Located in the bustling student side of town and popular with locals, ‘The Bear’ as it’s lovingly called is famed for its warm atmosphere and hearty Italian staples, including the best traditional Bolognese ragù we had all week. Oh, and that’s with tagliatelle ABSOLUTELY NOT spaghetti. It’s not huge, but if you don’t mind being sat on a table with strangers, it’s the best value restaurant we dined in in Bologna and is perfect if you want some authenticity. 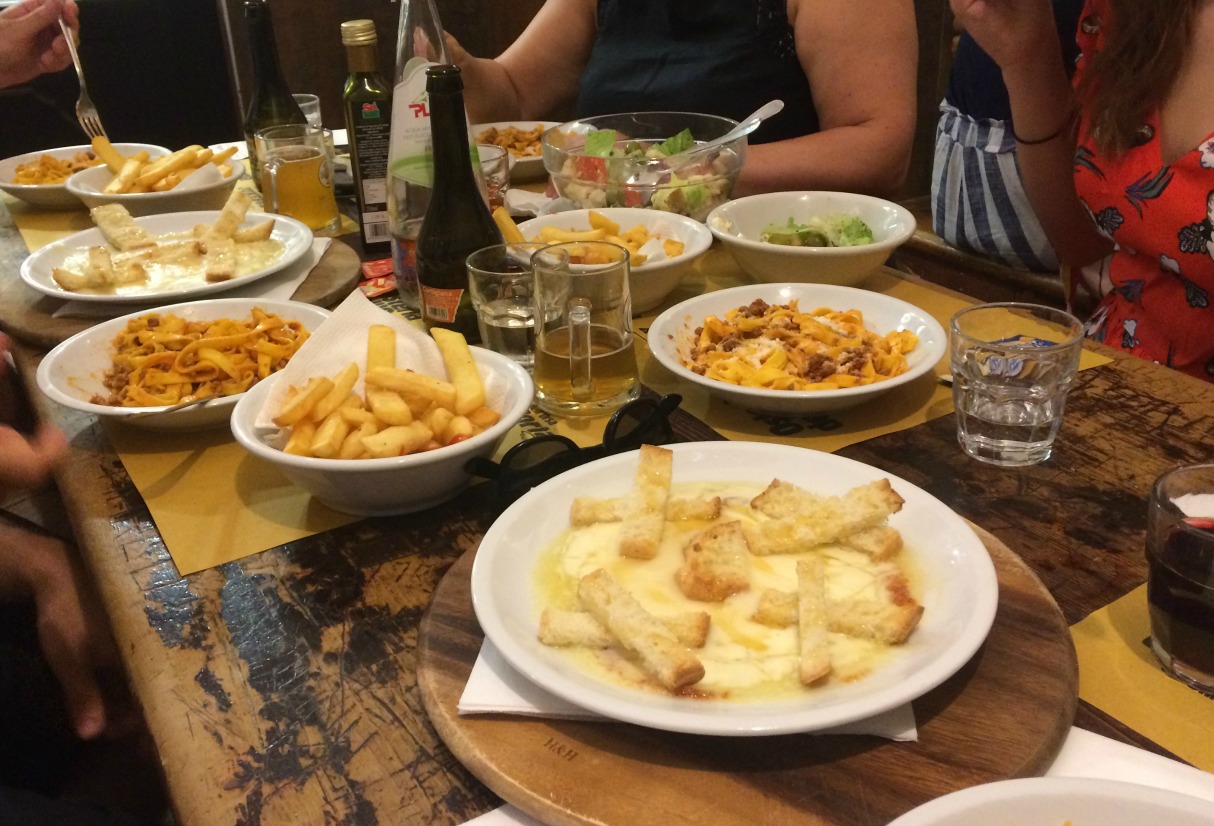 Other good restaurants include Trattoria Anna Maria, Osteria Marsalino, and Osteria de’Poeti – all of which serve up your Italian classics, with the latter being a favourite among tourists and locals thanks to its live jazz at the weekends.

If you want a good pizza – this is Italy after all – we’d recommend Ranzani13 for some craft beer alongside your slice, or Spacca Napoli, which is famed for serving up the biggest pizzas in Bologna. We’re talking size of a small child stuff! 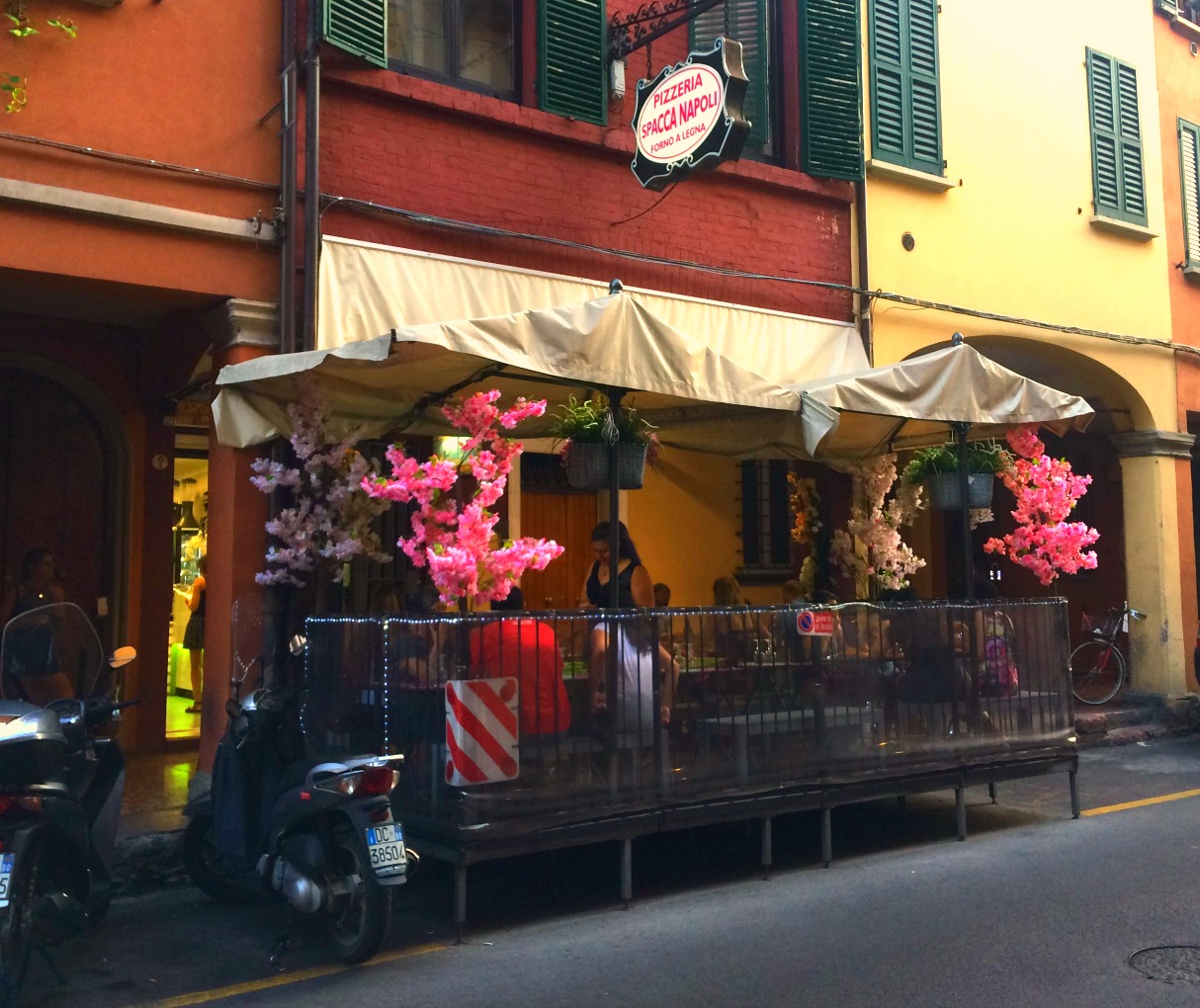 If you looking for a small bite to eat in the evening or even during the day for that matter, then you have to get down to a bar or eatery and partake in what the Italians call aperitivo. Generally but not exclusively served between 7-9pm, aperitivo simply involves sitting at an establishment with a drink, watching the world go by, while tucking into some snacks. It’s served pretty much everywhere and is sometimes even on the house, though drinks can be a little more expensive.

Others cuisine places of note include Il Quadrilatero, a set of side street markets famed for their incredible produce; La Prosciutteria on Via Guglielmo Oberdan, a place where you can sample all the great produce on one board for either €5, €10 or €15 per person; and finally, Mercato delle Erbe, a covered market in the city centre where you can grab fruit and veg, meat, cheese, wine and everything else in between. It also has dining halls either side of it and we’d fully recommend heading down for lunch! 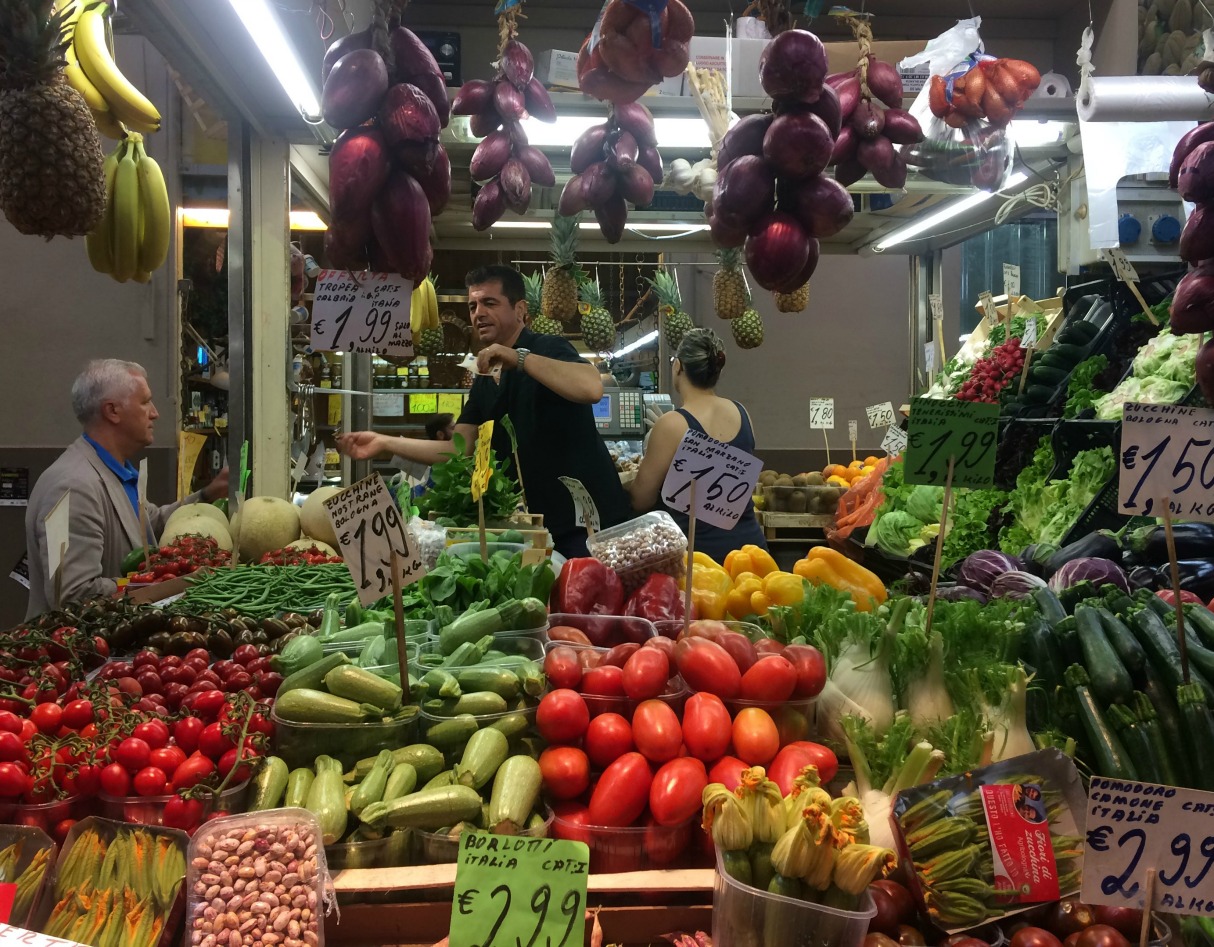 Places to Drink in Bologna

Like all well sized European cities, there are no lack of drinking haunts in Bologna either with the city centre and its side streets packed with café bars. As mentioned earlier, kick back in one of them with an Aperol Spritz and some aperitivo. Or if you’re looking for a bit more of a party vibe, anywhere on Via Zamboni will be filled with university students.

Our pick of the drinking establishments in Bologna, however, is undoubtedly Osteria del Sole. Located just off the Quadrilatero, del Sole is the ‘oldest pub’ in Bologna having been knocking around since 1465. You’d barely notice it if you were to walk past it with its plain white entrance simply stating it sells ‘Vino’. Walk in and you’re met with locals tucking into their cold cuts and cheeses from the market, and a bar which serves everything from one of their three industrial cool-boxes. It’s stripped down, charming, and incredibly cheap with a glass of virtually any wine setting you back between €2-3 and a bottle a decent beer setting you back €2.5. Night or day, this place is bustling and has an atmosphere like no other place we visited. Make sure you take in your own food! 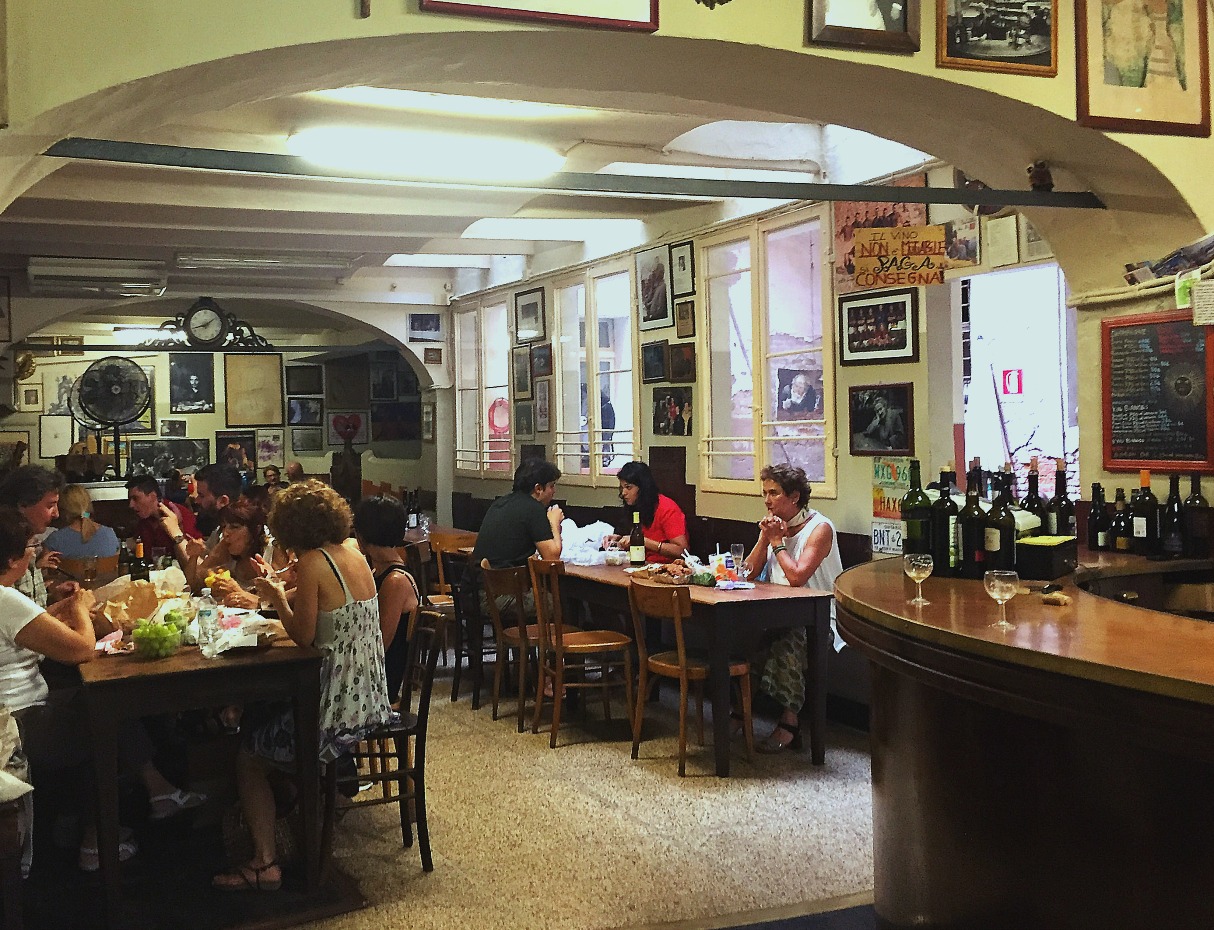 We’d also recommend checking out Le Stanze, a former chapel-turned-bar which needs to be seen; Camera A Sud, a chilled side street bar on the Uni side of town which is perfect for a late night wind down; and if you’re into your craft beer, either Astral Beers Pub, Birra Cerqua, or Harvest Pub are good bets. The latter may be a bit outside the centre but it’s worth the trip. 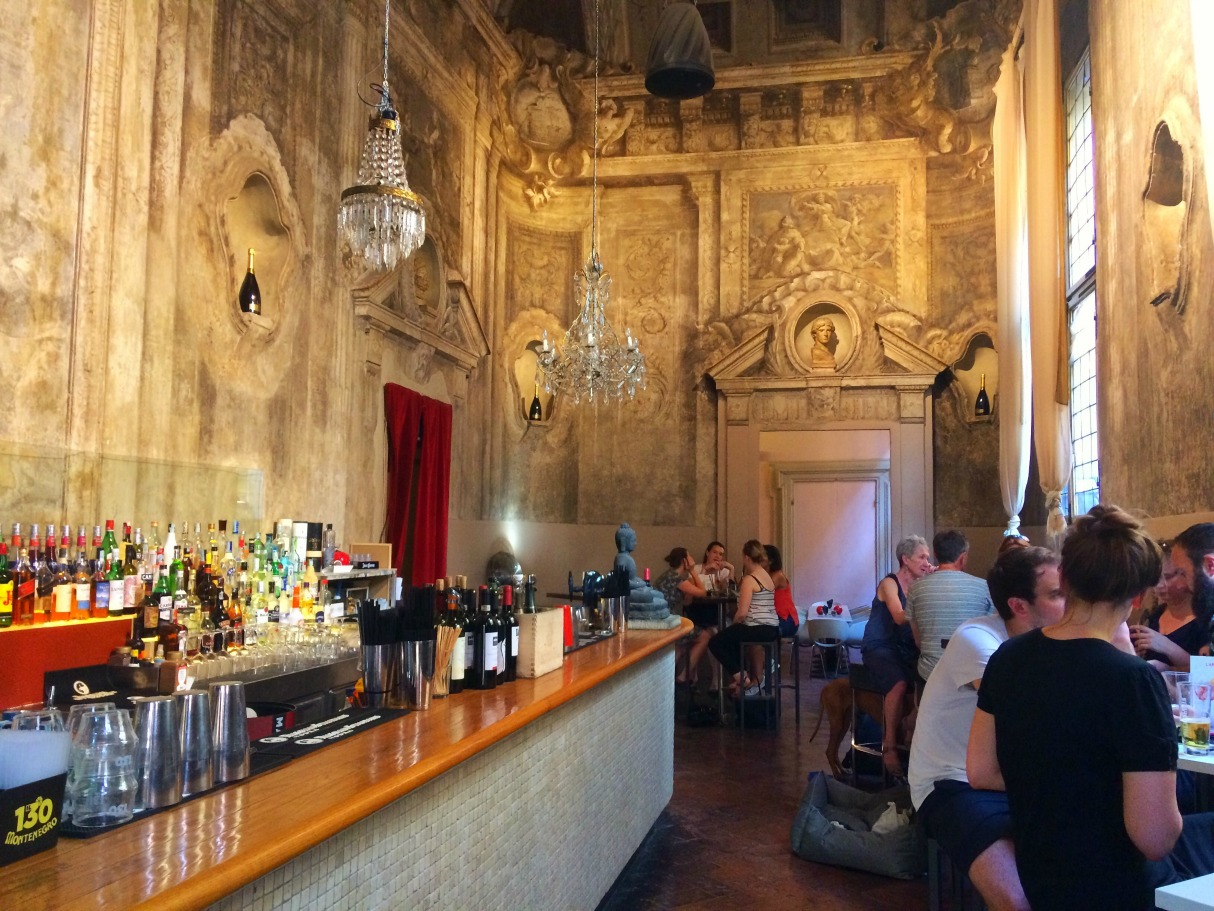 One of the great things about Bologna is its location in Emilia-Romagna and its relative proximity to other fantastic cities. One city you’re almost certainly going to want to check out is the drop-dead gorgeous city of Florence. It’s just over an hour by car, but you can get a cheap train if you book in advance and it takes just half the time. Naturally there’s plenty to do in Florence, we’d probably just suggest avoiding weekends as the crowds can get on your nerves.

The closest city to Bologna, however, is Modena. Quieter than Bologna but no less attractive, Modena is small in size but packs a big reputation thanks to its connections to Ferrari, balsamic vinegar making, and being home to the ‘World’s Best Restaurant’, Massimo Bottura’s Osteria Francescana. While we would love to say the 3-Star Michelin restaurant is for everyone, we’ve unfortunately not yet had the pleasure. We can, however, recommend the Enzo Ferrari Museum and Villa San Donnino, a balsamic vinegar house where you can do some serious tasting. 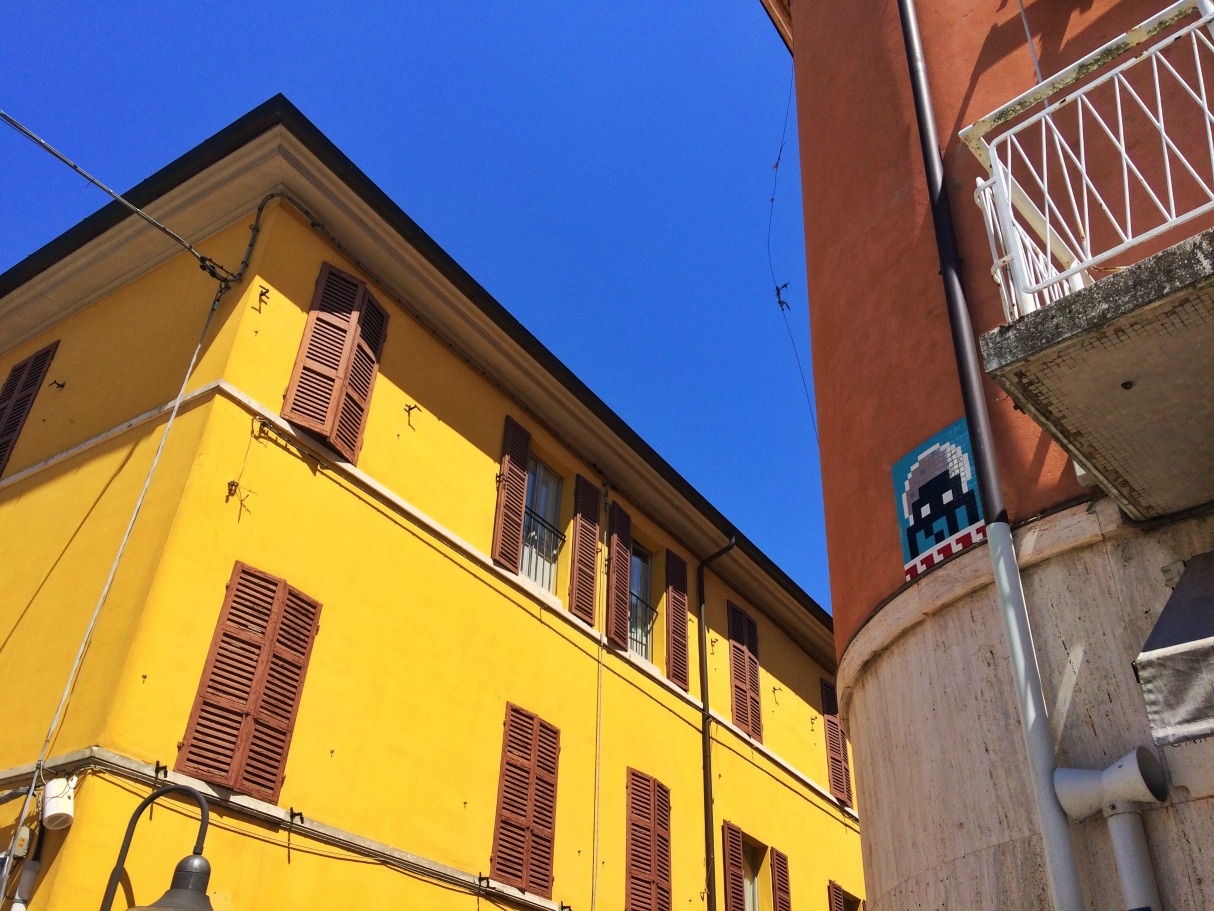 The coast is also around an hour away by car to the East and we can’t recommend enough checking out Ravenna. Known for the colourful mosaics in many of its central buildings, Ravenna is ideal if you want an amble with some truly stunning Italian architecture. The Basilica San Vitale, covered from floor to ceiling in 5th and 6th century mosaics, is a must visit. The city is also home to 18 Space Invader mosaics doted around the city by famed street artist Invader which makes for a great excuse to wander.

But the best excursion we can suggest is to head to one of Emilia-Romagna’s numerous Parmigiano Reggiano cheese dairies. While you can book tours from virtually every city in the region, they can be expensive. So we took a tip off and headed direct to Consorzio Produttori Latte on Via Puppiola, a producer just outside Parma, to try our luck. Open between 8am-12.30pm and 3-7pm, you might think it looks closed when you drive up. But as soon as you walk into the deli you know you’re in luck. We just asked the kind man behind the counter if we could have a look inside the factory. He was more than happy to tour us around and show us the store room packed with wheels of delicious cheese. He then took us back to the deli for some parmigiano tasting – all free of charge. Naturally we spent a bundle on cheese but it was a great experience. 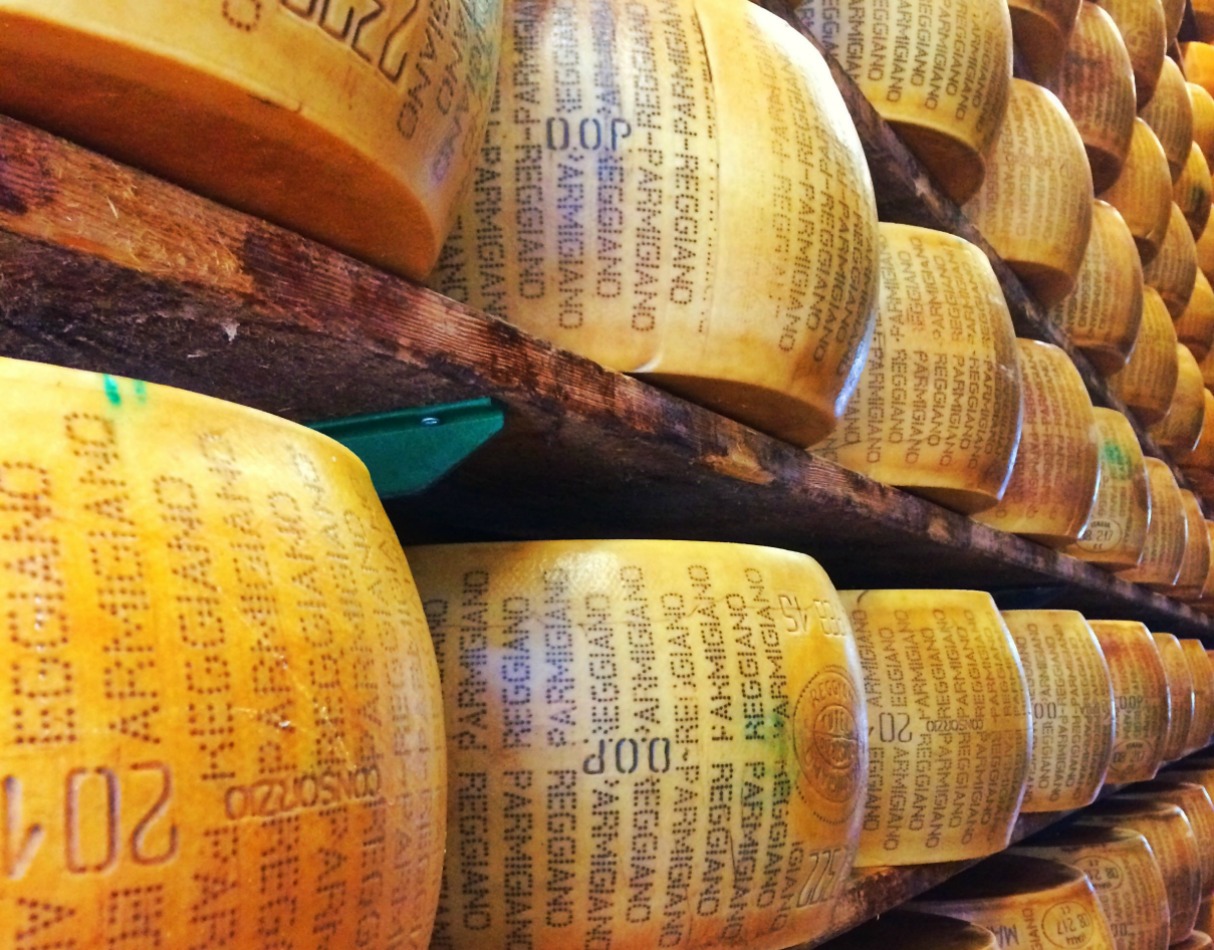 Other cities nearby worth a visit include Ferrara, a charming small city packed with Renaissance architecture; and Venice, who’s waterways are also only 2 hours’ drive away.

Simply put, Bologna is a beautiful city filled with wonderful produce and great people. It lacks the crowds and size of say Florence but still provides the history and intrigue only an Italian city can. Sample the food, walk the colonnades and drink with the friendly locals. We can’t recommend a weekend away in The Fat One enough. Grazie mille. 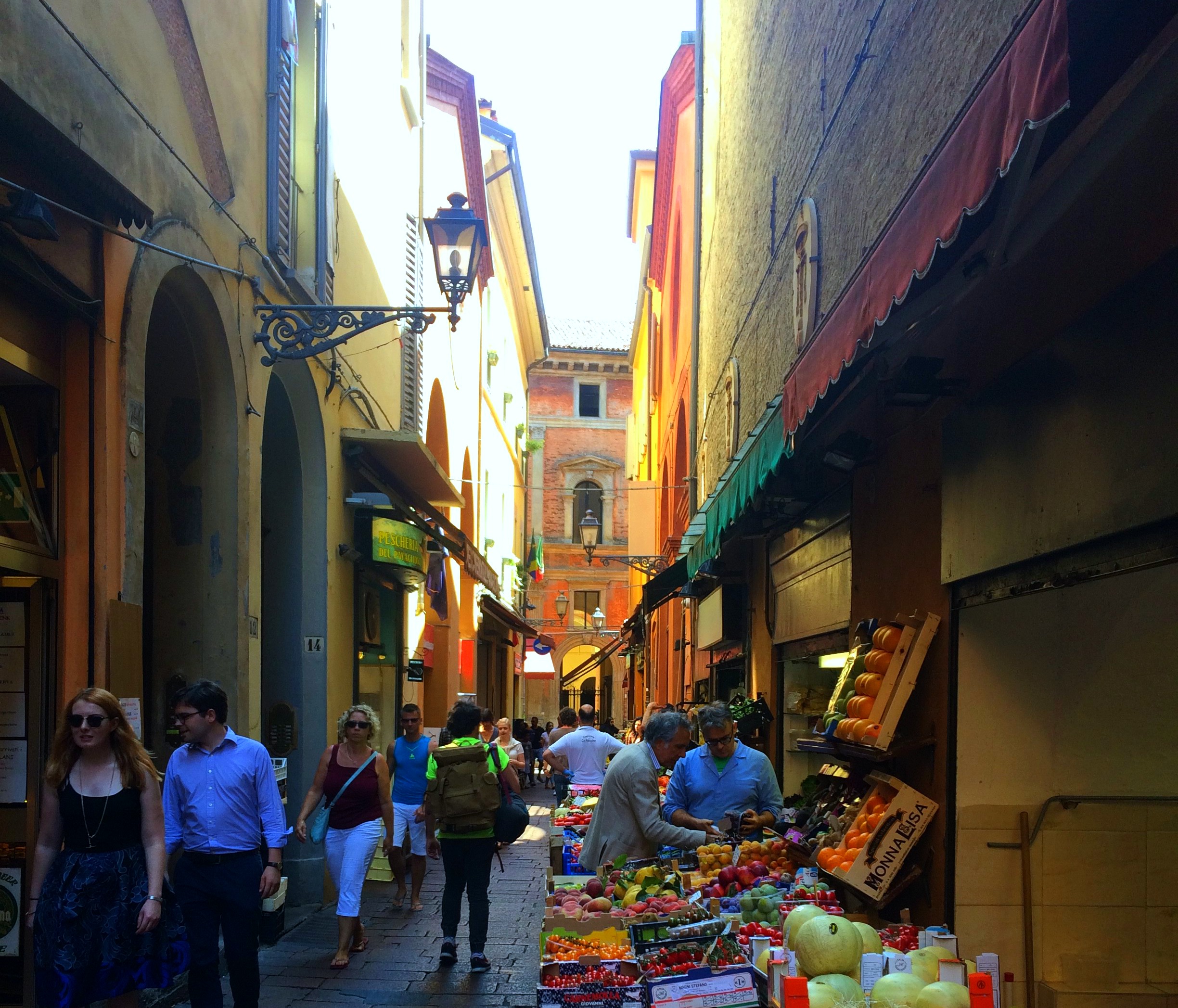 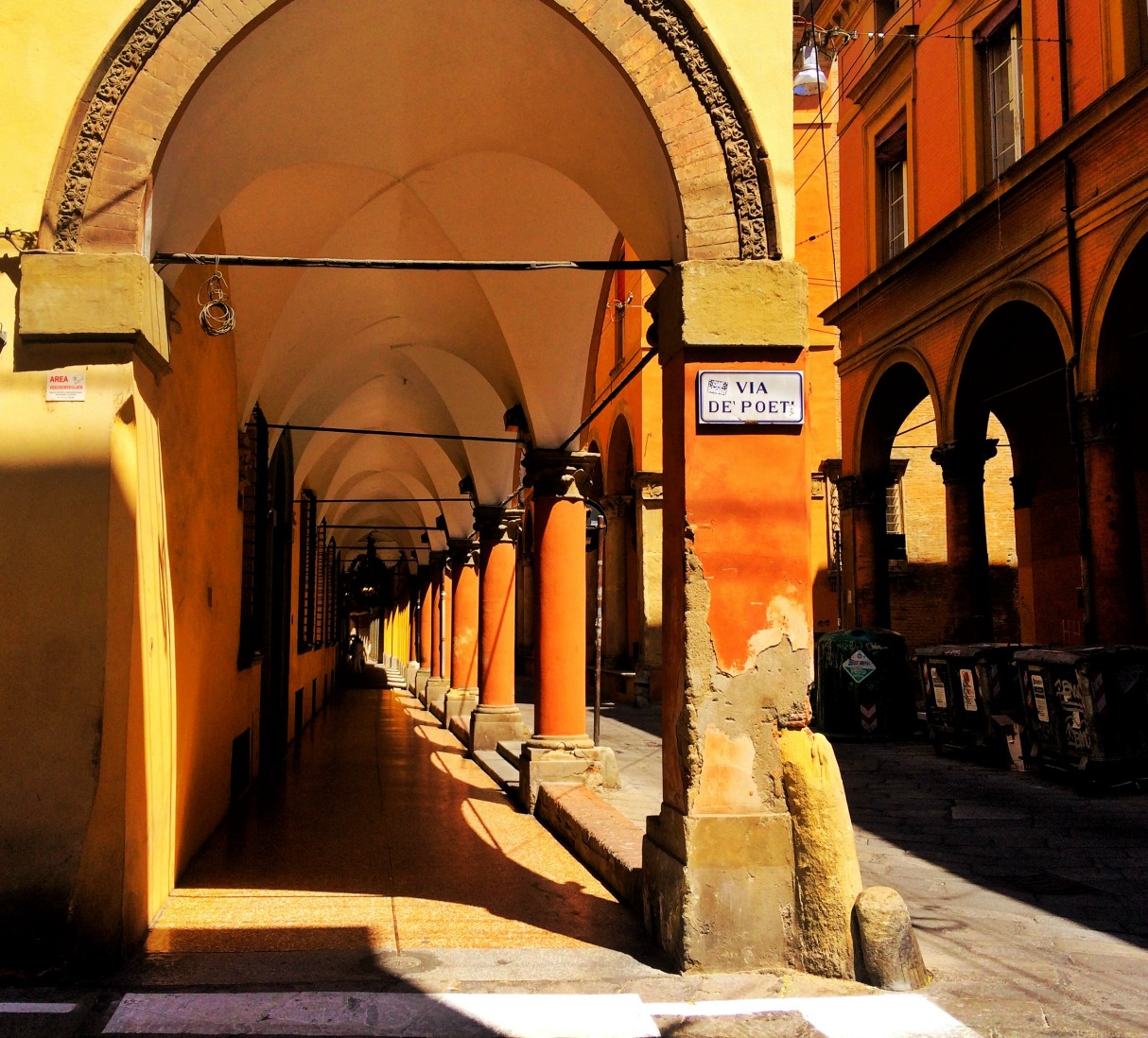