While trains may have a reputation for attracting anoraks, we don’t think there’s a mode of transport more suited to the romanticism of travelling abroad – particularly if you’re heading cross-country. And even you don’t get excited by trains, we’d bet good money that you while listening to music and watching the world go by, you’ve imaged you’re being filmed for a music video. So to celebrate the wonder of train journeys, here are some of the greatest routes on earth.

No train in history has inspired as many stories about romance, murder and espionage as the Orient Express. Having first left Paris for Istanbul in 1883, the train has long evoked notions of opulence, stunning cuisine and exemplary service, as well as providing Agatha Christie with the perfect setting for her most famous Poirot novel. The train’s principal route these days is from London Victoria to Venice, but once a year it travels to Istanbul, following the 1883 route as closely as possible. In the UK, the train still features original CIWL carriages from the 1920s and 1930s, while in continental Europe sleeping cars and dining cars of the former Compagnie Internationale des Wagons-Lits are used. 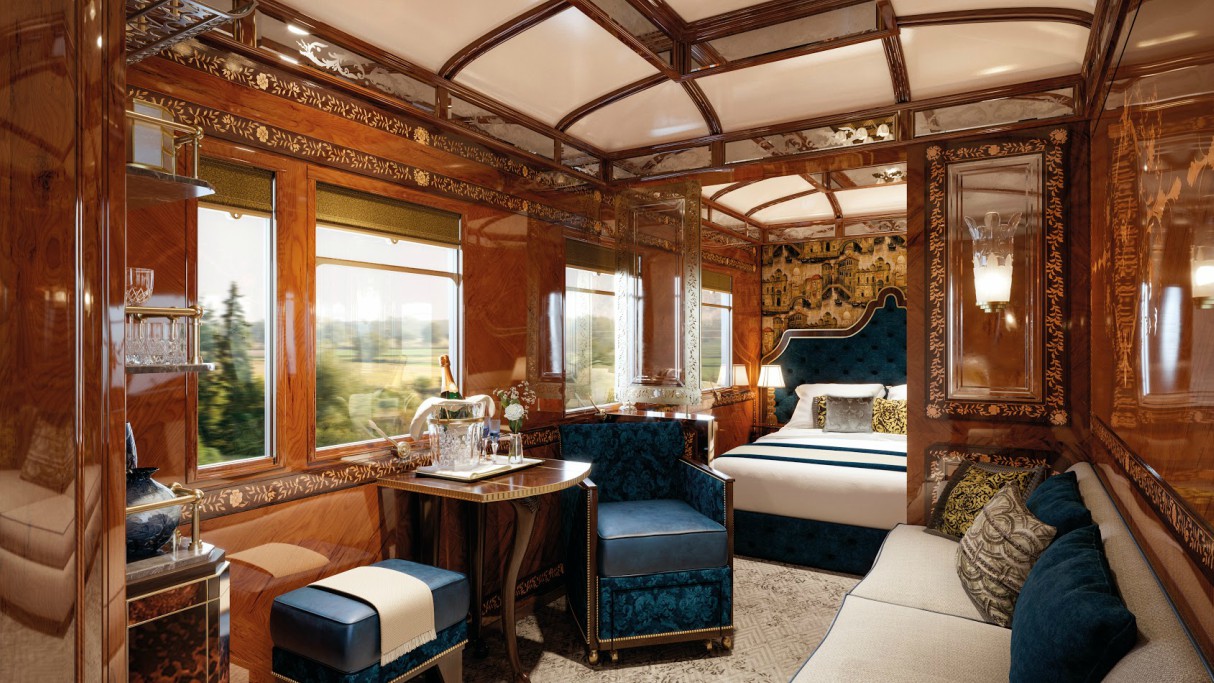 One of the true bucket-list train rides, the 5,785 miles Trans-Siberian route between Moscow and Vladivostock is undeniably one of the most epic on the planet. Taking at least a week to cover, the journey offers you the chance to immerse yourself in Russia’s stunning landscape, filled with birch trees and taiga. Many who take the journey break it up by stopping in Kazan for its 16th-century Kremlin, Yekaterinburg to glimpse at the cryptically named Church on the Blood in the Name of All Saints of the Russian Land, or Irkutsk for its stunning historic building and Lake Baikal. If you want to do it relative luxury, the Golden Eagle even offers you the chance to head into Mongolia. 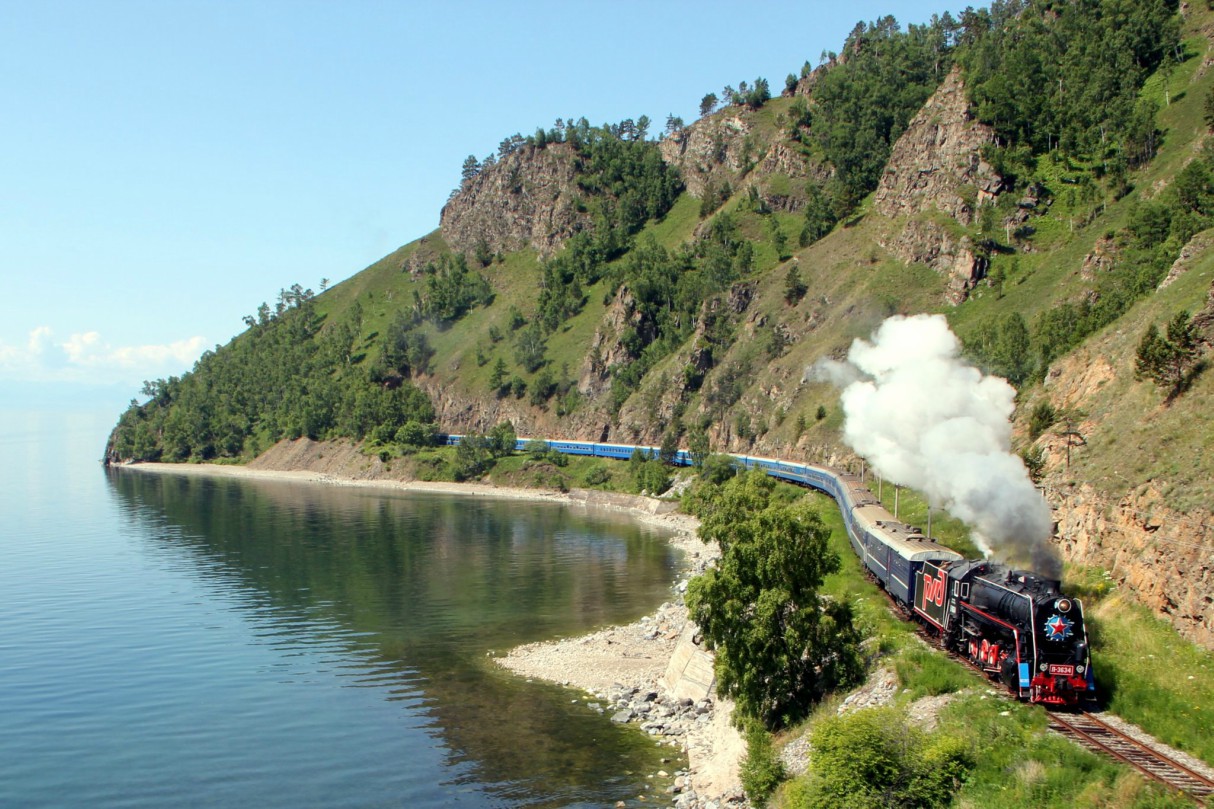 Western Canada has some of the most spectacular natural scenery on the entire planet, so a trip on the famed The Rocky Mountaineer is a must for any railway buff. Having made its first run in 1990, the train has grown to become the world’s largest privately owned luxury tourist train company. The journey between lively Vancouver and various stops in Alberta is simply breath-taking and things on board are pretty luxurious too. The train’s domed glass roof means you won’t miss any sites, and you can take a look back in time from the open-air vestibule in the last carriage. There are various routes you can take on The Rocky Mountaineer, each with their own merits. The train to Lake Louise and Banff in Alberta skirts the mountainous shores of Kinbasket Lake, before winding down the Kicking Horse River and passing Castle Mountain. 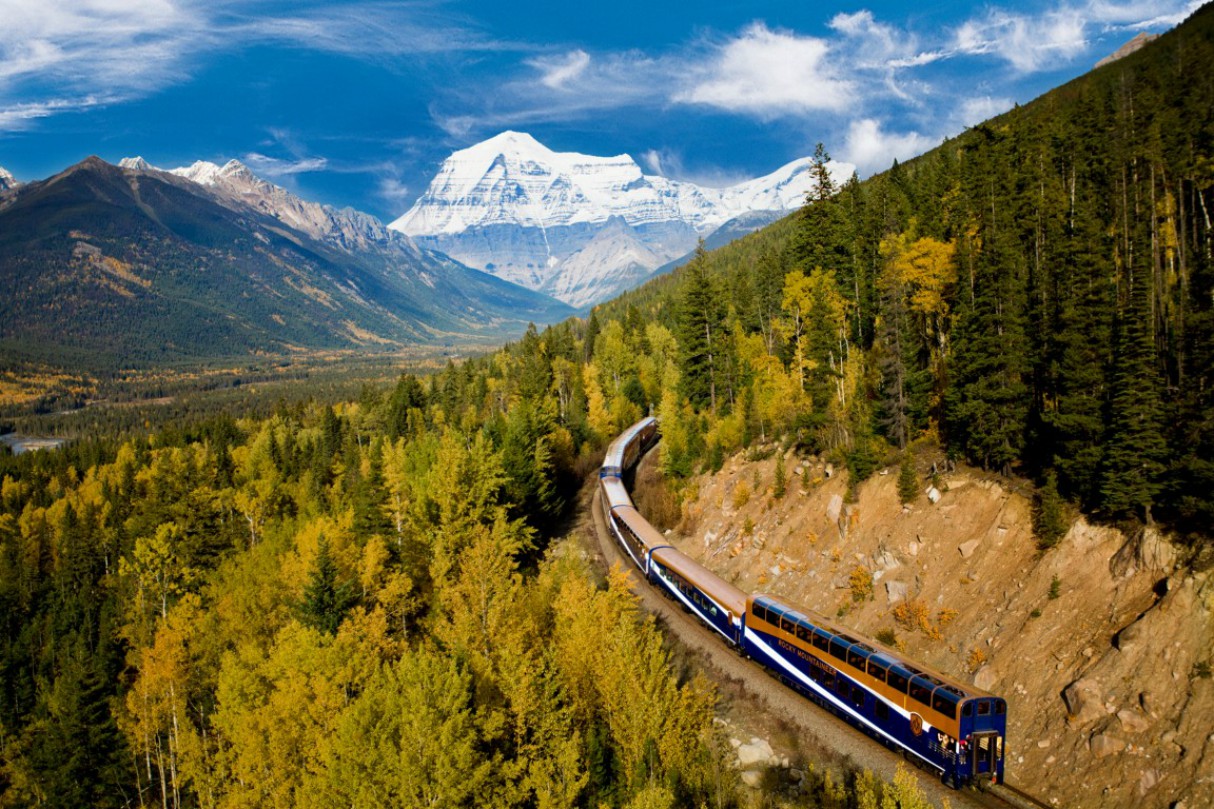 Though travelling abroad does pack a certain amount of romanticism, why head abroad when we have one of the most renowned trains around right on our doorstep? The Royal Scotsman has been running since 1985 and showcases some of Scotland’s staggering landscapes in its full glory. The Scotsman runs various routes, some of which stick to the Highlands and Lochs of Scotland, while some venture south of the border to take in the likes of the Yorkshire Dales and even Snowdonia in Wales. But whatever the route, you and just 35 other passengers will be treated to luxury, spectacular views and world-class cuisine, rich with Scottish specialties. 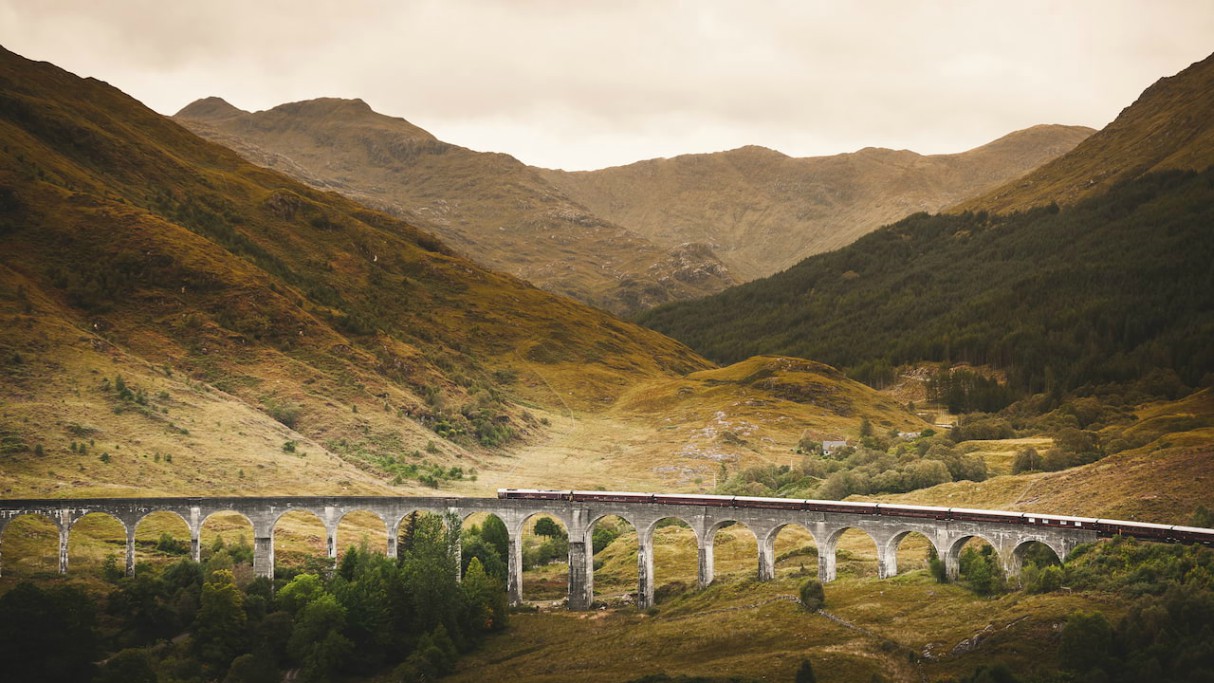 Norway’s Flåm Railway regularly features as one of the most beautiful train journeys in the world. Beginning at Myrdal Station, the train runs directly to the start of Aurlandsfjord, one of Norway’s awe-inspiring fjords. It’s the shortest journey on our list coming in at just under an hour, but it’s no less exhilarating, showcasing the very best of Western Norway’s stunning scenery. The train begins at 867m above sea level in the Myrdal Mountains before arriving in at the Sognefjord in the tiny town of Flåm. The Flåm Railway is one of the steepest standard-gauge railway lines in the world, with 80% of the journey at a gradient of 5.5%. The train runs through mountainsides, foaming waterfalls, and twenty-odd tunnels. 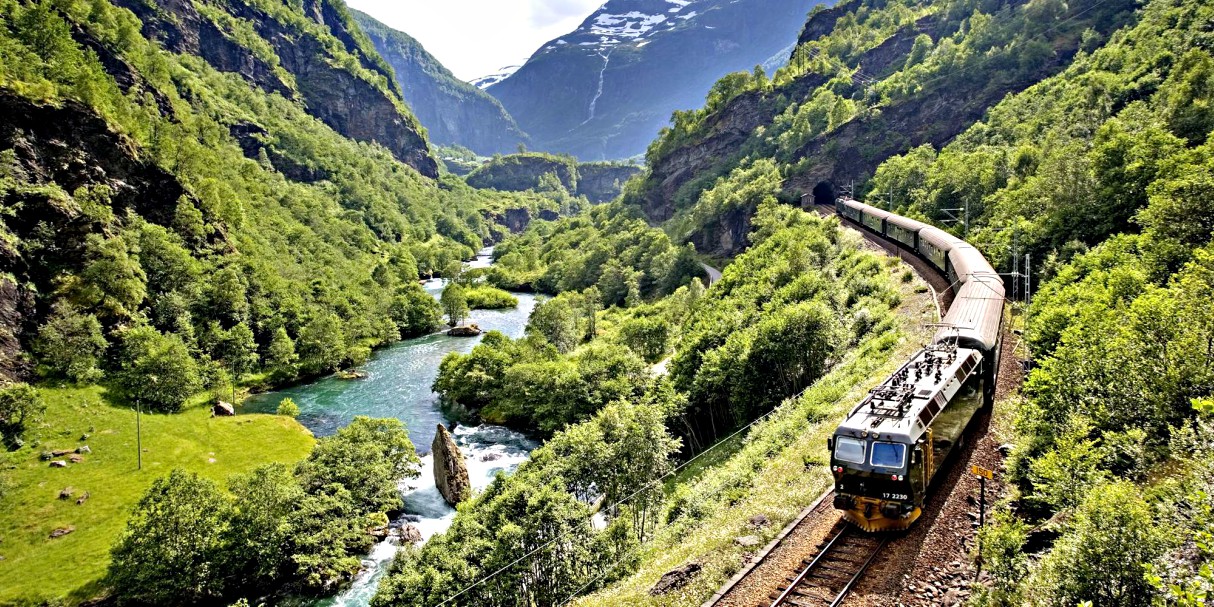 The newest journey on our list, East Japan Railway Company’s Shiki-shima train made its maiden journey this past May with tickets already sold out until March 2018. And it’s not hard to see why. More five-star hotel than locomotive, the gold-tinted Shiki-shima train features a sophisticated blend of modern and traditional Japanese materials such as washi paper screens and lavish carpets. It was designed by famed industrial designer Ken Kiyoyuki Okuyama, and while the private rooms ooze sophistication, it’s the train’s amazing greenhouse-like observatory coaches that really sets it apart. Glass ceilings and walls are built into two of the carriages at the front and rear of the train, which means passengers can watch the scenery pass by. The train boasts just 17 tatami-style suites and an opulent dining carriage where guests can order fine cuisine prepared by an on-board Michelin-starred chef. Naturally, there’s also a concierge and butler serving your every need. 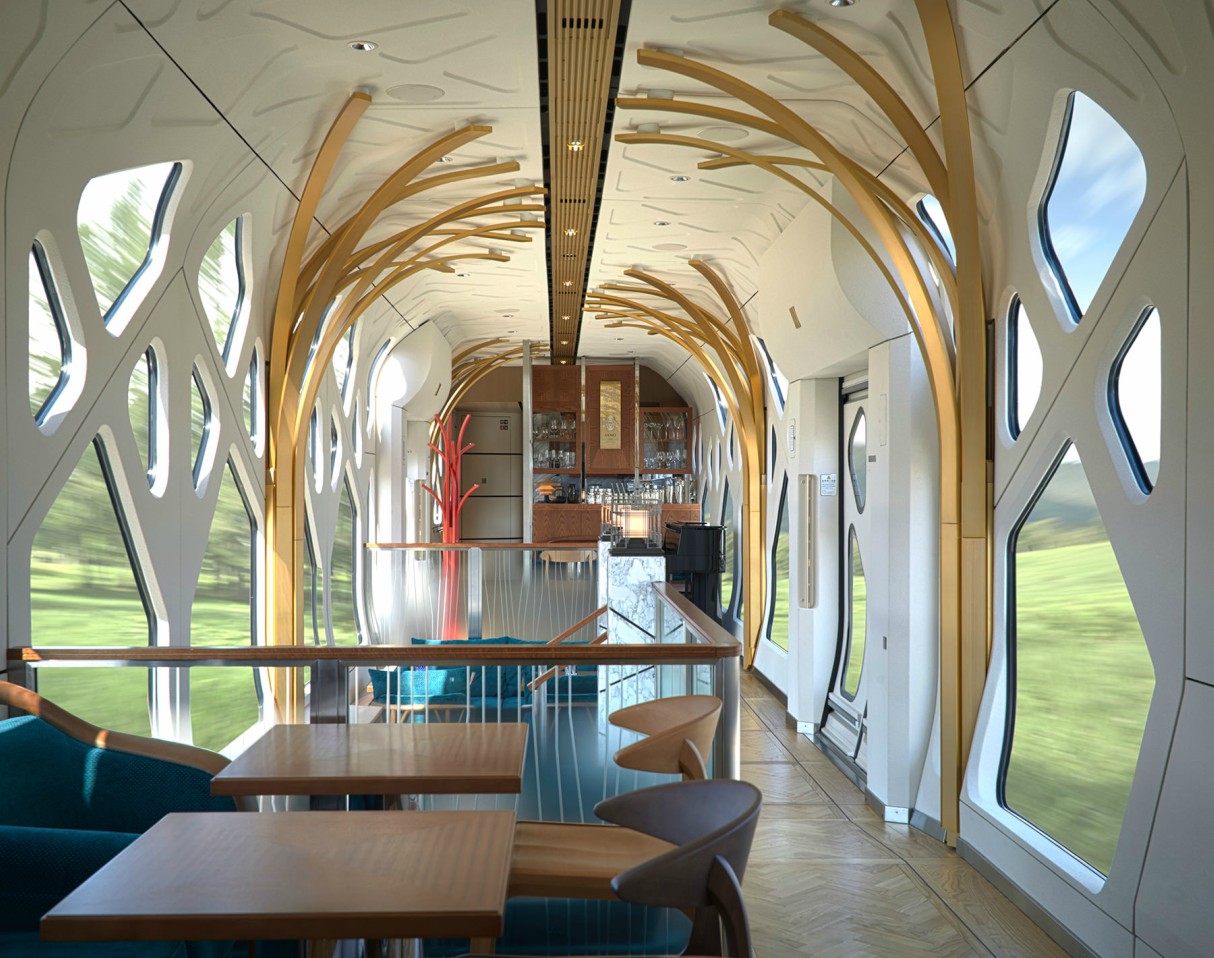 India is famed for its railways and without doubt its most luxurious experience comes on the Maharajas’ Express. Showers of petals are part of the welcome on this 23-coach hotel train before it meanders around usually north-western India on five different 4–8-day routes. The spacious en-suite cabins are placed alongside opulent lounge and dining cars, serving up some of the best food you’ll find in the country. Journeys begin in Mumbai or Delhi, before heading to various destinations. Off-train excursions are usually a big part of the experience, with stops at the likes of the Taj Mahal and the upmarket cities of Jaipur and Udaipur not uncommon. 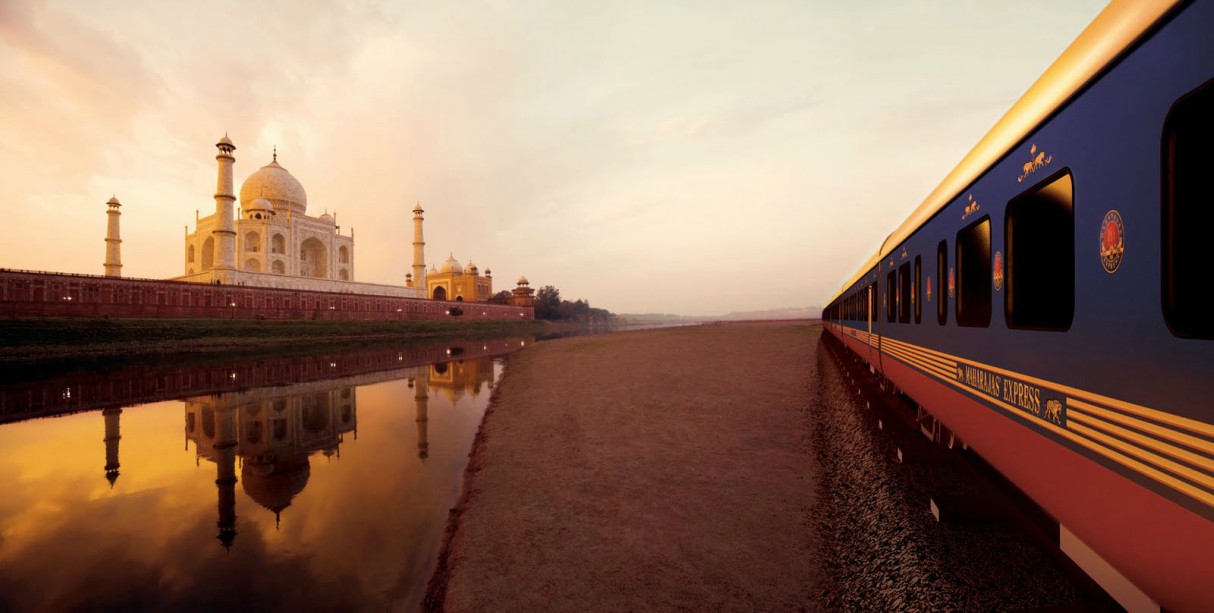 If you’re inspired to head to India, check out the 7 Indian cities we think you have to visit!