In this post-pandemic world, going abroad is probably not something many of us will be doing for a while. Holidays here in the UK will become the new norm for those wanting to get away. So we want to make the case for our home county. The beautiful coastal county of Norfolk.

Norfolk is a part of the UK that attracts people from all walks of life, up and down the country with its spectacular beaches, countryside, harbours and coastal towns. It is a part of the country that I have been lucky enough to grow up in and have spent many days wandering it’s beaches. Being a younger local in the area, I never used to appreciate Norfolk for the stunning area it is and it was only when I went away to University that I realised the beauty of the place that I lived in. Norfolk is an area that I think everyone should be able to enjoy at least once in their life.

The Norfolk coast harbours beautiful coastal towns, each one bringing its own unique community and way of life. My home town of Heacham brings a slower pace of life and a sense of community. It’s a town where everyone knows everyone and the tourists are welcomed into the area through the pubs, beaches and caravan sites! The smaller town allows everyone to enjoy the nature of the Norfolk coast a little more without the busy crowds of the summer! Heacham is a spot where I often go paddleboarding! The prom allows for an easy launchand you can go around to Hunstanton and paddle around the cliffs with ease! It’s a stunning paddle out! The prom also connects to Hunstanton allowing you to go from a calmer area of the Norfolk coast to the hustle and bustle of the sea front of Hunstanton.

One of the first coastal towns I ever visited living in Norfolk was Hunstanton, one of the main seaside villages that brings in thousands of tourists each year! Hunstanton holds many attractions ranging from nature’s side, such as the famous red and white cliffs, to man-made attractions, such as the amusement park and the arcade! One of the best things about this town is that there is always something to do! Grabbing a coffee at one of the many brilliant cafes, go for a walk along the Prom or by the bottom of the cliffs at low tide and then head out for a swim or go out on the paddleboards! I loved this place growing up! It has the huge arcade that overlooks the North sea, which has a bowling alley on top of it! You can go from the arcade, down to the amusement park and going out on the rides! Even as I got older, I could never turn down a night in Hunstanton amusement park! I think there’s something different about being able to go on rides by the sea; all the rainbow lights, the sound of the sea, the genuine joy in people’s laughter.

Wells-Next-The-Sea is the next best known town along the coast towards Cromer, but don’t let that fool you. Along the way to Wells via the coast road, there are some small towns along the way that hold their own special soul! Thornham is the first one that comes to mind. Not only does this town have a couple of beautiful family pubs and Thornham Deli, which is definitely one of the best places around here for a hot chocolate, but the town holds a beautiful little harbour. Thornham harbour is one of the most beautiful places in Norfolk in my opinion, because it’s a harbour that still holds a touch of nature. At first glance, this harbour seems ancient. Weathered ropes and jetties, worn fishing boats waiting for the next high tide; a beautiful scene within itself. The whole harbour is brimming with a character that cannot be beaten. The coal house adds an extra touch of history to this area, which upon further research, used to be a place for smugglers along the Norfolk coastline. I sometimes go here to just sit alone and watch the tide come and go, though definitely not when its high tide as this post is infamous for flooding the car park and turning parked cars into boats.

Wells as mentioned, it is definitely the next best known spot after Hunstanton and rightly so. It is definitely one of the most beautiful towns along the Norfolk coast. The town overlooks the harbour where fishing boats come and go each morning with the tides. The granary adds a spot of contrast to the quay, which.   The quay is one of my favourite areas; watching the boats come and go, the tide rise and fall across the marsh. In summer, you can often see people crabbing here. A couple of tips if you do go crabbing though; use saltwater in the buckets, do not leave the buckets and wires along the quay and if possible buy eco-friendly crabbing kits, which you can buy in some shops in the area! Plastic does not need to go into the ocean, so seriously take it home or bin it! Wells beach is an amazing time place to go swimming or to hire out a little beach hut! The beach huts themselves add a stunning shade of rainbow as a backdrop to summer days well spent. Pinewoods is also an amazing little walk if you’ve spent your day down the beach and looking to get out of the sun. I’m often grabbing breakfast here at one of the many amazing cafes and then heading down to either the beach or to East Quay. I was lucky enough to go to high school in Wells and then continue working in that little town afterwards.  I have so many memories of coming out of high school and wandering around the town, going to the shops, grabbing snacks and then heading down to East Quay or down to the beach! One of my favourite times in Wells is when I need to be at work super early and the tide is just coming in. Hours can be spent in the seaside town and it’s highly recommended if you want a day by the Norfolk coast!

From Wells, the large majority of people might continue onto Sheringham and Cromer as these are the next coastal towns along, which tend to attract the larger summer crowds. However, just like with Wells, there are some coastal towns along the way that deserve some recognition. Last year I discovered Stiffkey. Whilst I had driven through it many times, I had never actually stopped and had a look round; I never saw the point. How wrong I was. I have absolutely fallen in love with Stiffkey and I believe that so many people would if they took the time to explore it! Stiffkey is a little safe haven that is full of nature and hidden little coves where small boats are hidden. If you walk towards Stiffkey greens, there are some beautiful boats scattered around the marshes, which make for beautiful photos. Stiffkey also has its famous Five Bridges, which take you out from the salt marshes and out to the beach and make a fun difference to an afternoon coastal walk. If you know your way around Stiffkey Saltmarsh, there are also some secret swimming hidden in between the creakes towards Wells. Furthermore, Stiffkey stores do an amazing hot chocolate, which is the best company on colder summer days. My favourite thing to do in Stiffkey is to find the wooden signpost in the middle of the footpath before the Salt Marshes and each time walk a little bit further left or right and discover new little spots! Stiffkey is definitely going to be the place I go to the most in summer!

Further down the coastal road from Stiffkey lies Salthouse. A tiny little town with a small hall and a stoney beach. It doesn’t seem like much, but maybe this is the lure of this coastal spot. I have only recently discovered Salthouse after a friend introduced me to it. I find it so peaceful here. As the beach is stone, there usually aren’t that many people around, but on some days the beach can be lined with fisherman trying their luck! It’s interesting to watch though, seeing what they reel in! Further down the beach towards Sheringham, there is a small cliff type hill, which you can walk up and sit with a coffee. Here you can enjoy a better view of the coast both in Salthouse and along the coast with the best views looking out towards Sheringham. With this little spot being quieter, it will also be a little swimming spot for me in summer after work and especially with the beach being stoney, there isn’t the annoyance of sand! What a bonus!

The Norfolk coast is beautiful and there is no doubt about it. It is a different way of life, but it is a beautiful one. Norfolk is a place that everyone should go, enjoy and relax. The smaller towns should be explored more and the independent shops of the bigger towns should be supported! 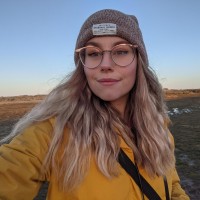