Well tonight sees Amir Khan’s toughest and possibly most defining test is Khan’s short professional career. Yes I know he was knocked out by Colombian Breidis Prescott just 2 fights ago, but taking on the legend of Barrera in the MEN Arena (where he lost to Prescott) with a possible rumoured title fight if he wins…. Now that’s pressure. 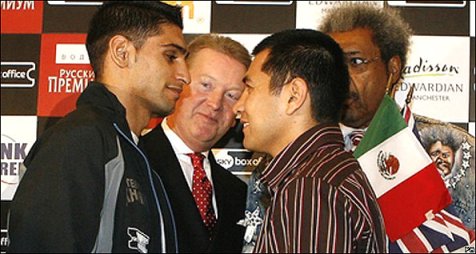 Currently Barrera is ranked the number one contender and Khan rated inside the top 10 by the WBO. The title is held by Juan Manuel Marquez, who beat Juan Diaz in March.

Over 3,000 fans attended Friday’s weigh-in at the Triangle Shopping Centre in Manchester, where Khan weighed in at 134½lb, half a pound under the lightweight limit, while Barrera came in bang on the limit after having to strip naked….. Which is strange considering Marco’s best weights were at 122 and 126lb’s.

Since Khan’s loss to Prescott last September Amir has teamed up with arguably the greatest boxing coach of our time Freddie Roach, and if anyone knows Marco Antonio Barrera it is Roach after steering Manny Pacquiao to two wins over Barrera already. Roach has commented that Khan could be as good Manny in years to come and if anyone knows what he is talking about it is Freddie.

So what will happen? With Roach in his corner Khan is my big favourite, assuming he does not rush in. He has the fitness to go 12 rounds, but if he does rush in expect another English scalp to Barrera, just like Naseem Hamed…. For me then, I am plumbing for an early scare for AMir, but the ref will stop the bout in the 5th round as Marco gets a little too tired…