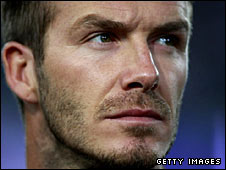 David Beckham will stay at AC Milan until the end of the season after a ‘timeshare’ deal was finally agreed between the Italian Club and the Los Angeles Galaxy.

The England star originally moved to Italy to keep up his fitness during the MLS season break in January and return in March. However Beck has played 9 Serie A games during this time and scored twice.

The 33-year-old former England captain will re-join LA Galaxy for several months, before returning to Milan at the end of the year, and after that, who knows!