Football is back, and while we know many of our fellow Joes couldn’t think of anything worse, we do love our Fantasy Premier League football. Yes, it may completely ruin games where your team is involved but it’s also going to give Burnley v Sheffield United some much needed meaning when you need Ben Mee to notch up another clean sheet. It’s also much cheaper than heading to your local bookie!

Although there’ll no doubt be some seasoned pros among our readers, there will be some Joes who have always avoided the FPL game through fear of the unknown. So for all the Joes (and Janes) who’ve decided to join their office sweepstake, this one goes out to you. Here’s a beginner’s guide to playing Fantasy Premier League 2019/2020.

The Basics of FPL

So, the basics. Each player will receive a fictional £100 million to bag yourself 2 Goalkeepers, 5 Defenders, 5 Midfielders, and 3 Forwards. You can choose any player in the Premier League from any team but you can only choose a maximum of 3 players from one club. Players vary in price, with the top players costing more than the rubbish ones… obvious, really.

You can join Public Leagues which will put you up against everyone from your country (the team you support etc…), but you can also set up a Private League for just you and your mates/work colleagues. They’re easy to set-up and you just need to send everyone the code.

You’ll receive 1 free transfer per Gameweek (meaning a round of fixtures). If you don’t use said transfer, it will roll over to the next Gameweek (the maximum amount you can have in any one Gameweek is 2 free transfers). Any extra transfers over your 1 free transfer will cost you 4 scoring points per transfer. Still with us? Good… 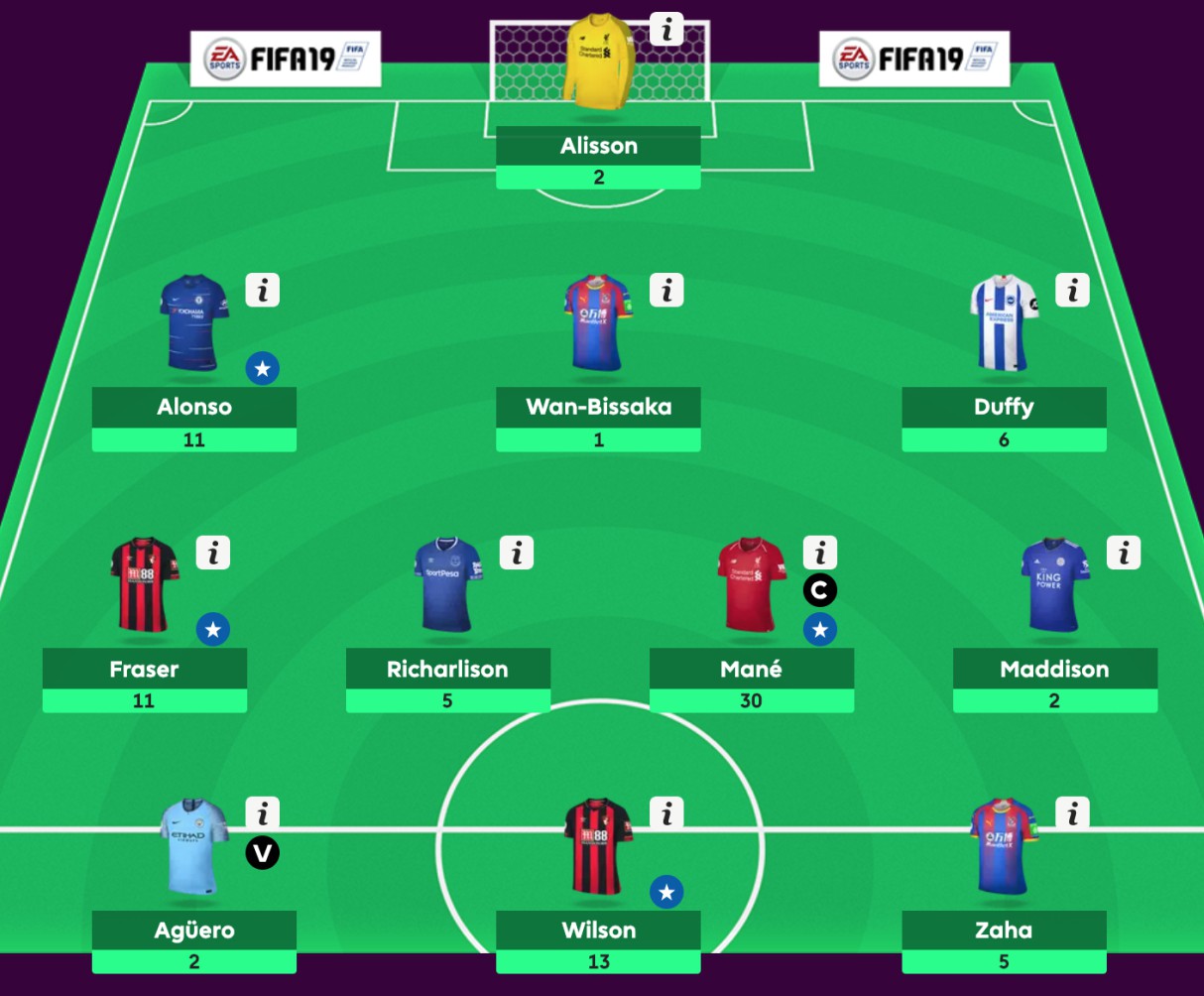 Points are given to players in your team based on how they perform in real life fixtures. You can check the complete scoring system on the website but as a rough guide; 1 point for playing -60 mins or 2 points for playing 60 mins+, 4 points per clean sheet/no goals conceded (Goalkeepers and Defenders only), 3 points per assist, and 6/5/4 points per goal scored (Defenders/Midfielders/Forwards). The best 3 players statistically in each game will also receive bonus points (1, 2, and 3 points).

Right that’s all the T&Cs sorted. Now for the fun bit. Each Gameweek, you choose 11 players out of your 15 man squad to play. This can be based on a combination of factors like who’s in form, the difficulty of their fixtures, or a dreaded hunch. But choose carefully as the players you don’t use won’t count towards your score no matter how many points they receive.

Picking a balanced squad is important. As much as we’d love it, no player can play Brighton at Home every week, so you’re going to need options. Picking a player such as Harry Kane will obviously give you a greater chance of getting points ahead of say, Josh King. But when you take into account that King is around £4.5 million cheaper, you can see how getting value for money is important. A good tip is to always check the % of teams who’ve selected a player to ensure you’re not missing a bargain – you can do that on the ‘Sorted by’ tab on the Transfers page. 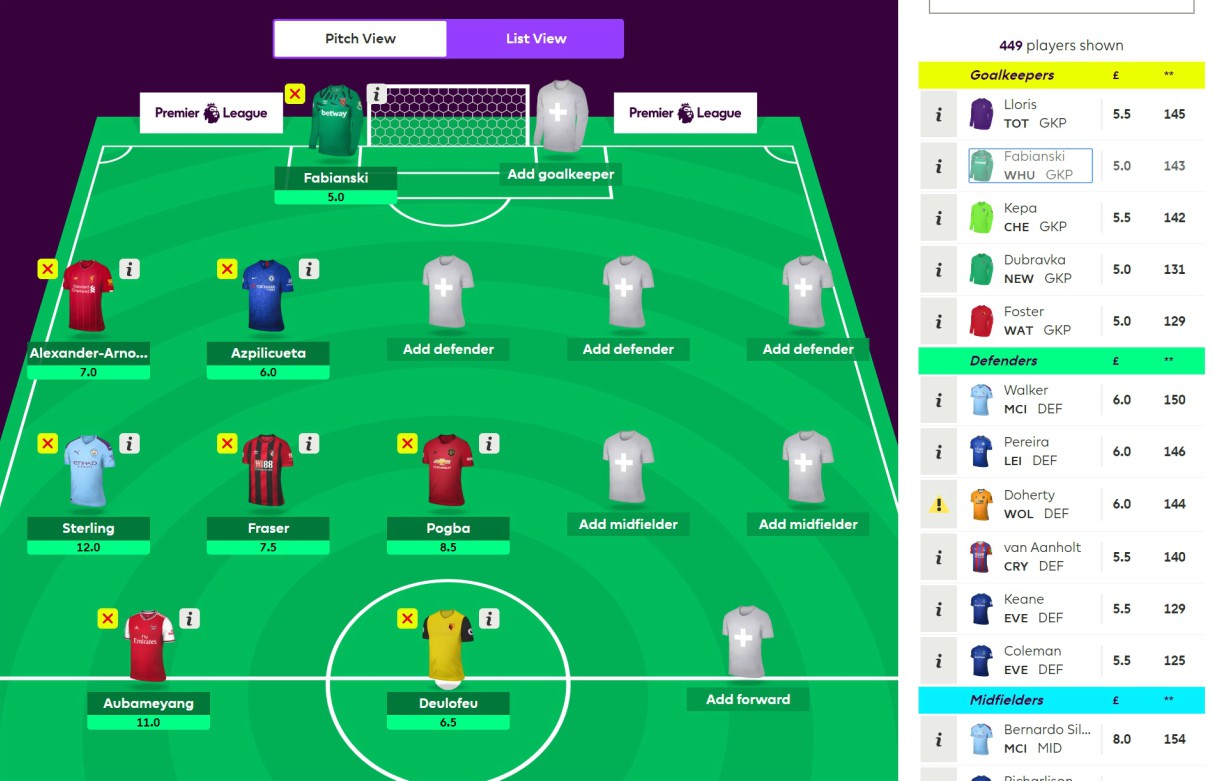 Always Look Ahead at Fixtures

This is why checking the fixtures of potential players you want in your squad is Rule No.1. Say King’s next two fixtures were Sheffield United and Brighton, both at Home, while Kane had City and Liverpool Away. There’s an argument that King is a more attractive option, without even mentioning the cost of each. Naturally, a player like Kane is important in Fantasy, but the example illustrates how important looking ahead to fixtures is.

This is especially the case when it comes to Goalkeepers/Defenders who are naturally more likely to not concede at Home to teams in the bottom half of the table. Around 60% of all clean sheets were kept at Home in the 2018/2019 season, for example. Remember; a clean sheet for a Goalkeeper/Defender is as many points as a Forward scoring. And a team managed by say Burnley’s Sean Dyche historically keeps their fair share – especially at Home. 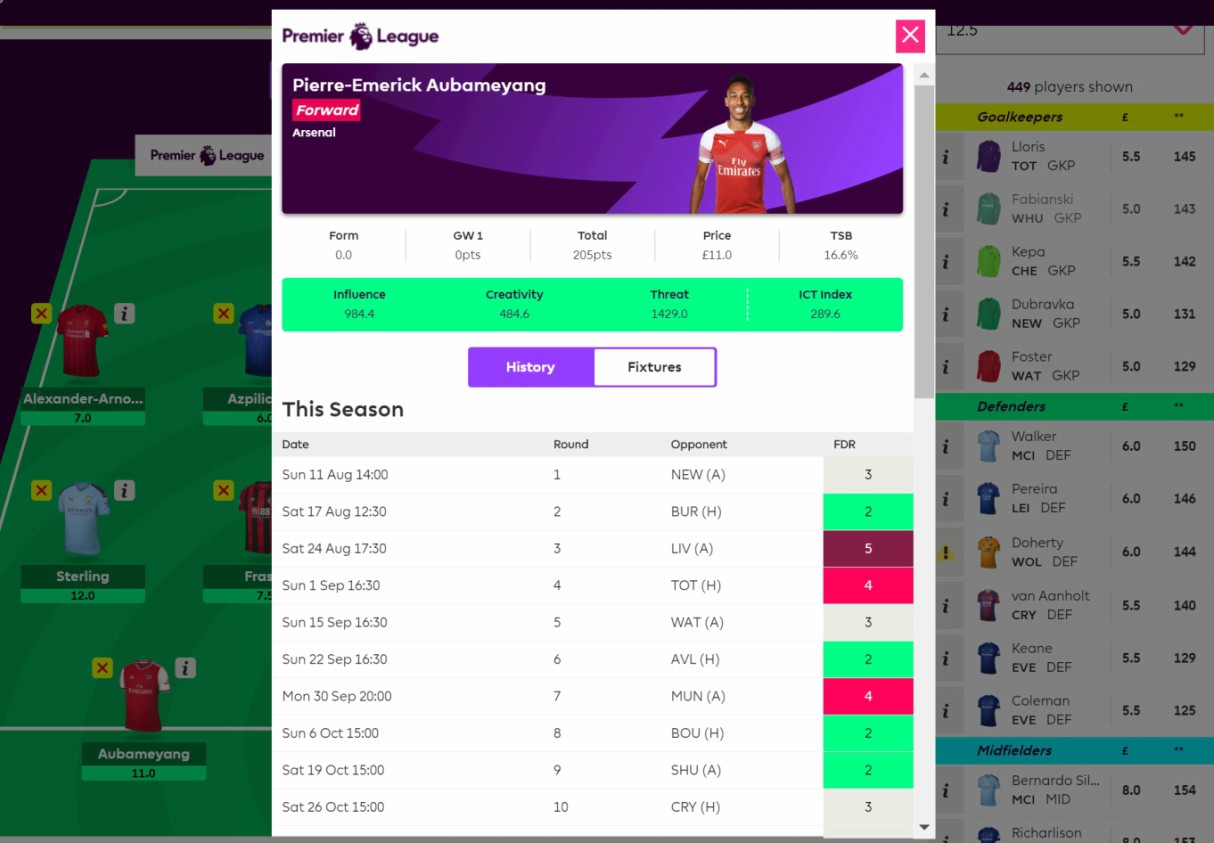 Don’t Let Club Affiliation Get in the Way

When we first started playing Fantasy, we refused to pick Cristiano Ronaldo. Partly because he’s a wally but mainly because we supported Chelsea and refused to believe he’d win United the title. That season Ronaldo notched up more points than anyone in Fantasy history (apart from Salah in 2017/2018) and we lost our fantasy league. You dig?

You should also remember that nobody knows your club like you do. And if just *know* you’re getting battered that week, don’t be afraid to Captain your opponent’s Forward. If anything, it might even soften the blow…

Chips can be used to potentially enhance your team’s performance during the season. There are four chips in total and only one chip can be played in a single Gameweek. The first chip is the Bench Boost and this means the points scored by your bench players in the next Gameweek are included in your total. This is a great one to use when fixtures look superb on paper for all of your squad.

The next is the Free Hit and we’d recommend saving this for when there are only 4-6 fixtures in a Gameweek, which usually happens around March when half of the Premier League teams are left in the FA Cup. It allows you to make unlimited free transfers for a single Gameweek. At the next deadline your squad is returned to how it was at the start of the Gameweek.

Next up is Triple Captain where your captain’s points are tripled instead of doubled in the next Gameweek. We’d strongly suggest you save this for when a top player (Salah, Kane, Sterling etc.) has two fixtures in one Gameweek against lesser teams. And lastly, and maybe most importantly, there’s your Wildcard. 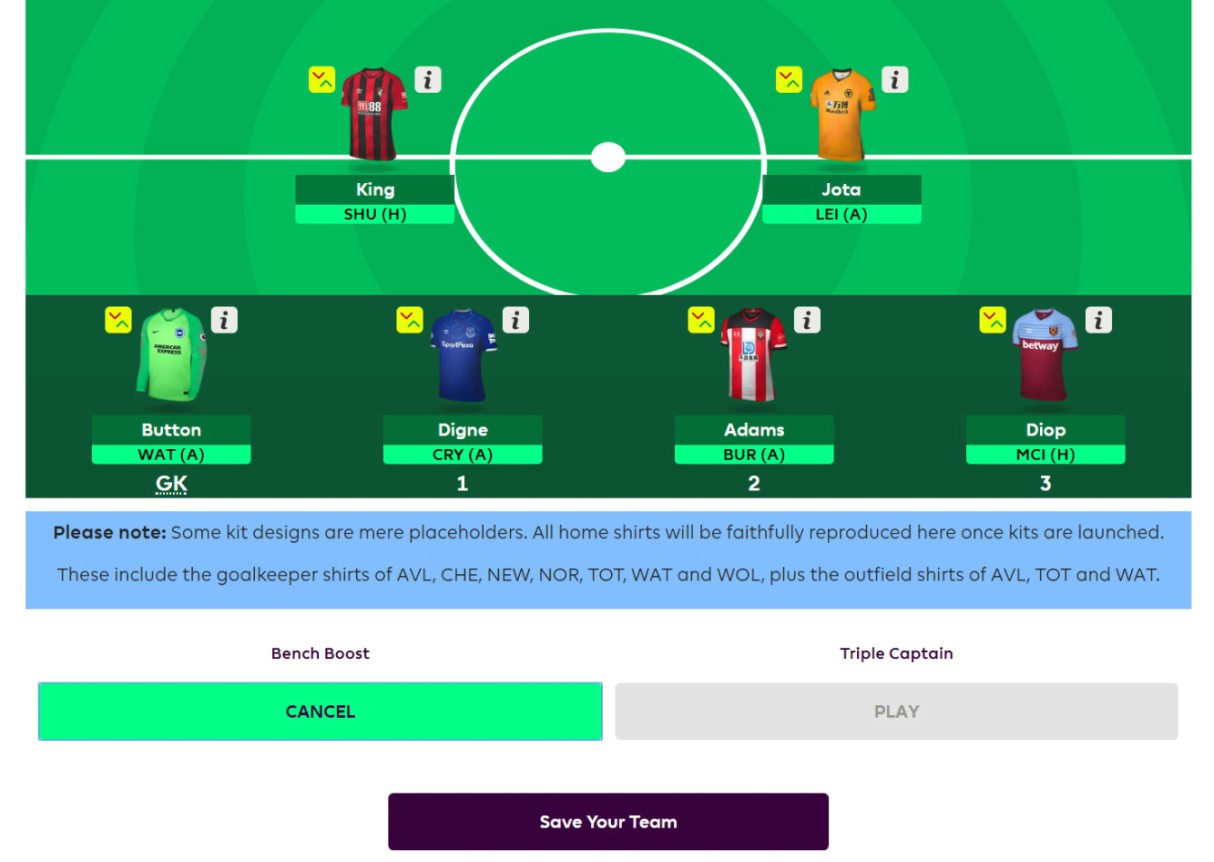 The main thing you should always remember about Fantasy is it’s a proverbial marathon and not a sprint. So if all looks lost for a couple of Gameweeks – especially at the beginning – fear not, there’s 38 Gameweeks to claw things back.

And one of the main ways you can do this is by playing your Wildcard chip. Though every transfer over your weekly 1 free transfers costs you 4 points, if you play your Wildcard, you can make as many transfers as you like in that Gameweek free of charge. We’re talking a complete overhaul of your squad if need be.

Each player gets 2 Wildcards; 1 for the first half of the season (before 28th December) and 1 for the second half of the season. That’s not many but it could save your season. Our tip; use your Wildcard within the first five Gameweeks or so when you can start to see line-ups and form teams/players. That is unless you’re your league, of course! 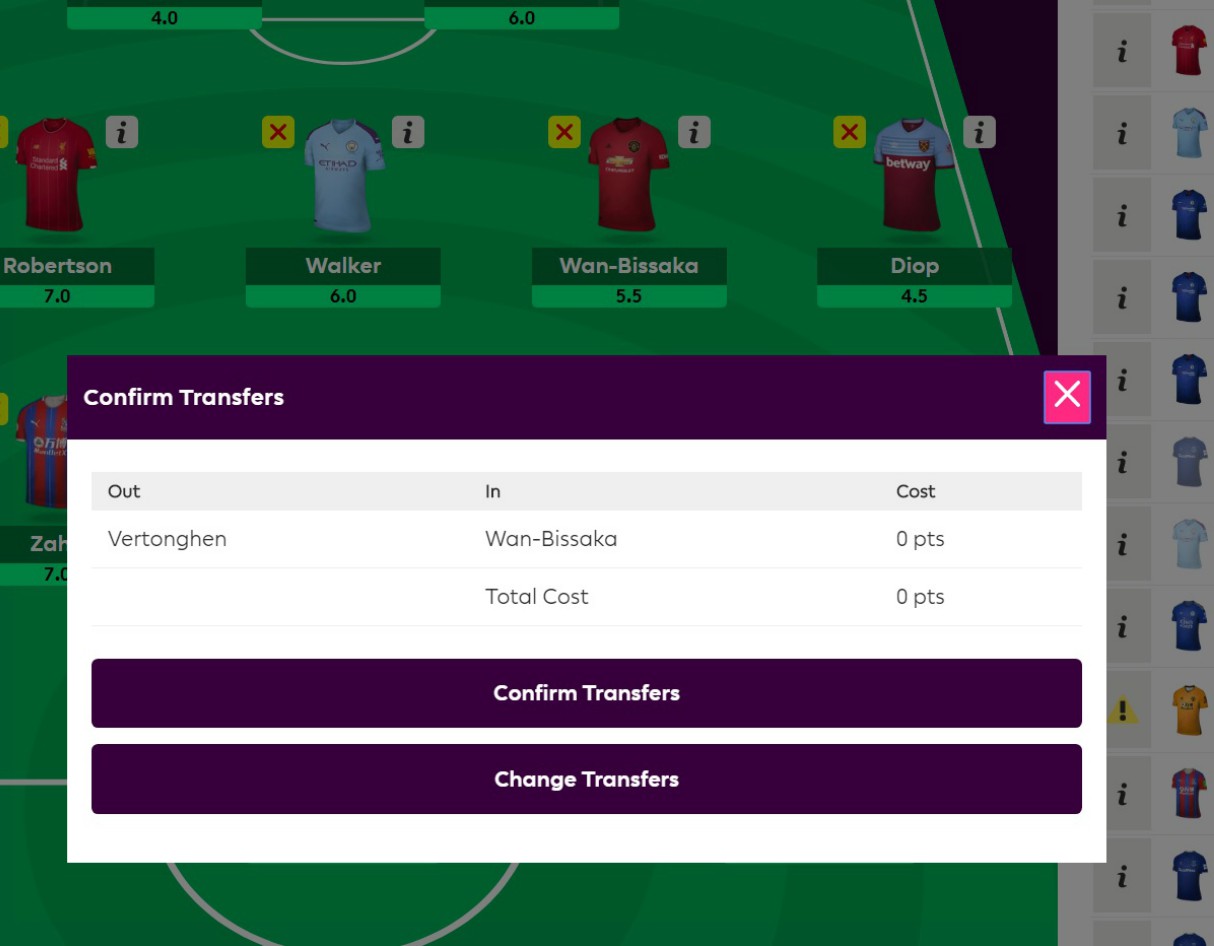 And with that, you’re ready to play Premier League Fantasy! If you have any questions, ask them in the comments below or head over to our Twitter!