Howdy all, in my last post I picked my British & Irish Lions Backline for the summer tour against the South Africans, this post finishes off my selections. Based on the Six Nations games so far, here is my starting line up for the forwards. 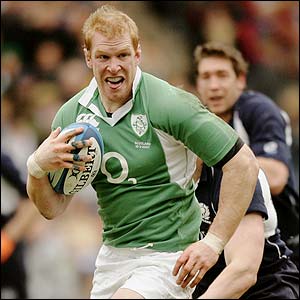 1. Gethin Jenkins (Wales) – The welsh loose-head was the number one choice for the Lions in 2005, and with assured performances in the scrum and in the loose means that he should just pip Andrew Sheridan to the test side. For all of Sheridan’s size and power he doesn’t perform overly well in the scrum and his ball carrying isn’t that destructive. However he will be second choice and will make the touring party.

2. Jerry Flannery (Ireland) – The Munster Hooker will be keen to impress the selectors to gain a place on the plane. Having come to the international game late in his career he has shown that he has the class to perform.

3. John Hayes (Ireland) – A controversial decision but his scrummaging has stood out and to give the backs clean ball to attack the springboks the Lions need to have stability, and I think he can bring that.

4. Paul O’Connell (Ireland) – My choice for Lions captain. Ian Mcgeechan likes to pick big imposing players as his captain and O’Connell is an obvious choice, a true leader. Shown in the win against England last weekend and seems to be more of a calming influence than O’Driscoll.

5. Alun Wyn Jones (Wales) – If you go for O’Connell you have to have a player with considerable skill to compliment him and Jones is remarkeable, his line-out jumping is superb, and his ball skills in the loose is exceptional. How they will fare against the best second row pairing in the world of Bakkies Botha and Victor Matfield will be a big talking point on the tour. Another option for this position would be Nick Kennedy – the England lock performing very well this season for club and country, but I think his inexperience at test level will count against him.

6. John Barclay (Scotland) – My young player in the Pack. Barclay seems to have it all, and has an aura of a young Richard Hill about him, and is a lot more disciplined and worried about his game than James Haskell of England – who seems to worry more about his pay-check and himself than the performances of his team. Could turn into a fantastic player with the right tutelage.

7. Martyn Williams (Wales) – Brought out of international retirement last year at the request of Warren Gatland and hasn’t disappointed. One of the best sevens in the world at the moment. Should be one of the first on the team sheet.

8. Andy Powell (Wales) – Another player who came into the international fold late, he has turned into a destructive runner off the base of the scrum. With the pace matching that of many backs in the game he makes the hard yards and could get the lions on the front foot. Will be interesting to see how he fairs as he tends to run high into contact to look for the offload which could work against him if the South Africans tackle effectively.

So that’s the forwards, not many Englishmen in the reckoning at the moment due to their poor team performances and ill-discipline. Hopefully Martin Johnson can rid the negative mentality in the red rose camp and they can get some good results in the last two games of the campaign and put the players in the selectors minds. There will be injuries and poor form from players between now and the time the squad leaves. Let me know if you agree/disagree with my choice.

That’s all from me. Take care now, bye bye then.