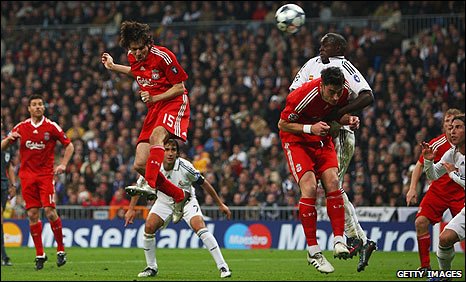 OK, so we have completed the first 8 legs of the Champions League Last 16 and overall it was a good week for the English clubs, here is my run down of the games;

Chelsea 1 – 0 Juventus
Didier Drogba popped up with only his fourth goal of the season to secure the spoils for Gus Hiddinks Blue army. With Claudio Ranieri back at the bridge, Chelsea held the majority of possession but Juve looked quite comfortable for most of the game. Though Chelsea could have been 2 up before Drogba springed the offside trap on 13 minutes. I feel Claudio may fancy his chances in Turin in 2 weeks time, but the game has 0 – 0 written all over it.

Real Madrid 0 – 1 Liverpool
Well he can do it in Europe can’t he?! With all the talk about Rafa’s future, he again showed why he is one of the most highly rated managers in Europe by nullifying a previously rampant Real Madrid and ending their 9 match winning streak. Pool were as solid as ever, and caught Real on the counter attack, and the pick has to be Alonso’s trademark own half lob which Casillas just got back to tip over. Torres was ineffective throughout and left the field after an hour with a niggle. With Yossi Benayoun heading in the winner from a Fabio Aurelio freekick with 8 minutes left. Gerrard will be back in a fortnight all going well and Liverpool will yet again stamp their dominance in Europe with a comfortable 2 – 0 win at home (If only we could do it at home!)…

Villarreal 1 – 1 Panathinaikos
Villarreal dominated throughout but struggled to make any meaningful chances, and those they did they just could not convert. The Greek side took the lead and the away goal when Karagounis’s shot went in off the bar. Ex premier winger Robert Pires was brought down inside the box and Rossi converted to save Villarreal blushes. I still expect them to go through over the 2 legs though. 1 – 0 away.

Sporting Lisbon 0 – 5 Bayern Munich
WOW, The German specialists disposed of SL like a perfectly engineered Audi! Franck Ribery opened the scoring, before Miroslav Klose bundled in the second. Ribery got his second from the spot and Toni grabbed the fourth from Ribery’s cross, and then the fifth from Frank’s throughball. The 2nd leg is really a given, but Bayern are my dark horses to take the trophy outright…

Tuesday 24 February;
Lyon 1-1 Barcelona
Lyon got off to the perfect start taking the lead after just 7 minutes through ex-Middlesborough playmaker Juninho with what can only be described as an amazing, yet cheeky freekick!! Lyon had the best of the first half before Barca came back after the break. With Arsenal old boy Henry doing the damage just after an hour and rescuing the point. It will be tough for Lyon away in a fortnights time but they are still a superbly drilled team, but Barca will sneak it 3 – 1 at home.

Inter Milan 0 – 0 Manchester United
Had all the makings of an absolute screamer, but for so many missed chances didn’t really live up to it’s billing. I felt Inter had to take advantage of United’s changed back line but they just couldn’t do it and didn’t really turn up in the first half, with both Ronaldo and Giggs going close for the away team. Jose obviously worked his magic at half time as Zlatan Ibrahimovic and Adriano started to burst into life but for all their pressure United’s new rear guard held firm. I’m going for a 2 – 1 win to United in the 2nd leg.

Athletico Madrid 2 – 2 FC Porto
An entertaining game, with end to end stuff. With Porto’s goalkeeper Helton in the thick of it. Maxi Rodriguez gave Athletico the lead, before Porto should have equalised when Lisandro had a dubious goal disallowed. Then up steps ex United Forlan, who’s pretty tame 15 yard shot went into Heltons hands, and somehow out again and into the net!!! Luckily Lisandro got the draw with his second of the night. I expect Porto to take the second leg pretty comfortably with their firepower, 3 – 1.

Arsenal 1 – 0 Roma
It was a tale of missed chances for the Gunners with Bendtner and Eboue the worst culprits. Arsenal got the lead they desrved mid-way through the first half after Van Persie was fouled in the box and got up to cooly convert the spotkick. It will be tough for Arsenal in Italy, but I think a 1 – 1 draw will get the Gunners through into the last 8.

See you in a fortnight!