Whether it was leading SC Cambuur to their first ever Eredivisie title or taking Rushden and Diamonds into the Premier League, everyone has their own nostalgic Championship Manager story. But nothing in the game could quite compare to discovering a new superstar.

Early editions of Championship Manager didn’t often get things right when it came to unearthing football’s next superstars, but it did still make otherwise less-than-illustrious careers that bit more notable. So from Swedish wonderkids and Belarussian world beaters, here are 10 of the game’s greatest heroes…

He was hardly discovered on the game, but there are few players quite as synonymous with CM as Taribo West. Rewind to 2001 and the golden age of Championship Manger, the Nigerian journeyman was still looking for a club when the game was released. That meant you could bag yourself a top international footballer completely free of charge. Start a new career, sign Taribo West. It was almost cheating.

In real life, West played for Auxerre before moving to Italy where he played for both Inter and AC Milan. You may not remember it, but he also had stints in England with Derby County and Plymouth Argyle (!), before finishing his career in Iran. However, he was probably best known for incredible hair and the green and white braids he had in the 1998 World Cup. Every football fan pretends to adore their unassuming but forever reliable right sided defender. And if you started a game on CM 01/02 in the lower leagues (as everyone worth their salt should), then Mike Duff was your man. The Cheltenham Town player could be picked up for a few thousand if you got lucky and would be a mainstay in your side for years to come.

Outside of the game, Duff won 21 caps for Northern Ireland and is one of the very few footballers to play in the top 8 divisions in England, making it all the way from the Southern Premier division with Cheltenham Town through to League One, to then play in the Championship and Premier League for Burnley. Nowadays, he’s called Michael and is managing Cheltenham in League Two – back where it all started. Ask any Evertonian and they’ll probably have very little to say about Ibrahima Bakayoko despite signing him for £4.5 million in 1998 – a big sum in those days. 4 goals in 23 appearances tells you all you need to know. He was quickly sold to Marseille for £4 million and nobody ever spoke about it again.

But on CM 97/98, Bakayoko scored goals for fun and was a job to manage. At the time he was only 20 years old and played for Montpellier, which meant you could get him for a fairly decent price. With 18 Pace and Shooting, Bakayoko was a linchpin of many a title winning side. Iceland may be known for their footballing ability these days but back in 1999, outside of Eidur Gudjohnsen, Icelandic footballers were a rare bread. Which is why a young striker at KR Reykjavík named Andri Sigþórsson was all the more exciting. Known for his ice-cold finishing, Sigþórsson could be bought for peanuts and had a maximum potential of 200 in the database.

In real life, Sigþórsson had a moderate career, starting in the KR youth set-up before getting a dream move to FC Bayern. He played a few games for Munich’s 2nd team before going back to KR and bagging 35 goals in 48 appearances. He ended his career playing for Molde in Norway and racked up 7 caps for the Iceland national team.

Was there anyone who didn’t buy Mark Kerr from Falkirk on Championship Manager 01/02? It didn’t matter what league you were in, £800,000 to £2 million on Scotland’s brightest 19 year old was well worth the investment. He was a leader, as well as a technician; 20 for Determination, Off The Ball and Teamwork, 19 Work Rate, 18 Stamina, listed as Preferred Foot: Either… truly a manger’s dream. Someone you’d want inside your dressing room.

Believe it or not, despite before 37 years old, he’s still playing too – doing it in the Scottish Championship for Ayr United F.C. He’s racked up hundreds of games in Scotland, having played for Dundee Utd and Aberdeen, but sadly he’s probably best known north of the border for a failed back pass in the 2008 Scottish Cup Final. 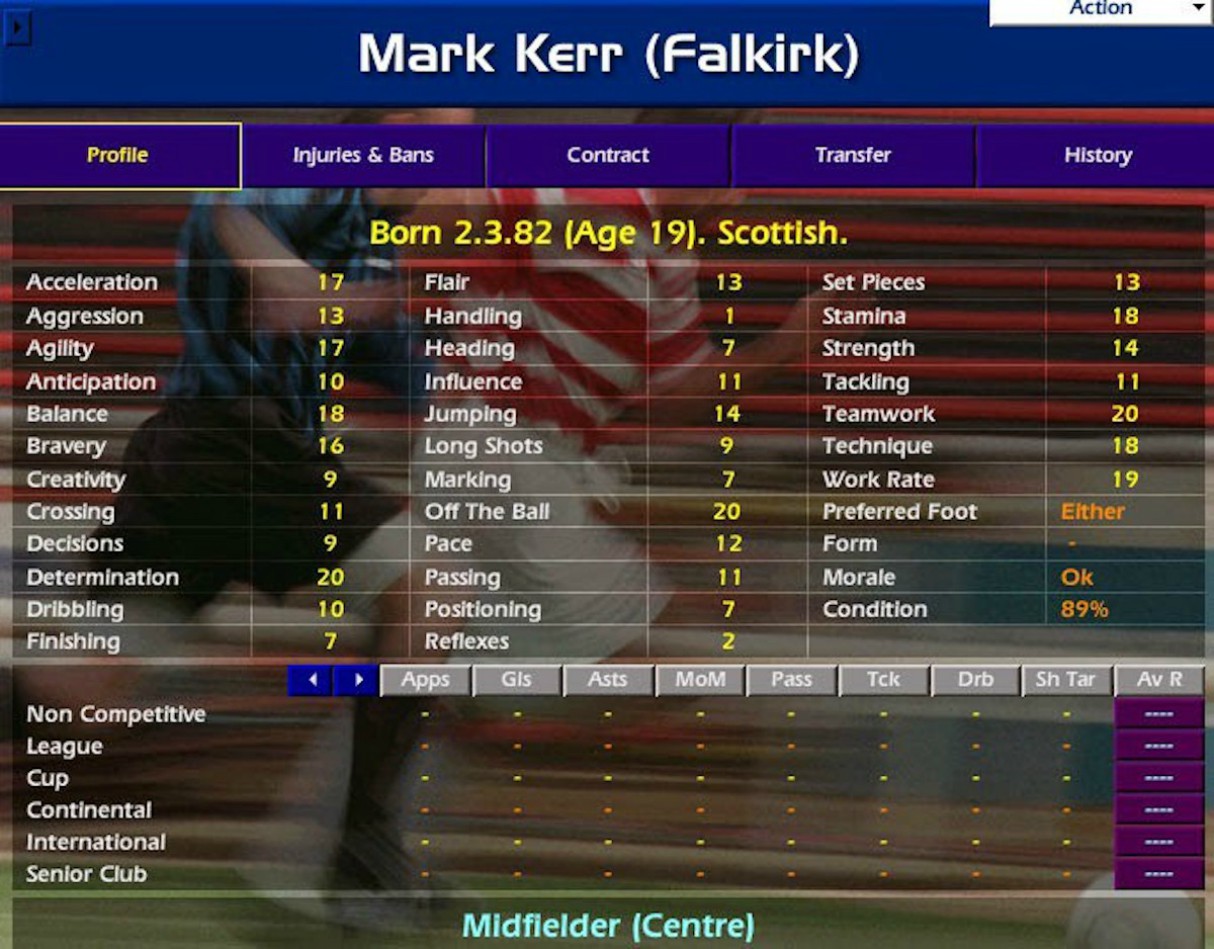 Making his mark in the 03/04 version of the game, Anatoli Todorov is the first Eastern European striker to make our list. Stats, youth and being cheap as chips made him CM 03/04’s first ‘must buy’. Sure, you usually had to wait for a work permit, but was it worth it? Speed, creativity, finishing… you’re damn right it was!

In the real life, Anatoli Todorov has had more clubs than possibly even Steve Claridge, but is still doing it in the nether regions of Bulgarian football at 33 years old. He plays for Spartak Pleven and actually isn’t a striker at all – he’s a creative (sort of) midfielder with a healthy scoring record.

As well as being the best named footballer in the history of the game, Tonton Zola Moukoko was also the man to go to if you needed someone to play behind your two strikers. Available from Derby County for around £500,000, the young Moukoko didn’t take long to settle into first team football and became a key member of a stacked 01/02 cast list.

In the real world? Well, he started his youth career Djurgården in Sweden and was courted by some of Europe’s top clubs before deciding to go to Derby. Unfortunately while in England, his brother suddenly died – something Moukoko cites as a reason for his lacklustre career. He went on to play in Norway and again in Sweden before starting his own club in 2013: Kongo United FC, who are currently competing in the seventh tier. 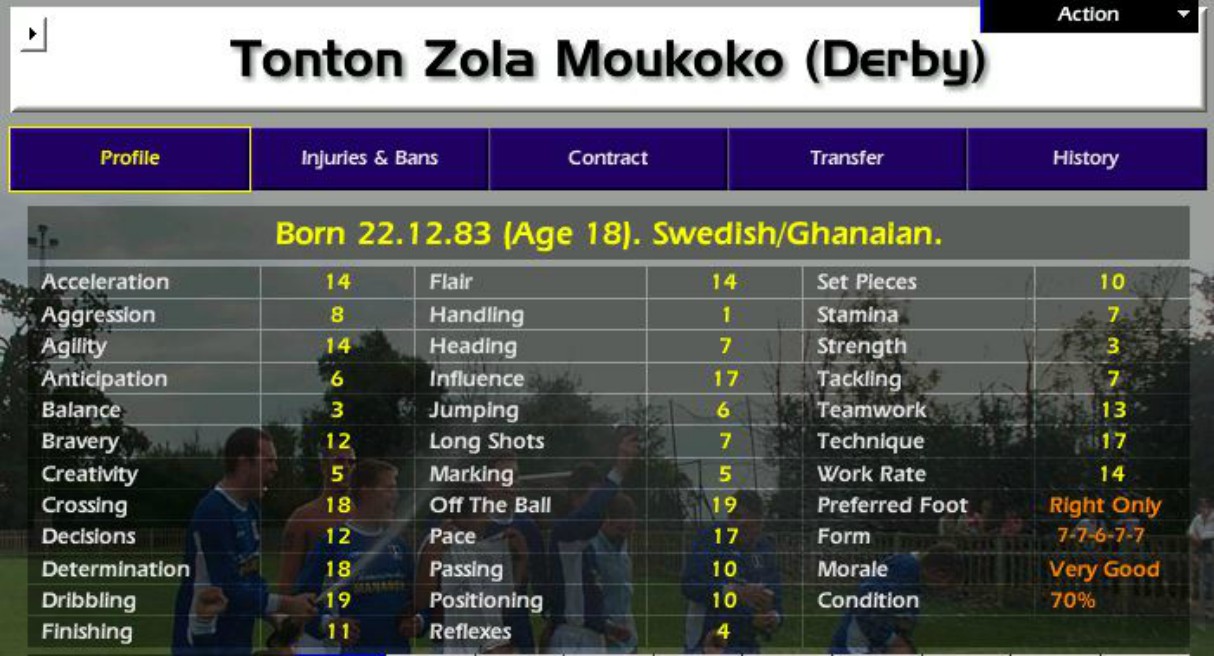 Named after John F. Kennedy himself, in Championship Manager circles Hammarby’s Kennedy Bakircioglü is every bit the icon JFK was. Nobody could pronounce his surname but that didn’t matter. Bakircioglü was the driving force in midfield, often popping up with crucial winning goals with late arrivals into the box.

Outside of the game, Bakircioglü is probably the most successful footballer on our list outside of Taribo West. He represented Sweden 14 times and played for Ajax and Racing Santander, among others. He also had trials at Manchester United when he was younger. He retired last year having returned to Hammarby in 2012. Available for less than £2 million in CM 01/02, goals, goals and goals were guaranteed from Dinamo Minsk’s Belarussian wonderkid Maxim Tsigalko – a feat which is especially strange because that’s not even how you spell his name. Though a real player, Maxim Tsigalko was actually Maksim Tsyhalka. Whatever his name was, Tsigalko is Championship Manager royalty.

Like his name in the game, Tsyhalka’s career was a case of ‘so close but yet so far’. Having had a career plagued with injuries, he retired at the tender age of 26. That said, our man did make it to the international arena with Belarus, making two starts and scoring one goal against Uzbekistan. It couldn’t be anyone else could it? Cherno ‘Champ Man’ Samba was a much-touted English striker when he signed for Millwall in 2000 – unsurprising really when you consider he scored 132 goals in 32 games for his youth team. The makers of CM 01/02 clearly read that stat too as Samba was a colossus. Strength, Pace, Finished and Heading, Cherno could do it all and quickly.

In the cold light of the real world, despite representing England at every youth level up to the under-21s, Samba never made it. His entire career lasted little more than 50 games, with only 15 goals to show for it. He did, however, score at full International level for The Gambia. Probably the best it ever got for Samba was a delivery time once got cut from 2–3 months to next-day delivery as the company were a fan of the game.

Whatever his career, for those of us at a certain age, the name Cherno Samba will always mean something. He was the undisputed King of Championship Manager. Who was your ‘go-to’ signing on Championship Manager? Let us know in the comments below and join the conversation over on Twitter!