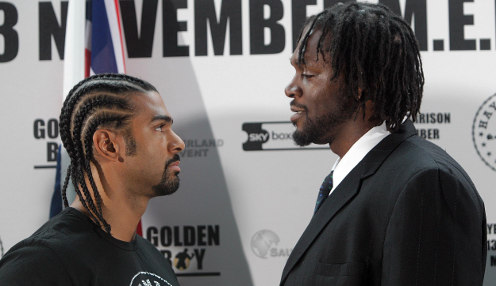 So here it is, we are just days away from the touted ‘biggest fight in British boxing’, David Haye Vs Audley Harrison. Now at a quick glance everyone is writing off Harrison and firmly backing Haye, however as the fight draws closer more and more people are thinking Harrison may just be able to provide an upset.

Lennox Lewis was recently quoted as saying ‘Audley’s definitely got the power to stun the world and upset everybody’s thinking’. Now you could argue Lewis is a touch biased as Harrison’s mentor for many many years, but you can’t doubt the greatest British Heavyweight has a point. Audley has crazy power in his left hand, and he will only need to catch Haye once to prove his point. However you can say exactly the same about anyone who Haye has fought so far.

Haye is to quick for Harrison and will prove it on the night, he has been remarkably quiet in the build up and has just let Harrison do all the talking which shows to me, he is very focussed. Generally I would say Haye on points, but he wants to prove a point and finish Audley’s prolonged and let’s be honest, failed pro career. Now of course you can watch this on Sky Box Office, however I am sure there will be many live streams floating around the net if you are into that kind of thing…

My prediction? TKO in round 4.