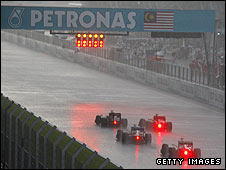 Jenson Button’s near perfect start to the the F1 season continued in Malaysia after winning the race after the Grand Prix was stopped because of heavy rain. All drivers received only half points due to the early stoppage, only the fifth time in F1 history.

A terrible start which saw Button drop to fourth, after Williams’s Nico Rosberg, Jarno Trulli and Renault’s Fernando Alonso all went through. However Button was back up to third after turn 13, overtaking Alonso. The Brawn GP driver then made the most of bad conditions, as the rain started to fall on lap 17, while most drivers pitted, Button reaped the rewards of staying out two laps longer than race leader Jarno Trulli to clock the fastest laps of the race – taking a second off any other and put him into the lead.

From that point on Button was in control and by lap 26 – when most cars drivers were using extreme wet tyres – the Englishman had established an 18 second lead over Rosberg in second. However with the rain still falling, all drivers were struggling to adapt to the wet conditions and were going 22 seconds slower per lap, on average, than they had been when it was dry.

With safety as the prime concern, it was no surprise when the arrival of the red flag after 31 laps halted the race. Motorsport’s world governing body, the FIA, decided the race could not be restarted as the allocated time was fast running out when lightning and torrential rain had eventually passed.