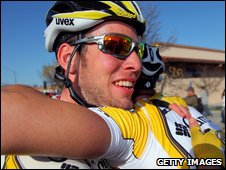 Mark Cavendish secured his second consecutive stage win in the Tour of California as he once again beat Belgian’s Tom Boonen in a sprint. Mark one by just over a bike length to prove he is one of the fastest sprint finishers on the planet, even on my twitter, 7 time tour de France winner Lance Armstrong put ‘Congrats to Cavendish on winning another stage. Kid’s fast..’.

Cavendish is still about 30 minutes behind leader Levi Leipheimer with Lance Armstrong in fourth. Lance is expected to win today’s individual stage on his stolen / recovered TT bike.