Update: Michael Schumacher will come out of retirement and replace Felipe Massa at the European GP next month on the 21 August 2009. Due to the new ban on in-season testing Schumacher will not be able to drive a 2009 car in the next few weeks. 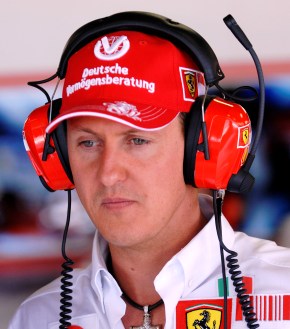 “Ferrari intends to entrust Michael Schumacher with Felipe Massa’s car for as long as the Brazilian driver is not able to race,” a statement said.

“Michael Schumacher has shown his willingness and in the next few days he will undergo a specific programme of preparation at the end of which it will be possible to confirm his participation in the championship starting with the European Grand Prix.”

Reports out of the European F1 scene overnight are fuelling rumors that ex-world champion, and current Ferrari advisor, Michael Schumacher could be making at shock return to Formula while Felipe Massa recovers from his recent crash in Hungary.

‘We have said before that it is possible that Michael Schumacher could return to help us out… We have two test drivers at Ferrari (Luca Badoer and Marc Gene) at the moment and Michael is an advisor. We have not spoken to him, but it is possible that this might happen. But we will have to wait and see what happens. It is something for (Ferrari team principal) Stefano Domenicali to consider over the coming weeks.’

‘It’s really up to Ferrari. They must first decide what they want to do. And if they decide to ask Michael, they would then talk to him and he would think about it. But the decision could be just as well negative.’

Interesting to see how this pans out over the next few days….: