Well Christmas is now over, and while you are progressing with your new years resolution of losing the mince pie & beer weight (Or breaking them within a day as I did!) February has come round like a shot. Which means only one thing in the world of Rugby Union, the 6Nations is back. Ugly men battle it out again to be crowned the top national side in the Northern Hemisphere. As the late Bill Mclaren would have said ‘It’s a Marvellous Occasion’.

How will the teams fair this time around? Find out below.

With talismanic Captain Sergio Parisse injured, The Azzuri will struggle. However it may give some of their younger players the chance to step out of his shadow and come to the fore. As always they will be difficult to beat at home. As their pack are strong and abrasive. But their game will all hinge on the performance of Craig Gower, the Australian rugby league convert has chosen Italy as his adoptive home and if he plays flat to the gain line and moves their backline, they could take a scalp at home. However I think in the first game away in Ireland they will be outgunned and outclassed.

Final 6Nations Position – 6th (Ever improving, the loss of Parisse will hamper their efforts significantly, people say one man can’t change a team, in this case – they can)

Many are tipping Ireland to be in with a shout of the Championship and I tend to agree with them. They have an exciting backline, 3 of which were part of the British Lions starting backlines against South Africa in the summer. With Jonathan Sexton injured, Ireland have looked to Ronan O’Gara to stand in and steady the ship at 10. In my opinion he is a weak link, top sides target him in attack and pressurise him in defense and he crumbles, however against Italy at Croke Park he will have an outstanding game, its when he confronts a French back row on the top of their game he will not fancy it.

With a dynamic and skilful back row trio of Dusautoir, Ouedraogo and Harinordoquy, and the physically imposing and abrasive Bastareaud and Jauzion in the midfield, France will be a tough nut to crack. And with having a side good enough to leave wing Vincent Clerc on the bench is going to be handy. Their downfall will be their gameplan. With coach Marc Lievremont insisting on playing Francois Trinh-Duc at 10, their game will resort to more of a kicking for territory game rather than using their strengths.

Scotland are becoming rugby’s fastest declining nation. Throughout the last decade they have failed to make it into the top two of the Six Nations table. Now is the time according to head coach Andy Robinson, to stop the rot. They need to put in the same performance every week as they did against Australia in the Autumn, and hope that every side will self destruct like the Wallabies did. I can’t see that happening in a 6Nations fixture though. Scotland will rely too much on the influence of Chris Paterson – who earns his 99th cap when he steps onto the field against France on Sunday. If their pack can compete and disrupt the French, Paterson can kick the goals and keep them within touching distance of les Bleus.

Final 6Nations position – 5th (Only 1 win away to Italy, maybe a point in it)

With Lee Byrnes farcical 2 week ban for walking onto the pitch when he shouldn’t being rescinded, the welsh full-back will start on Saturday against England, which is a huge boost to them. He is arguably the best full-back in the world when on form, and if they can get the ball moving and get Ryan Jones going forward at No.8, they will make yards. With my player of 2009 Jamie Roberts being a perfect foil for the pace men outside, they should play some exciting rugby. I personally think that having James Hook at 13 is a mistake, and I hope I’m not proved wrong at the weekend! With their two first choice scrum halves injured, Gareth Cooper, whilst not being first choice for Cardiff Blues, has been selected to wear the number 9 Jersey. He has 44 Welsh caps to his name, but I think being slightly rusty at test level will prove to affect him. I hope England can get a shock win over Wales on Saturday but unfortunately I can’t see it.

With the six nations coming up and Martin Johnson named his Elite player squad I got a bit excited at the prospect at seeing a young and dynamic side playing, with players like Dan Ward-Smith, Courtney Lawes, Dan Cole, Ben Youngs and Chris Ashton. This looked to be a bold decision, to move forward with young players with a view to blooding them for the world cup, might have a few losses but never mind.

Come to selection for the Welsh game on Saturday and it seems as if all these players were forgotten, Tim Payne is brought in at Prop, the Spring Chicken Simon Shaw partners the ‘Coaches Captain’ Steve Borthwick, and Nick Easter trundles into the number 8 slot. My question is where is the dynamism to get go forward ball for our exciting backline to play? With Riki Flutey and Matthew tait in the midfield they need go forward ball for them to attack Wales on Saturday. Unfortunately I think that England need a rethink and some players need to stand up and be counted a la their current coach under Clive Woodward, where that side was driven by the players, and guided by the coach.

I am pleased for Matthew Tait that he has been given another chance at 13. It has been a few years of finding himself after his baptism of fire against Gavin Henson in 2005. I think he is a cracking player, and hope he can shine against James Hook on Saturday.

Final 6Nations position – Unfortunately 4th. The prospect of watching boring up the jumper rugby and giving the backs static ball is too 2003. The game has changed.

Ireland vs Italy – Ireland by a mile, Italy will unfortunately crumble in the Croke Park cauldron

England vs Wales – I would like to say England but up against a side that has included 10 Lions in its starting line up, I’m going to have to say Wales

Scotland vs France – Will be very close, but France will take it.

So there we have it, controversial? Have you already stopped reading as you think rugby is naff? Watch a game over the weekend, then tell me its naff!

Til the next time! 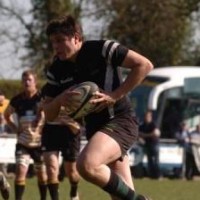