In an era where the crash-bang-wallop format of Twenty/20 continues to tread on the toes of the traditions of Test Cricket, this summer’s action has once again demonstrated that The Ashes stands firm as the most prized contest in the game both here and Down Under.

A quick inspection of the ticket sales for the five Test Matches in England this summer is testament to the claim, with most seats snapped up months in advance and within hours of their release. Indeed, The Oval Test Match sold out its entire allocation more than eight months before the first ball was due to be bowled. So why is it that this nation becomes so absorbed by the trials and tribulations of an Ashes Series?

England have played their part in a number of enthralling Series with the world’s top countries in the past few seasons, but nothing compares to the atmosphere generated when the Australians come to our shores. The rich tradition of this sporting rivalry – which clearly manifested itself during the British and Irish Lions rugby tour Down Under – adds a dimension that sets an Anglo-Australian contest apart from the others. All of a sudden the stakes seem to rise to a level that draws no comparison in the world of cricket; victory tastes that little bit sweeter, defeat all the more bitter.

The past two Series to be played on English soil, where the home side prevailed 2-1 in 2005 and 2009, were so absorbing in part because there was precious little to choose between the two sides. This summer’s Series has been billed by some as having less of an edge to it as a result of England’s supposed supremacy, but an assessment of the way the home team celebrated their victories at Trent Bridge and Lord’s would suggest that this is by no means the case. 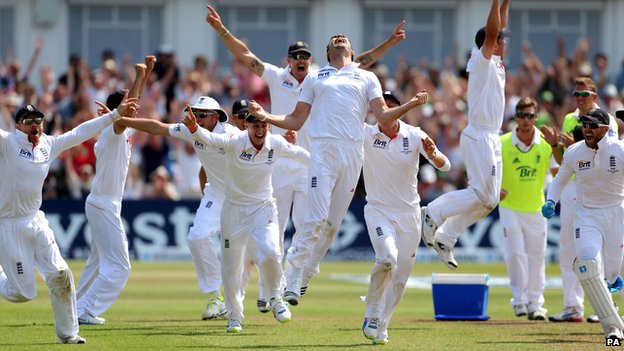 England’s players have faced questions from the media in the lead up to the 3rd instalment of this Series about the possibility of inflicting a 5-0 whitewash on the old enemy. What these pundits seem to have forgotten is that in spite of England’s dominance at Lord’s, the team scraped to victory in the First Test via the tightest of margins.

Australia might not have the same firepower they had to offer in their previous tours of England, but they are a proud cricketing nation who will demand a decisive response to the demoralising defeat at the Home of Cricket two weeks ago.

And so it is against this backdrop that the players head to Old Trafford. England continue to sweat over the fitness of Kevin Pietersen, but will take comfort from the fact that his deputy – James Taylor – made an unbeaten century against the tourists for Sussex in a Tour Match last week to demonstrate that he has the temperament to fill in if needs be. Conditions will supposedly be conducive to spin and Monty Panesar has been drafted in to the squad accordingly, alongside a previous Ashes winner in the form of fast-bowler Chris Tremlett. I would, however, be very surprised to see any changes to the English side. Playing two spinners would greatly increase James Anderson and Stuart Broad’s workload, and alter the balance of the side, which seems unnecessary after the team performed so well last time out.

As for the tourists, the huge talking point surrounds David Warner’s return to the Australian fold after spending six weeks in exile as punishment for punching Joe Root. Warner is obviously an explosive character who can struggle to keep his temperament under control but after a shoddy performance from the Australian batting unit in the first two tests, surely they will take a gamble and throw him into the mix in Manchester. It is a risk, but with England holding all the high cards and the Australian team staring down the barrel of a third consecutive Ashes Series defeat, it is one I expect them to take.

And so on a ground where Shane Warne bowled the ‘ball of the century’ in 1993 and where an estimated 10,000 people were turned away on the final day of the 2005 test, here’s hoping for an equally gripping occasion as the latest chapter of the Ashes gets under way.

We will keep you up to date on all the latest action over @averagejoesblog.