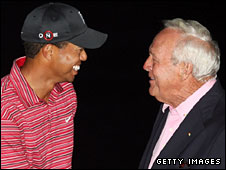 Quick birdies on the second and third holes started Tiger on the front foot, though he did drop a shot on the
fourth. Further birdies at seven and eighteen sealed victory by one shot.

“It feels good,” he said afterwards. “It feels really good to be back in contention and feel the rush. It’s been a while.

“I hadn’t been in the mix since the US Open, so it was neat to feel the heat on the back nine again, and got myself into the hunt and into contention.”

Asked about how his rivals cope with such a final-day charge, Woods added: “I’m trying to beat them just how they’re trying to beat me. It doesn’t change.

“It’s just about being there and somehow timing it right, and making putts and pulling off shots at the right time.

“Some guys put themselves in contention more times than others, but still, we’re all trying to win tournaments.”

Harrington finished on one over.

With the first major, the Masters just around the corner, it seems Tiger is coming into form just at the right time.