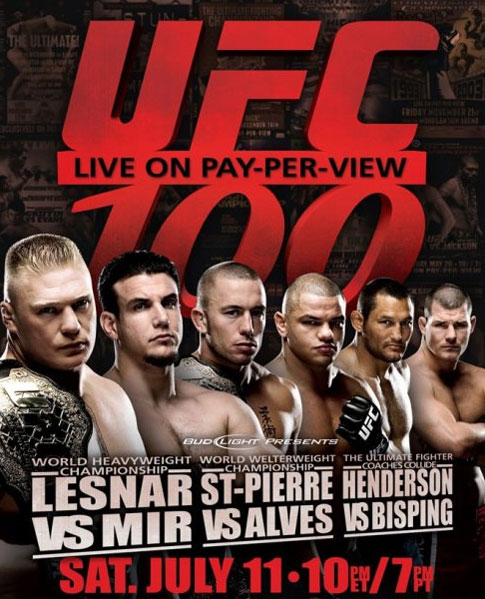 So it’s almost time for a momentous occasion, UFC hits 100 and with it possibly (make that definitely) one of the best fights cards you’ll ever see! Two title fights and one which pretty much guarantees the winner a title shot. With some other big names finishing off this card it’s definitely one not to be missed!

So to the first fight of the big three, which see’s Dan Henderson Vs Michael Bisping. The two Ultimate Fighter coaches go head to head after Bisping’s UK team destroyed Hendo’s US team on the show and in the finale. Hendo is an absolute legend with a heavy right hand and Greco skills that he took all the way to the Olympics on more than one occasion. Dan hasn’t had the best time of it since returning to the UFC, he is only 2-2 but to his credit, the 2 losses have been championship fights against Rampage at Light Heavyweight and Silva at Middleweight. You know the guys got a chin when he goes 5 rounds with Rampage. Dan hasn’t actually finished a fight since being in the UFC again however I’m sure he will be looking for a big knockout, sense tells me however that he’ll just out-wrestle Bisping and win his third straight decision. He has stated that he doesn’t think Bisping’s stand up is better than his but whether he’ll take that chance we’ll see. So onto Bisping, an impressive 7-1 in UFC fights out of the TUF house with his only UFC and career loss coming via split decision loss to Rashad Evans at Light Heavyweight. Since that fight he is 3-0 at Middleweight, destroying Charles McCarthy and Jason Day before winning a tactical and subdued decision against Chris Leben. Bisping has been working on his wrestling and has even gone as far as saying that Hendo won’t have an advantage in that area. If he has worked in wrestling enough to stop Hendo taking him down he’ll have done a good job but I feel he’ll have to really hold back on his stand-up for that to happen. He may even go for a takedown himself but I think Hendo is too experienced to get flustered fighting off his back. My prediction for this fight is a boring decision for Hendo or a 2nd round TKO for Bisping.. I’m going to be English and go for the latter. (yeah, second that. British arrogance winning the day!!! – Joe)

The first 5 round title fight of the evening has George St Pierre defending his Title against Thiago Alves. GSP has won 5 straight since his loss to Matt Serra including 2 title defences, the second coming against another man considered one of the best pound for pound fighters in the world B J Penn. The fight against Alves is going to be a bit different as Alves is huge for 170 pounds and has some awesome power. Alves has a 7 fight win streak going beating names like Josh Koscheck, Matt Hughes and Karl Parisyan recently. Coming from American Top Team he is going to be in fantastic shape and ready for this fight. You may notice that every opponent for every fighter is always “Their toughest test yet” but for this fight it may be true. This is fight of the night for me with the fighters taking 2 rounds each from the first 4 and GSP taking the last to win a decision. (I can’t see this going the distance, assuming GSP protects his chin, which is a worry, I have a weird feeling GSP will submit Alves in the third… – Joe)

So onto the second Title fight of the night and the rematch! Brock Lesnar Vs Frank Mir, with Mir holding the Interim Title, Brock holding the real Title. The first fight between these 2 was Lesnar’s first in the UFC and only second overall, he came out of the gate like the monster he is and pounded the crap out of Mir. Many thought it should have been stopped but Mir kept his composure and rolled for a knee. Brock was never going to be defending anything going to his legs with his limited training so it was game over. It will be interesting to see if Mir’s ego loses him this fight, he thinks he can knock Brock out but I really doubt he can, 1 punch from those XXXL gloves and it will be night night for Mir. Mir does have a bit of a dilemma, how is he going to get Brock down and then how much improved is his defence? Mir’s only chance fight may be to fake a knockdown and roll for that knee again when Brock pounces. My prediction is the same as the first fight but this time the referee stopping Mir taking a pounding. (Tricky, Brock has size, but little else. Typical David and Goliath and for me Frank coming out on top to back up the fairy tail – Joe)

Other interesting fights on this card are Jon Fitch Vs Paulo Thiago, Fitch seemed to fall out of popularity following his loss to GSP, he then got an under card fight vs Gono which he won and is now mid main card against Thiago who has had 1 UFC fight in which he surprised himself by knocking out Koscheck! He is 11-0 though so is a serious fighter. Fitch by GNP in round 2 for me on this one.

Alan Belcher is full of confidence following Denis Kang beating him up before falling into a guillotine choke like some white belt, he believed he deserves a title shot if he wins against Judo player Akiyama. For some reason I don’t like Belcher so it’s Akiyama by submission in round 1.

The last main card fight sees the legend Mark Coleman facing Stephan Bonnar. Coleman apparently couldn’t afford a training camp when he faced Shogun which was why he was so bad and tired, looking to restart his career against Bonnar who desperately needs a win will be tricky. Bonnar is going to have too much cardio for the old man I think and knock him out in the 3rd. (I think mark Coleman will fall over on the way to the ring he is that unfit… Joe)

And if you like UFC, don’t forget to check out our UFC Ring Girls.