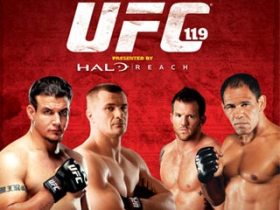 This weekend sees the return of UFC, with Frank Mir and Mirko Cro Cop facing off at UFC 119. Now I understand these may not be the biggest names in UFC, however this card has depth all the way through. We take a look at the fights, our thoughts and then we will be posting the UFC 119 results as they happen.

Frank Mir Vs Mirko Cro Cop
Cro Cop was one of the most eagerly awaited fighters ever to enter the octagon and UFC in 2006, and although he won his first fight, surprisingly lost his way after that. Some embarrassing losses meant Mirko slipped down the pecking order, and some even called for his retirement. But after a few recent wins, Cro Cop yet again has his chance, replacing the injured Antônio Rodrigo Nogueira against Mir.

Mir has had a topsy turvy few years, in which he looked to be dominating the heavyweight division again, beating Nogueira, Lesnar and Kongo. However after his last fight and surprise loss to Shane Carwin, people are again doubting his attitude.

If this was the original Frank Mir and Antônio Rodrigo Nogueira, I would have went for Mir, and to be fair I still do. But I just wonder, can Cro Cop turn back the years and knock out Mir with a headkick? Stranger things have happened…

Antônio Rogério Nogueira Vs Ryan Bader
Not to be confused with his twin brother (mentioned above), ‘little nog’ returns to the octagon against The Ultimate Fighter Season 8 winner Ryan Bader. With just a couple of UFC fights under his belt due to injury, little nog is still to prove his worth and comes up against a very tough opponent in Bader. People will argue Bader has yet to come up against world class opposition (Jardine being very flakey), however for me, his natural power will pull through the win against Nogueria. Expect a TKO from ground and pound in the second round.

Matt Serra Vs Chris Lytle
One of the most hated men in UFC, Matt Serra, returns to the Octagon against one of the most experienced, Chris Lytle. After Serra’s outbursts on TUF a few years ago, let’s be fair he never made any new fans. Yet lights out Lytle, has been there, done that, pretty much everywhere in the world and continues to improve. For me a pretty simple win for Lytle, he even has the ground game to keep Serra at bay but he will end up knocking out the midget, mark my words.

Sean Sherk Vs Evan Dunham
This is an interesting match up, previously Sherk would be a dead cert, but after years of controversy and injury you have to worry he may have lost his edge. For me the step up for Dunham is just to large, yes he beat well respected Tyson Griffin last time out, but that fight could have went either way. For us, Sherk will take a decision based on his intense work rate and start to climb his way back up the lightweight division.

Melvin Guillard Vs Jeremey Stevens
This could be the fight of the night right here. Guillard has had a huge amount of professional MMA fights, and in his last few outings has looked really impressive (even with his loss to Diaz). Stevens has recently bounced back after two tough losses and for me, he should just shade this. Guillard is just too inconsistent and i think this is going to be another one of those frustrating nights for his fans.

CB Dollaway Vs Joe Doerksen
CB Dollaway was hugely impressive during his time on TUF, however the experienced Doerkson will provide a much tougher opponent than what he is used to. Currently on a 7 fight win streak I really can’t see anything here but a Doerkson win.

Matt Mitrione Vs Joey Beltran
Argh, the actual most hated man in MMA (and I lose that term lightly), Matt Mitrione is back in the octagon for his second full UFC fight. Some may say a surprise winner over Kimbo Slice in his last outing, I am sure everyone was hoping for him to get a pounding. Beltran is a much stiffer test, beating the like of Houston Alexander in the not so distant past. Another Beltran win, and let’s hope he causes a fair bit of damage on the way…

Well that’s our thoughts on the main fights for UFC 119, agree? Disagree? Let us know below, or get us on twitter or facebook. Hell, I don’t think I am them all right ;-)

Love the UFC? You will love our ‘best of’ UFC Girls.