Well UFC hits Columbus on it’s yearly visit this Saturday and I have taken a quick look ahead to tomorrow night.

The headline fight doesn’t make a whole lot of sense to me, Jardine coming off the back of some inconsistent and not very flattering results.  Devastating knockout loss to Houston Alexander who was pretty unknown at the time, a split decision win over Chuck followed by another devastating knockout loss to Wanderlei Silva. Jardine’s last fight was then a split decision win over Brandon Vera.

Rampage on the other hand coming off a huge knockout win over Wanderlei Silva (I loved that fight! – stu) who had only just recently destroyed Jardine at the time.

I guess you can comment that they are both 1-1 in their last 2 fights although pretty different circumstances. 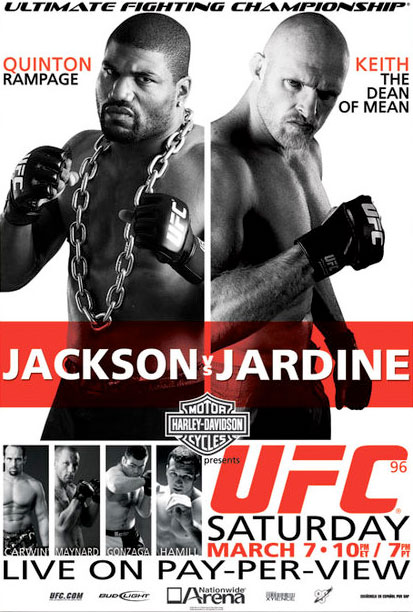 If Rampage wins expect him to get a shot at his old title against Rashad Evans, If Jardine wins the whole division gets a bit messy and I guess Rashad will end up fighting Machida first.  Even if it comes to the point where Rashad is Champion and Jardine is No.1 contender I have no idea what will happen as they are training partners and not sure if they would fight anyway…

Rampage will be on his second fight since moving camps to Wolfslair in the UK (Michael Bisping’s Base), he now has a Strength and Conditioning coach and a proper diet including supplements etc., this is a scary thing considering the guy was an absolute beast anyway!

Jardine trains at Greg Jackson’s camp and that guy is the master of the gameplan, the problem he may have in this fight as he doesn’t have much footage now Rampage has changed camps, except for the Silva demolition. This runs the risk of creating a gameplan and finding a different fighter than you expected when you try to execute it.

Rampage is most likely going to be concerned with leg kicks, they are what lost him the belt against Forest Griffin originally and what Jardine used to win a decision against Chuck.  In my opinion Jardine needs a gameplan which makes Rampage worry about the leg kicks so he can mix it up and catch him off guard.

From the fights against Housten Alexander and Wanderlie, Jardine’s chin has to be seen as a bit suspect, this poses a problem against a guy with the power that Rampage possesses.

I can’t see Jardine really being able to take Rampage down so I predict another big knockout by Rampage to set up a shot at Rashad.  Probably second round. (stu – agreed, but I actually have a feeling for a first round knockout!)

The other big fight on the card is Gabriel Gonzaga Vs Shane Carwin, this is a tough one to call. Carwin is a huge wrestler and is still a bit of an unknown with this being his first real test. Gonzaga as you may know comes from a BJJ background but has some wicked kicks to complement it (just ask Crocop!). If Gonzaga gets on top of Carwin I think it’s safe to say it’s all over, Carwin needs to try and do exactly what Randy did but whether he can execute that same gameplan is yet to be seen.

I think Gonzaga is too well rounded to lose this one and will win via TKO/GNP in the 2nd/3rd putting himself firmly back in the title picture. (stu – decision just swaying in the way of Gonzaga for me).

One big name to note is Brandon Vera who isn’t so much enjoying his move down to 205 and sitting right down the undercard. Lets hope he can string a few wins together and get back to main card status. Starting with tonight against Michael Patt. TKO in round one for me (stu – Big fan of Vera not sure what went wrong, headkick or knee to end it for me in the 2nd round)

The rest of the card is pretty much TUF alumni with a few new faces chucked in. Fights and predictions below;

Pete Sell V Matt Brown – Sell for a TKO in round 1 (stu – Brown is a tough cookie, Sell on a decision for me)

Matt Hamill V Mark Munoz – Hamill with a decision (stu – I think Hamill has under performed since losing that fake decision against Bisping, tonight he will get back on track with a TKO in round 1)

Gray Maynard V Jim Miller – Miller winning a tight decision for me. (stu – tight! Maynard seems a little one dimensional for me, Miller with a submission in round 2)

On a side note – check out Dana White’s video blogs on youtube which he does around every Pay Per View.
The blog from the night of UFC 95 was funny as and had a lot of Rampage being a funny guy, showing how relaxed he was even when in a training camp. Take a look below (and no that is not Dana’s double, but GSP LOL):