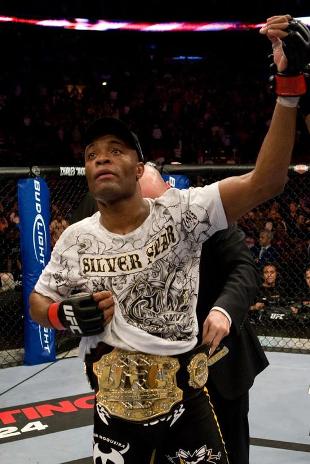 So UFC 97 is over and all the talk has of course been about the main event. It is just a shame that all the talk is negative and everyone is blaming Anderson Silva.

I feel that Anderson is being hard done by here, the way I see it is he’s the Middleweight champion, he’s one of if not the best P4P fighter in the world so he has nothing to prove. It’s the job of the challenger to actually challenge for the title and not just roll over and lay on his back.

Thales wanted to get it to the ground and managed it once in 5 round, even then he did nothing. If your gameplan is getting so badly stuffed and you know you can’t execute it you have to change. If Thales would have admitted that he can’t take Anderson down and decided to throw caution to the wind and try to catch Silva it would have been a much better fight. Mostly because Silva would have KO’d him in under a minute!

It was actually pretty embarrassing the way Thales kept rolling onto his back, he was even smiling because he had realised he had nothing and was scared of being KO’d so wouldn’t trade. I presume Anderson’s next fight will be against the winner of Henderson/Bisping and I guarantee that will be an exciting fight!! There are no other real contenders who have been beating top fighters.

So the Co-Main event was a bit more like it and unfortunately saw what is most likely the end of Chuck Liddell’s career. He didn’t look right in there and doesn’t seem to be able to take punishment like he use too. Shogun hit him with an outstretched left that couldn’t have been packing much power but Chuck went down and was finished.
I don’t think Dana White will let Chuck fight in the UFC again which I guess means he won’t fight again at all. Pretty sure his contract won’t let him join another org. Will be a shame to see him go but I think it’s got to happen now.
So onto Shogun, we didn’t really get to see if he’s sorted his cardio but he looked better than in his previous fight. He’s hinted that he would like a rematch with Forrest Griffin so that could be one to look out for and a real interesting fight with Title implications.

One thing to say about Stann vs Soszynski, if they are ex training partners why didn’t Stann know that he’d go for a Kimura and learn some defense?

The televised card was also saw Cheik Kongo defeat Hardonk. After a pretty boring first round before Kongo caught Hardonk and then finished a little while later from the resulting GnP. Surely Kongo is one big win away from a title shot now!?

Also shown were 2 great fights, Luis Cane vs Steve Cantwell with some great striking on display from both men and then Sam Stout defeats Matt Wiman in a crazy fight of the night performance.

So my picks went 8/12 which is a hell of a lot better than last time!

If you love the UFC, then don’t forget to check out our UFC ring girls.