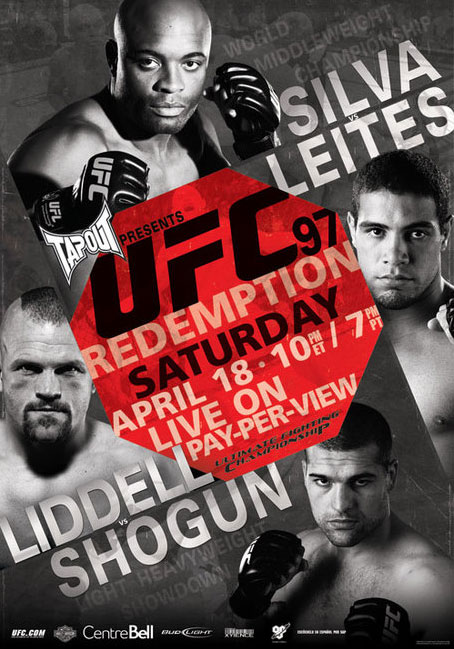 First of all, what a great card this is. When you have names like Denis Kang, Jason MacDonald, Nate Quarry and David Loiseau on the undercard it really does scream quality…

So the main event is for the Middleweight title and sees Anderson Silva Vs Thales Leites. Anderson Silva is back in the Octagon for the first time since his win over Patrick Cote who screwed his knee.
A lot of people moaned about that fight because Anderson didn’t seem himself so lets hope he is on fire for this one. Thales Leites also last fought at UFC 90 where he choked out Drew McFedries in the first round and is on a current 5 win streak. He is a dangerous BJJ black belt who will surely be looking to take Anderson down and work him.
Thales’ 5 fight win streak doesn’t sound so impressive when Anderson is currently on a 9 fighter. Anderson has been quite easy to be taken down in the past but he is also a BJJ black belt so I think it may take something special from Thales. I think Anderson will continue his win streak and do his possible best P4P fight in the world reputation no harm.
Lets just hope he doesn’t retire and turn to boxing like the rumours. I predict a Silva (T)KO in the second round after a pretty boring first.

Perhaps more mouthwatering than the main event is the fight between Chuck Liddell and Shogun. It’s not happening when they were both champions and at the top of their game as we would hope but they both have a huge amount to prove and this fight should live up to all the hype.

Chuck needs to prove to everyone that he isn’t too old and move closer to a title shot, Shogun needs to prove that the UFC wasn’t better than Pride all along and really make a statement if he wants to get back to the top of the 205 division as he was in Pride. Shogun’s last fight with Mark Coleman was pretty embarrassing even though he managed a TKO. He looks seriously out of shape and let’s hope his knee is properly fixed up and he’s ready to go.

Again Chuck is coming off a loss, a devastating knockout loss to Rashad Evans back in September and hasn’t knocked anyone out in a long time. I can’t see this fight hitting the ground and expect an onslought from Shogun, the problem being that Liddell loves to counter punch aggressive fighters. I’m really finding it hard to pick this fight, I think the Shogun of old will turn up but there is still a chance he will get caught. My prediction is….
(T)KO to Shogun in the second after an entertaining first with a couple of knock downs.

On a card this stacked I can’t see how Brian Stann vs. Krzysztof Soszynski made it to the main card. Yes Soszynski has just been on TUF and yes he lives in Canada but still. I know nothing about his opponent so don’t really want to comment.

What another great fight this could be, Cheick Kongo vs. Antoni Hardonk. Both heavyweight kickboxers it should be a great standup bout unless someone has a boring gameplan. I gotta go with Kongo for this fight with a 1st round (T)KO as he’s an absolute beast. Now training at the wolfslair in the UK, he’s getting better and better.

Luis Cane vs Steve Cantwell could also be another awesome fight. Cane destroyed the previously highly touted (and now dropped by the UFC) Sokoudjou and Cantwell won his last fight via a sick armbar where you actually saw the guys elbow pop. I’m gonna go for Cane in this one, 3rd round (T)KO and a real exciting fight.