Meet Madron FC, now you may not have heard of them, and they definitely don’t have household names such as Rooney and Messi in their lineup. However they are currently going for the title of the ‘worst football team in Britain’ after conceding a massive 227 goals in just 11 games this season, including a season starting 55-0 loss against rivals Illogan Reserves. 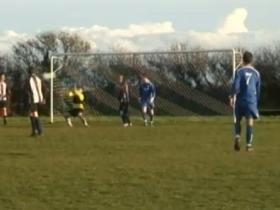 The team, based in Cornwall is currently managed by Alan Davenport, 68, and although admitting they may be the worst, has praised his players’ attitude. “I know everybody is probably laughing at us but we will battle on. We will definitely keep playing every week and fulfil our fixtures until the end of the season. We have no plans to stop.”

Just pointed out (thanks to @wibblefish) that Maldron aren’t even bottom of the league. Their rivals ‘Storm’ are currently sitting on -3 points… We can only assume it was a ‘landslide’ loss…

Click the video below for some ‘highlights’ of a recent game.