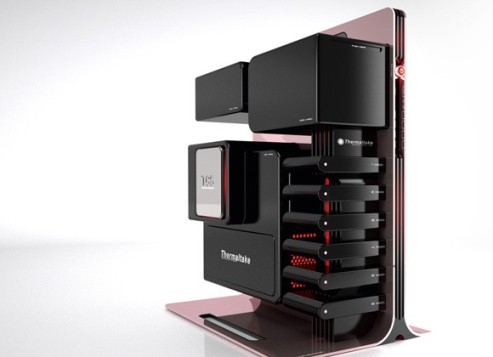 Once upon a time everything was beige and boxy, but the likes of Coolermaster, Thermaltake and Shuttle have taken us to a new level in PC design and made them more acceptable in the living room. Well Thermaltake have gone a step further who asked BMW DesignWorksUSA, to help design and create a new concept in high-end computing. Named the Level 10 concept the standard ‘box’ design goes right out of the window and in comes separate containers for each component.

other features include piano black surfaces, red LED lighting , USB memory key (which is also the on / off button and handles for transportation. Given the design i can see it could be good for cooling? Though I would worry about potential noise…

The gaming industry – a sector that can deservedly adorn itself with attributes such as visionary creativity, innovation and progressiveness. However, who inspires the gaming industry and how does one set trends in a sector that is in itself the embodiment of progressive thinking and imaginativeness? One answer to that question is currently being given by BMW Group DesignworksUSA, with the presentation of a design concept for a high-end gaming tower prototype that was inspired by the gaming world itself.

BMW Group DesignworksUSA, a 100% subsidiary of the BMW Group, has for many years shaped the global design landscape working for a multitude of industries. In addition to creating yachts, trains, aircraft, lifestyle and IT products, the three studios in Munich, California and Singapore are also engaged with design concepts aimed at transforming visions into reality. One of these concepts is named “Level 10” for Thermaltake, a manufacturer of computer housings and components for individually configurable high-end computers.

Design concept from another world.
The “Level 10” concept allows gamers to experience the power of their high-end computers through the design itself. In order to achieve this, iconic design is combined with optimum functionality and innovative details. By rendering the inside components visible, the design concept focuses on the architectural aesthetics which are inherent in the computers and result from each individually configurable component. The inspiration for this approach the design team took right from the computer worlds themselves – expressiveness, virtual townscapes and futuristic game components served as orientation for the arrangement and the look of individual components. These appear within the overall design in the form of an open modular structure that visually appeals to users, offering them additional functional benefits. Each high-quality component featured by the “Level 10” concept is enclosed within its own protective case, rendering it not only an integral part of the design but also guaranteeing interchangeability and transportability. Thus the design concept makes considerable allowances for the behaviour of users who wish to use their equipment in many different places and are eager to get it there safely. The concept also has an aesthetical answer to the physical necessity for best possible cooling, this also being associated with the virtual world of the gamer. The asymmetric arrangement of the robust vertical heatsink and the horizontally located individual components creates a strong architectural statement, clearly revealing the powerful cooling characteristics of the Thermaltake Gaming Tower.

Decisive game factor: Cleverly designed details.
Whilst the design concept initially appeals visually to gamers, clever detail solutions do justice to their high demands on the applications. A smart lock system facilitates the blocking of access in order to protect the valuable modules. A USB memory key was designed as an extractable “power button” that not only activates the system, but also secures personal system data, rendering it suitable for flexible use. Two ergonomically well-positioned, integrated handles allow safe and convenient transportation of the tower, a highly relevant feature in the high-end gaming tower sector. The design is rounded off by a cleverly devised cable conduit system and light features which communicate a multitude of tower functions such as temperature and memory volumes. Since the computer worlds themselves supply the context for the conceptual idea, an authentic design has been created that significantly emphasises the functionality of the Thermaltake housing and no longer needs to be concealed inside the chassis. The prototype of the “Level 10” tower can be seen from the 3rd to 8th of March at the CEBIT in Hannover. (Thermaltake stand hall 24 / C02).

BMW Group DesignworksUSA- Perfect design beyond the spotlights.
BMW Group DesignworksUSA is a global design consultancy and subsidiary of the BMW Group. The company, which was acquired by the BMW Group in 1995, now operates globally from its locations in Europe, America and Asia. Clients turn to DesignworksUSA for brand communications, strategy, research, design development, engineering, modeling, and color, materials, and finish. Unique to DesignworksUSA, they have both an automotive and industrial design studio, enabling the transfer of collective knowledge and inspiration from automotive design to product design and vice versa. The studio represents a guiding force for the BMW Group brand design studios (BMW, MINI and Rolls-Royce Motor Cars) and simultaneously operates as an innovation driver for the most diverse industries from IT to medical, lifestyle or aviation. Since 2004, Verena C. Kloos has overseen the strategy and operations for the Munich, Los Angeles and Singapore design studios. The designs consistently express the individual identity of a brand, so each product devised by BMW Group DesignworksUSA gains its specific uniqueness. Thanks to this approach the design studio stands out significantly from its competitors, convincing big brand names – from Microsoft and HP, Starbucks, Embraer, Advanced Medical Optics and Bavaria Yachts to Boeing Business Jets.