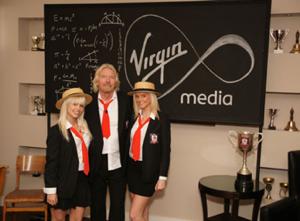 Reports coming out from Virgin Media, suggest a number of people are still confused by broadband and associated terminology. On the back of this Virgin Boss Sir Richard Branson is setting up ‘Broadband Schools’.

Virgin Media’s research of 3,000 internet users found that 44 per cent were left in the dark by the word ‘mega-bit’, one in three was scared of downloading due to ‘security issues’, one in ten thought Blu-ray was a type of broadband and worst of all, 17 per cent didn’t know what broadband was.

Cities with the least broadband knowledge, and where the classes are starting seem to be Birmingham, Belfast, Leeds, London and Wolverhampton.

And in typical Branson PR fashion, you may well see Richard, himself there (no doubt with the ladies);
‘As many of you may know I’ve never been terribly technical and I’m not at all ashamed to say that I’m probably a prime candidate for a Broadband School. I’m not alone, there are thousands of people in the same boat, and the only way they will ever learn is if things are kept simple. At Virgin Media we want everyone to feel comfortable asking questions, no matter how silly they think they are, so that they can get the most out of their internet service and enjoy everything the internet has to offer.”