The FIFA series had been in danger over recent years of offering not much in the way of noticeable upgrades. A few tweaks here and there was starting to wear thin on the FIFA fan base but, thankfully, the same can’t be said of this years release, FIFA 15. Although we may say this every year, this is without doubt the closest FIFA has come to the real thing.

This seasons game features all 20 Premier League grounds in stunning detail. From Turf Moor through to the Etihad every stadium looks spectacular. As you enter each game you get a fly-over view of the ground which helps to add to the added realism you get this time round.

In terms of the look and feel of the menu and game options it’s pretty much as you were. The menu colours and appearance have been given a spruce up but it’s the same layout as you found in FIFA 14 – if it’s not broke and all that. Of course you get the latest squads which is what most FIFA fans have been waiting for. Uniteds forward line of RVP, Falcao, Rooney and Di Maria will get you plenty of goals but in-keeping with the added realism you will concede a fair few as well. In the first few days playing against Diego Costa and Zlatan we found them almost impossible to play against. Strong as an ox and lethal finishing found us choosing Chelsea and PSG for our next game after getting hammered by these two. Individual traits like strength, skill and speed are really noticeable on individual players. Messi is still the highest rated player on the game closely followed by Ronaldo.

The added realism is really felt on the pitch. FIFA 15 sees the introduction of a ‘living pitch‘ that changes and shows signs of wear as the game goes on. So a wet and cold night game in Hull will end up with the pitch looking quite muddy and game-worn. Certainly not a game changer but a nice touch none the less. Next up is the look of each player. Every player has been dynamically modelled and look incredibly real. Add to that an extended range of emotions and you really get a sense of the players character through the game. 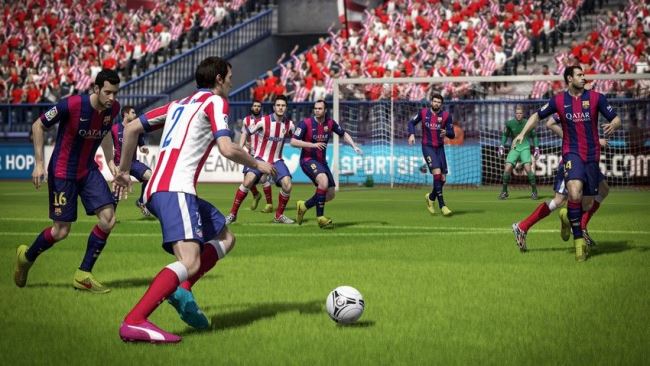 Although we were big fans of FIFA 14 we always found some of the in-game movements and passing a little clunky and slow. One thing you will notice straight away is how fluid and free the game now feels. Quick passing and crisp shooting really stand out which leaves you fully immersed in the game. We felt less frustrated than we have in previous versions although we did manage to lose 9-0 in our first few games. We have a valid reason for this – defending has been made a lot more difficult. The way you used to defend in FIFA 14 is now virtually redundant. Running alongside the opposition and nicking the ball now requires skill, precision and the right timing. This leaves you with two options. Learn how to defend or make sure you can attack and score plenty of goals (much like the so far failing LVG plan at Man Utd this season). We’ve found that we are scoring a wider range of goals in the game this time round with deflections and ricochets happening more often creating many unpredictable scrambles in the box. Never before have we scored a 25 yard free kick that deflected off the wall and looped into the top corner (we enjoyed it).

A few more in-game tactics are available like the option to push the defence up or bring them back at goal kicks and the ability to control the receiving player of a throw in are excellent additions. Taking control of these small elements gives you greater control of the game. The commentary is as excellent ever with the familiar Martin Tyler leading the way and Geoff Shreeves delivering the most useless non-injury updates on players. Just be careful when you play with Real Madrid and Gareth Bale as you will end up hearing ‘so how has Bale coped with move abroad‘ sound bites multiple times during the game.

To summarise FIFA 15 is quite easy. It no longer feels like we are playing a computer game that requires certain combinations of button pushing to acheieve results. The life-like feel of the graphics, pitches and gameplay fully immerses you into each game and makes you think like a footballer. Where to run, when to tackle and what formation to play all come in to play in every game and with the game so fluid and enjoyable to play we can’t see this one leaving our consoles until this time next year. 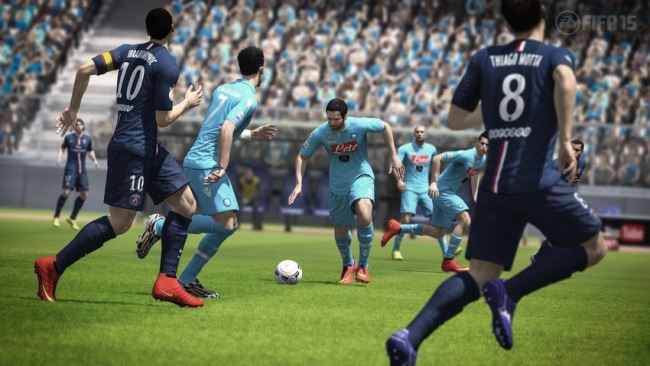