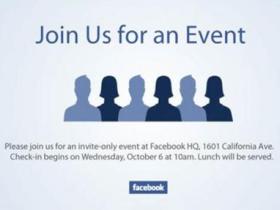 Update:
Ok to it turns out the Facebook fanfare was actually about as interesting as Mark Zuckerberg making his own movie. They are introducing new groups, similar to Yahoo Groups of old where you can create closed updates and share things with people. For me this is boring as sin, send us an email, we don’t need a conference. If Facebook continue to let themselves down, I hope everyone leaves!! Now I know you probably expect more, but we are really that un-enthused I can’t be bothered. Pop over to TC or something, but make sure you come back ;-)

Original:
If you haven’t heard the rumours, then your (2nd) favourite Social Networking site Facebook, is due to release big news later today at their conference at FB HQ. Now for our money, there are two main things that could be in the pipeline, the first being the Facebook Phone we mentioned a few weeks ago, or more than likely a new design of the Facebook website.

So if it is the latter, just as Twitter did a few weeks ago, what can we expect? Well our money is on;

Facebook Chat
As everyone knows Facebook Chat is complete gash and I for one don’t even sign in anymore. Expect better integration and more options. probably losing it from the bottom right and placing it somewhere else, with rumours on the left hand side. You might also see different options such as a pop out feature, and perhaps even voice / video features (rumours have been flying around with Skype). Though the latter would again raise security fears over entrapment and abuse. And you can bet Zuckerberg will be tapping into your feed and be enjoying the very same strip tease as you…!

Improved Search
Now that Facebook is tied in with Bing for search results, the FB crew are really hoping you never need to leave their site ever again. We expect a more prominent search and results areas and a way of displaying / sharing those results with your friends.

General
Generally you can expect a fresh look pretty much everywhere, including larger profile pictures and new ways in which events and groups are handled. The guys over at TC believe they have an idea of what the design will look like and we have included the image below. If it is, it looks pretty uninspiring and I just wasted my day writing this…. Lets hope for bigger and better…

More unlikely reports suggest an official Facebook Toolbar (boring). What ever happens, expect normal people whining on their statuses and expect businesses testing the new profiles to see how they can better utilise them to lure in customers, like, high 5’s and god knows what else. Whatever happens stay here for updates or of course just like our Facebook page. 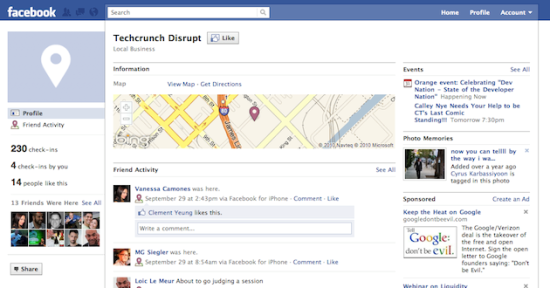