First person shooters and fans of the series rejoice: Sniper Elite 3 is released by Rebellion this week! Providing you with all that long range scoping pleasure you’ve been waiting for, the game is a welcome departure from the manic nonsense that Battlefield and Call of Duty have become. It will have been 2 years and 2 months to the day since Sniper Elite 2 was released via Steam, albeit with smaller Sniper Elite games popping out since then, and it looks like every passing minute has been spent on research and development: researching the weapons, landscape and historical context whilst also developing a game that fits realistically within these boundaries providing exhilarating gameplay, audaciously balanced with gory, realistic detail.

We got to play the first few levels of Sniper Elite 3 in an underground bunker, and lets get things straight, Sniper Elite 3 does its damned finest to be historically accurate (with some creative license) whilst still giving you the feeling of sickening self satisfaction of being able to see an X-ray image of a man’s testicles being shot clear of his body by your expertly placed shot from several hundred yards away. How can you get that balance exactly? I suppose the easiest way is to take what’s good from the last game and throw something new, or in this case old, into the mix.

Set in the midst of World War II, our hero Karl is stationed in North Africa, where his talents as an elite sniper (and it appears all round supersolider) are called upon to undertake dangerous missions into enemy territory to protect our boys, sabotage, kill the enemy and gather vital intelligence. Of course, its not a true-to-life stoty, but the vehicles, weapons and equipment are as much of a likeness as possible. The colourful landscape of Africa provides an interesting colour palette, of washed out desert yellows to the rich greens of the jungle. No more big, grey, dull urban landscapes. The amount of work that has gone into detailing the maps is certainly impressive and given that the way the game works now, every area of the map is vitally important. In certain sniper games, and certainly Sniper Elite 2 can be picked upon, the game is rather linear. Move here, shoot, move to the next place, shoot, rinse and repeat. It becomes dull and you find you breeze through rather quickly. Sniper Elite 3 is a change, allowing you the chance to choose your route, and even choose what targets you want to take down. As you’d expect on the next gen consoles, the depth is greatly increased, allowing for much better shots and concentration. In Sniper Elite 3, taking the shot is similar to the previous versions and feels rather realistic. You take up a position, scout about for the right enemy, get your sights up, zoom in, place the crosshairs over your target, focus your breathing and let rip. The X-ray Killcam makes a welcome return, showing the cross sectional impact of your bullet, and with the physics vastly improved its highly unlikely you’ll manage to nail same shot with the same bone fragmentation, organ bursting, blood spurting twice in a few days. Sniper Elite 3 is much more richly developed than just providing a set up for these Killcam moments, which, by the way, no longer are restricted to people – you can take a crack at vehicles too, often resulting in a glorious explosion. 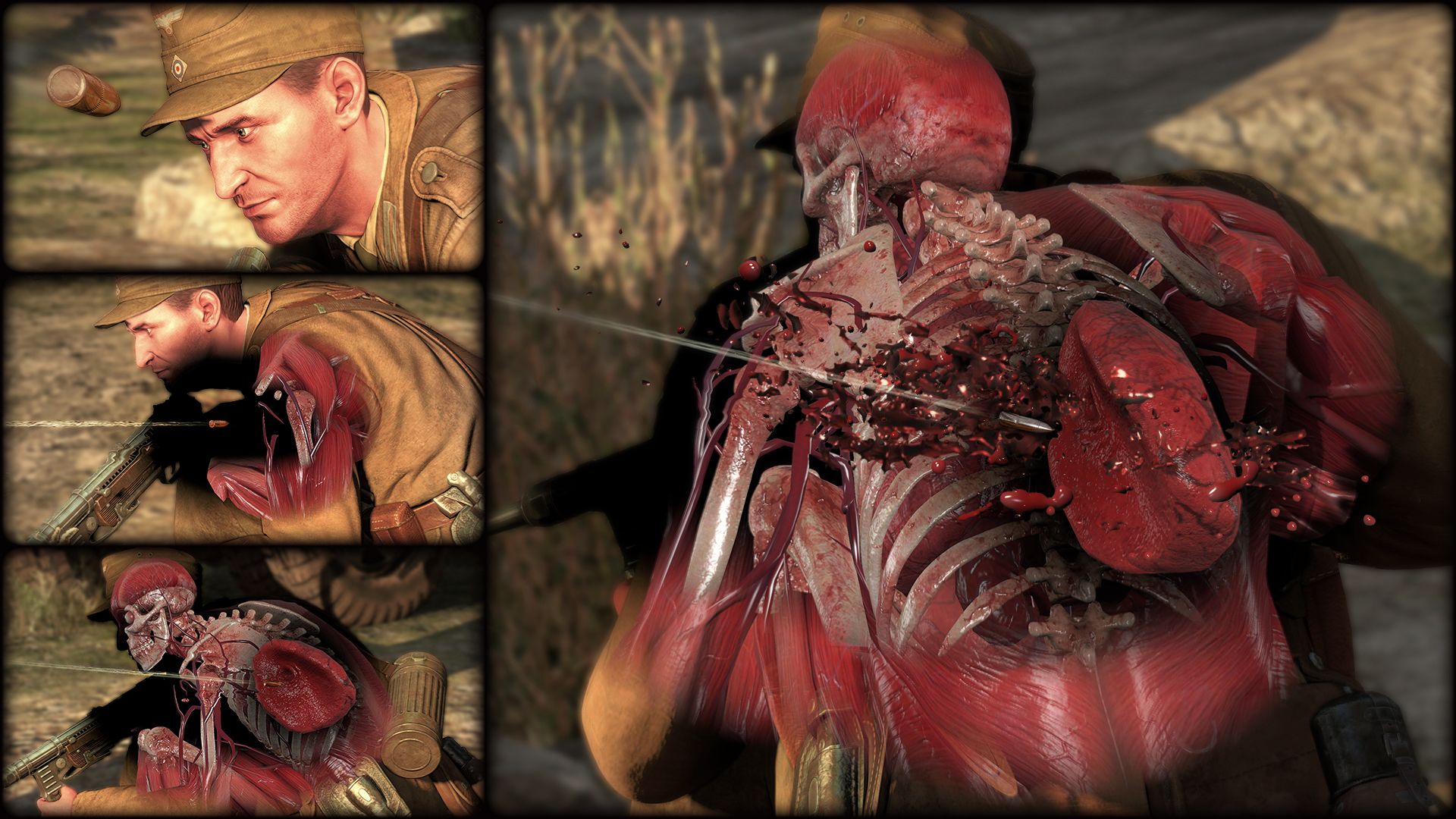 Sniper Elite 3 rewards you for playing smart. Sure, you can go in, guns blazing, chucking grenades and taking pot shots with your machine gun, but the emphasis is on stealth, smarts and creativity. If your position is uncovered, you have to relocate. However, you can now mask the sound of your gunfire by timing it with passing vehicles, other weapons barrages or sabotaged machinery. You can even light fires to attract and distract guards away from positions or into a kill zone. All of these result in different levels of XP, which is used to unlock new weapons, items and clothing. You can run through and kill everyone in 5 minutes, or take your sweet time and earn every XP point there is in Sniper Elite 3 to gain all the weapons, mods and outfits in the game.

Co-op makes a return in Sniper Elite 3, but we have not been able to give this a solid go yet, so cannot comment. What we can say is that, with the game due out this week, it should be regarded as a definitely purchase for fans of the series who like a little more brains in battle, those who like to play the waiting game, or those who are bored of the run and gun teenagers in BF and COD. Its very accessible and very fun to play. Hell, even that man Charlie Brooker is a big fan, and has had his likeness captured and recorded for the first DLC pack. What? I get to shoot Brooker? The most vitriolic man on British TV? Why not! Available on Xbox 360, Xbox One, PS3, PS4 and PC. 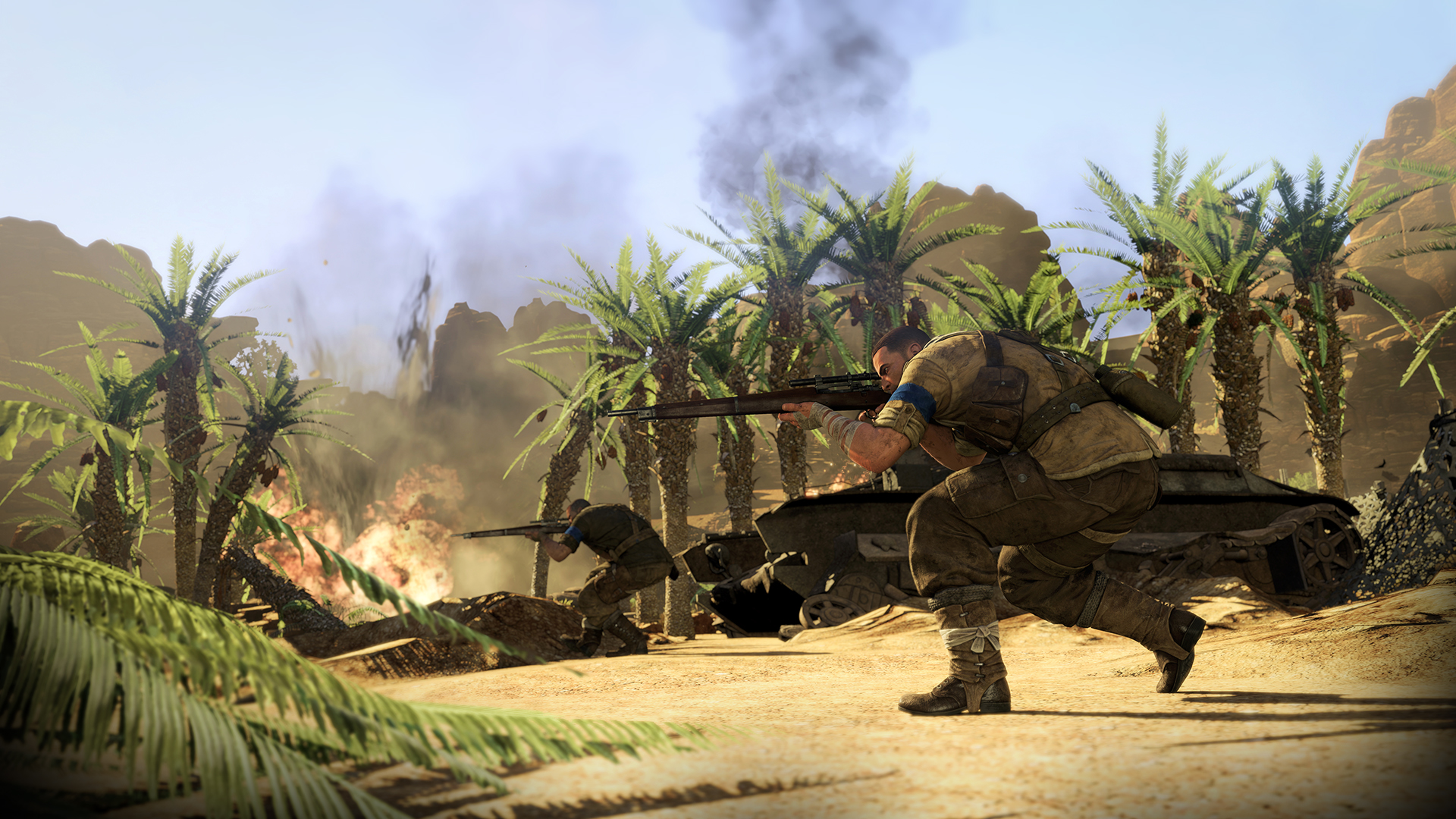