Your iPhone battery has died. Again. The painfully dark screen with the picture of the power and the plug feels patronising and incredibly inconvenient. Hardly surprising that these phones run out of juice on a regular basis though. Even for those of us that take good care of them notice that they don’t seem to last a full day any more! And if you have a 4s, Siri is an absolute killer – and whilst you may want to show off to your friends that you can ask your phone where to hide a body (if you haven’t, try it), the battery is long dead and you can’t fix it when you’re out and about. The solution to this, when out and about at a festival, days out or holidays, has always been the magical power pack option.

Third Rail is the latest innovation in a rather stale marketplace. Battery packs either come tiny and ineffective, or bulky and unattractive. This new system looks to turn this on its head as well as add some new functionality. 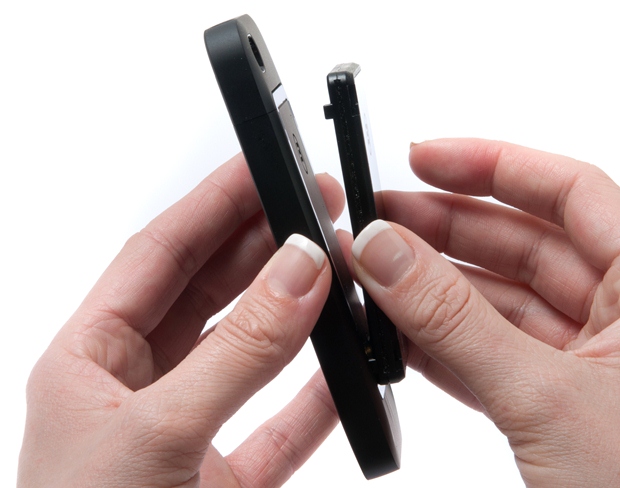 When I opened the box and saw an iPhone case as well as a battery I was a little perplexed, and the instruction book seems quite complicated given that battery packs are just plug in, turn on and off you go right? Well that’s not the case here (no pun intended). The case is sleek and pleasant enough, and doesn’t add too much to the dimensions of the phone. The bottom connector is no longer the typical apple socket, but rather a mini USB. On the back there is a shiny patch and a 3 pin connection.

The battery slides in to place on the back when you fancy using it, ensuring that it is out of the way if it’s not required. The connections involved don’t use wires, but a locking 3 pin connection that allows for seamless transfer of power. The functions of this battery don’t end there. There is also an out socket on the battery, so you can charge other devices from a USB cable. In addition, you can stack batteries on top of each other to provide more charge for your phone or other connected devices. Very handy!

However what is it actually like to use? Each battery, after a bit of breaking them in, can provide a charge of up to around 55-60% of my iPhone 4 battery. Of course, charging other things at the same time severely diminishes this. It isn’t a quick charge either, taking quite some time to fully transfer the power from the battery. However it does a job pretty well and doesn’t get in the way much at all. When out and about, its is quite hard to notice and the weight in my pockets was definitely barely different, especially when I had the battery detached and stored elsewhere. 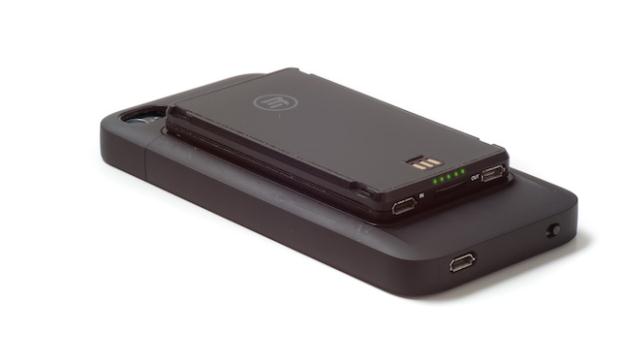 It is innovative, its breathing some fresh life into an area of the mobile world that needs it. It allows you to charge lots of things at once and use multiple batteries. It looks good and doesn’t weight much at all. It provides a handy cover for your iPhone that standardises the connection to what so many other devices uses. The best bit is obviously the ability to charge your phone out and about: roadside accidents, holidays, festivals, days out and any other time when your iPhone has died from mere regular usage.

On the other hand, the case severely limits your ability to use the phone with normal docks or accessories you already have and you’ve got to remove the phone every time. The battery, when attached, can be quite obtrusive and hard to handle. The battery only gives 5 LEDs as an indication as to its level or charge. Not to mention 60% extra battery power is hardly ground breaking, though it will get you out of a jam. More batteries = more bulk.

However, given its competition, the Third Rail is definitely leading the pack in originality, functionality and aesthetics. They don’t come cheap though! The case alone retails at £29.99, with the battery at £49.99 or of course a combo at £69.99. You can grab them over at Amazon

Oh, and try to avoid testing the third rail pin system by licking it – it gives quite a bit of a tingle (don’t ask me why I did it, I just did).